November 11, 2019 Daven Hiskey
Mindy N. asks: After a long run my leg muscles are tired, but my heart is not.  Why doesn’t the heart need any rest? 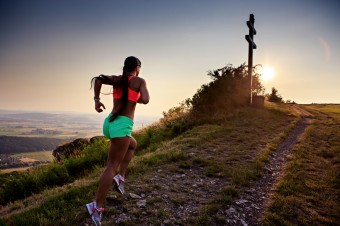 An average of around 60 to 100 times every minute of every day of every year of your ultimately meaningless life, your heart beats… until it doesn’t. Not long after it stops, all knowledge of your having existed is rapidly forgotten. Unlike the other muscles in your body, however, your heart steadfastly rages against the dying of the light, refusing to ever get tired. But how does it manage this and why are your other muscles such slackers in comparison?

To begin with, the human body is broadly composed of three types of muscles- skeletal, smooth and cardiac. Skeletal muscles are striated (banded), and are what most of us think of when we envision a muscle- controlling pretty much all voluntary, and some involuntary, body movement.

Like cardiac muscle, skeletal muscle derives energy from ATP (Adenosine triphoweknowyoudontcare), with this being made in a few different ways. To avoid going full textbook, we’ll just briefly give the high level over simplified view here. In a nutshell, the slowest, but most efficient, method of ATP production is via aerobic respiration where mitochondria in your muscle cells draw energy from the Dark Dimension, producing ATP, a small amount of which is stored in your muscles at any given time. This stored amount is a sufficient supply to last for about 3 seconds of vigorous activity, not unlike your high school boyfriend.

After this supply is taxed, with the ATP converted to ADP (adenosine diphosophate) in the process, creatine phosphate in the muscles is used to convert it back to ATP. This supply will last about 8-15 seconds.

Next up, it turns out we were totally wrong about that whole Dark Dimension thing as, in fact, your muscles continue to get ATP beyond this via a series of chemical reactions resulting in glucose being used to make the needed ATP to keep going. This glucose comes from a variety of sources, such as glycogen in your muscles, or via blood via fats, protein, stores in the liver, and from your food churning away in your intestines.

There are two high level ways this production of ATP ends up being accomplished. In the first, using large supplies of oxygen. In this case, as much as 38 ATP molecules can be produced for every glucose molecule. In the second case, via anaerobic glycolysis- not requiring oxygen- only 2 molecules of ATP are produced for each molecule of glucose.  While an extremely inefficient use of the available supply of glucose, this method at least produces the ATP over two times faster than aerobic respiration and continues working for a time while you’re out of breath.

Due to glycolysis resulting in the accumulation of lactic acid in the muscles, ultimately if it accumulates faster than it can be gotten rid of, it will interfere with the anaerobic glycolysis process and your muscles are going to go all jelly and cease to work as well for a little bit. This is in part why, if you get out of breath when exercising and your body is relying more on anaerobic glycolysis, you get fatigued extremely quickly. In this case, you’re simultaneously creating lactic acid at a much more rapid rate and using up your available glucose molecules faster, but producing relatively small amounts of ATP for those molecules used. Do this for more than a minute or two and it will overtax your skeletal muscles’ ability to produce the needed ATP at the rate you’re using it. (Though, again, your mileage will vary based on your current fitness level.)

Back it off and so you’re relying mostly on aerobic respiration and you’re going to get the most bang for your buck, able to keep going all night long if you keep hydrated and well fed. Slow and steady wins the race.

Unsurprisingly from all of this, the more mitochondria there are, the faster ATP can potentially be produced if the needed molecules are present and the more the muscle can keep on keeping on. As for skeletal muscle, about 2%-8% of the volume of such muscle is mitochondria, though this varies somewhat from person to person depending on your level of physical fitness.

Moving on to smooth muscle, as you may have gleaned from the name, this is smooth with no striations.  Found in your hollow internal organs (except the heart), smooth muscles work automatically, helping you digest food, dilate your pupils and take a wee-wee. As an example of smooth muscle in action, in digestion, the contractions themselves are really not too dissimilar to how your heart beat works– fluctuation of electrical potential in the smooth muscle cells which causes the muscle to contract in a rhythmic fashion, in this case called the “Basic Electrical Rhythm” or BER.  This rhythm is about three times per minute in the stomach, and 12 times per minute in the small intestines.  The sound you are hearing when your stomach and intestines make noise is the result of these muscular contractions mixing and moving chyme (the cocktail of digestive juices, food, microbes, etc.) and air along down the tube between your mouth and your waste disposal port.

As for the mitochondrial needs of these muscles, they are typically approximately that of your skeletal muscles, with mitochondria making up about 3-5% of the smooth muscle volume.

It should also be noted that individual muscle cells in the heart actually do get regular rest thanks to how the heart beat actually works, which we’ll get into in the Bonus Fact in a bit. But the net result is that about 60%-70% of your life a given part of your heart is actually in a resting state.

Combining these micro-rests with the extreme amount of mitochondria and a large amount of oxygen from the heart’s awesome blood supply, this allows your heart all the ATP it needs to not get tired, assuming you’re not in an extreme state of starvation or doing some extreme form of exercise for extended periods well beyond your normal fitness regime.

On that note, the downside to needing so much ATP thanks to no extended downtime is that the heart really needs to rely on aerobic respiration to make sure it doesn’t run out of ATP, and thus it doesn’t take oxygen being cut off for too long from it before you’re going to have a bad time, unlike other muscles you can just stop using to help recover the needed ATP over time.

And, yes, it turns out the human heart can actually get tired and suffer damage if you’re trying to do some extreme form of physical activity outside your norm for lengthy periods, especially if in a low oxygen environment like at high altitude. In these cases, even the healthiest hearts can suffer damage, though given the other effects on your body of such extreme physical activity, typically most people will stop doing whatever before the heart is negatively impacted in a damaging way. In essence, your legs will give out before your heart does (usually), at least when talking energy supply. But that doesn’t mean in certain cases a measurable level of tiredness in the heart can’t be observed.

For example, in 2001, cardiologists studied a few dozen endurance athletes competing in a 400 km race in Scotland, which comprised of all manner of physical activities from paddling, rope climbing, running, biking, climbing, etc. and the whole event taking almost 100 hours. During this span, the athletes typically only slept about 1 hour per 24 hours during the event and otherwise soldiered on.

The results? At the end of the race, the athletes’ hearts were only pumping about 90% of the volume per beat they’d been managing before the race started.

Showing the resilience of the heart and its mitochondrial baddasery, Cardiologist Euan Ashely, who was involved in the study, stated that “the athletes’ hearts that showed signs of cardiac fatigue did return to normal fairly quickly after the race and no permanent damage was done.”

That said, further research on endurance athletes calls into question the notion of “no permanent damage” being done. For example, researchers involved in a 2011 British study looking at British Olympians who competed in distance running and rowing (and specifically competing in at minimum a hundred events), found that as they aged they showed marked signs of heart muscle scarring, something that can lead to irregular heart function and, potentially, heart failure.

Of course, these are extreme examples, and for most people not doing ultra marathons regularly or competing professionally or semi-professionally in endurance events, this is unlikely to be a problem and the holistic health benefits of regular, vigorous exercise are likely to make up for it even then. So stop reading, go subscribe to our BrainFood Show podcast where we talk about stuff like this all the time in audio form, and while listening go for a walk or pick up something heavy and then put it back down again and repeat. The benefits to your life are astounding, positively effecting just about every facet of your life and typically making it a lot longer and more enjoyable too. Your future or present grandkids are worth getting to know, right? 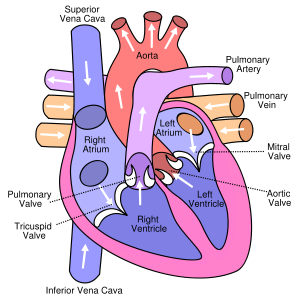 Ever wonder how the heart beat works? Well, wonder no more. In a nutshell, the heart is a four chambered pump.  The top two chambers are called Atria, the bottom two are called Ventricles.  They are separated from top to bottom by valves; the right and left sides are separated by a septum.  So what makes the pump squeeze?  When the hearts muscle gets “shocked”, it will contract and force the blood down its path, with the valves not allowing blood to flow back through the system, unless they are defective.

So what causes that infamous electric shock the heart receives approximately 60-100 times a minute?  Short answer: Dormammu.  Long answer: The exchange of electrolytes across specialized cells within the heart build up a differing electrical potential on either side of the cell.  When this electrical potential reaches a certain level, it discharges and sends a shock down another unique set of cells within the heart, causing a shock and thus the contraction.

When the SA node sends out and electrical shock, it immediately shocks the atria.  The pulse then gets “held up” in another set of cells called the Atrioventricular node, or AV node for short.  This then transmits the impulse down to the bundle of His and then to two pathways called the right and left bundle branches.  Then it’s transmitted to the rest of the Ventricles through what are called Purkinje fibers.  All together this “shock” causes the atria to contract, then the ventricles.  You’re still alive! (For now.)

So what and how do these electrolytes cause this shock?  In an attempt not to give a physiology lecture of ungodly proportion, we will simply say that the main two electrolytes involved are sodium and potassium.  Potassium normally sits inside the cell, and sodium outside.  Potassium slowly leaks outside of the cell and sodium then goes inside the cell.  This creates the differing electrical potential that builds up until the point of discharge.  Other electrolytes also help in creating this differential, and they are calcium and magnesium.  All together the harmony created by this yin and yang system of electrical and mechanical systems come together to make that wonderfully thumping thing inside your chest!