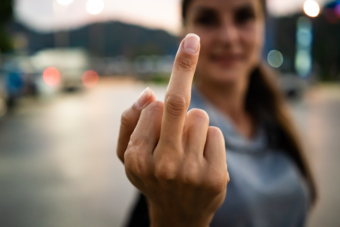 While some common gestures, such as the high five, have pretty well known and surprisingly modern origins, it turns out one of the most popular of all has been around for well over two thousand years, including having various similar connotations as it has today.

Unsurprisingly once you stop and think about versions of the expression’s meaning, extending the middle finger simply represents the phallus, with it perhaps natural enough that our forebears chose their longest finger to symbolically represent man’s favorite digit. (Although, there are some cultures that instead chose the thumb, seemingly preferring to have their girth, rather than length, represented here…) It’s also been speculated that perhaps people noticed that the curled fingers (or balled fist in the case of the thumb) made for a good representation of the testicles.

Either way, given the symbolism here, it’s no surprise that the expression has more or less always seemed to have meant something akin to “F&*k You” in some form or other, sometimes literally.

For example, in Ancient Greece, beyond being a general insult, in some cases there seems to be a specific implication from the insult that the person the gesture was directed at liked to take it up the bum. In the case of men, despite male on male lovin’ being widely accepted in the culture at the time, there were still potentially negative connotations with regards to one’s manliness when functioning as the bottom in such a rendezvous, particularly the bottom for someone with lower social standing.

Moving on to an early specific example we have Aristphanes’ 423 BC The Clouds. In it, a character known as Strepsiades, tired of Socrates’ pontificating, decides to flip off the famed philosopher.

SOCRATES: Well, to begin with,
they’ll make you elegant in company—
and you’ll recognize the different rhythms,
the enoplian and the dactylic,
which is like a digit.

STREPSIADES: Like a digit!
By god, that’s something I do know!

SOCRATES: Then tell me.

STREPSIADES: When I was a lad a digit meant this!

[Strepsiades sticks his middle finger straight up under Socrates’ nose]

For whatever it’s worth, in the third century AD Lives of the Eminent Philosophers, we also have this reference of a supposed incidence that occurred in the 4th century BC, concerning famed orator Demosthenes and philosopher Diogenes.

[Diogenes] once found Demosthenes the orator lunching at an inn, and, when he retired within, Diogenes said, “All the more you will be inside the tavern.” When some strangers expressed a wish to see Demosthenes, [Diogenes] stretched out his middle finger and said, “There goes the demagogue of Athens.”

(No doubt water was needed to put out the fire created by that wicked burn.)

Moving on to the first century AD, Caligula seems to have enjoyed making powerful people kiss his ring while he extended his middle finger at them. On a no doubt completely unrelated note, the chief organizer of his assassination, and first to stab him, was one Cassius Chaerea who Caligula liked to do this very thing with, as noted by Suetonius:

Gaius used to taunt him, a man already well on in years, with voluptuousness and effeminacy by every form of insult. When he asked for the watchword Gaius would give him “Priapus” or “Venus,” and when Chaerea had occasion to thank him for anything, he would hold out his hand to kiss, forming and moving it in an obscene fashion.

Speaking of the implications of this insulting gesture, it seems to have fallen out of favor during the Middle Ages with the rise of Christianity, or at least records of it diminish. This may mean people actually stopped popularly flipping the bird or may just mean its uncouth nature saw it something not generally written about. That said, we do know thanks to the Etymologiae of Isidore of Seville that at least as late as the 6th century people were still extending the finger as an insult, in this reference particularly directed at someone who had done something considered “shameful”. 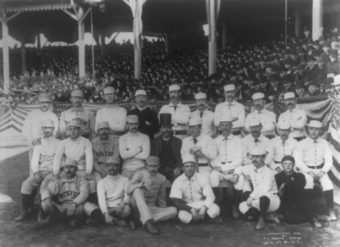 Moving on to more modern times, the gesture was popularly resurrected in documented history starting around the early 19th century, with early photographic evidence later popping up in the latter half of the 1800s. Most famously, we have a photograph of the gesture flashed by present day Twitter sensation and former 19th century baseball iron man Charley “Old Hoss” Radbourn. Radbourn was a pitcher for the Boston Beaneaters in 1886 when the team, along with the New York Giants, posed for a group photo. In the photo, Old Hoss can be seen giving the bird to the cameraman. (We’ll have more on Charley “Hoss” and his possible connection to a different expression in a bit.)

At this point you might be wondering why we call extending the middle finger today- “flipping the bird” or “giving the bird”. The connection is speculated to derive from the centuries old practice of more or less making bird sounds, particularly owl and geese calls, as an equivalent to booing when an audience is dissatisfied by something. This, in turn, gave rise to the popular 19th century expression to “goose” someone and then a little later led to the expression “give the big bird”, as noted in William Earnest Henley’s late 19th century work, Slang and Its Analogues Past and Present:

Big Bird: To get or give the big bird- To be hissed on the stage…. When an actor or actress gets the big bird, it may be from two causes; either it is a compliment for successful portrayal of villainy, in which case the Gods simply express their abhorrence of the character and not of the actor; or, the hissing may be directed against the actor, personally for some reason or other. The Big Bird is the goose.

By the mid-20th century, this seems to have extended to “giving the bird” not just referring to insulting sounds, but to describe extending the middle finger as well. One of the earliest examples of this can be found in the 1942 animated film A Tale of Two Kitties. In it, the pair of cats attempt to capture Tweety bird. At a certain point, one of the cats implores the other “Give me the bird!”  The other cat then turns to the viewers and exclaims “If the Hays Office would only let me, I’d give him the bird alright.”