April 21, 2019 Karl Smallwood
Jen K. asks: Odd question, but what does being shot feel like? 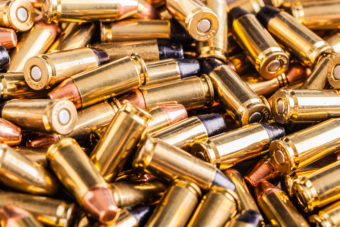 While there are certainly exceptions, as we’ll get into shortly, according to the majority of firsthand accounts from people who’ve been shot we could find, having a hunk of searing hot metal traveling around Mach 1 tear through part of your body doesn’t really hurt much… at first. For example, consider this account from one Deborah Cotton who was struck by a bullet during a Mother’s Day parade in 2013-  “When the bullet hit me, surprisingly it didn’t hurt at all. Not one bit, which shocked me. I remember thinking, ‘That felt like someone just chucked a small pebble at me.’”

In Deborah’s case, the bullet hit her in the side around her hip and traveled up, finally stopping around her rib cage on her left side.  She went on to have 36 surgeries, losing her colon, gallbladder, one kidney, part of her pancreas, two-thirds of her stomach, and the duodenum, which, we’re not going to lie, we had to look up.  Turns out that’s the initial bit of small intestine directly connected to the stomach. **The More You Know**

Interestingly, despite the severe damage to her body, which nearly cost her her life later at the hospital, she states,

After about 90 seconds passed, I realized, ‘Hmm… I may not be dying after all. I wonder if… God forbid, am I paralyzed?’ I wiggled my toes, then my ankles; it was all good. So I wasn’t dying, and I wasn’t paralyzed… There still was no sharp or shooting pain, nothing like what you think you’ll feel when a metal object rips through your body… I was later told that the 9mm used in the shooting accounted for the lack of initial pain: The bullets were the kind that stay intact, rather than the kind that explode into flesh-tearing shrapnel.

If you suspect Deborah Cotton might just be a bit of a badass to shrug off having her insides eviscerated, consider this account from one Ryan Jarcy, a guy who was attempting to dial 911 to report he’d just been robbed only to have his shotgun slip from his hand as he was dialing the number. When he reflexively attempted to grab it, he accidentally pulled the trigger, shooting himself in the leg, more or less making it look like, to quote him, “a pile of Alpo dog food smushed up against what used to be just below my knee”. He goes on:

My brain didn’t actually register what had happened until a few seconds later. My shin bone was sticking out about 2 to 3 inches from the ragged end of my stump, but I felt nothing, nor did I notice it… I attempted to stand, and then felt it. I yelped in pain, fell flat on my face, and made the foolish decision to try standing up once more. The entire weight of my body was now on that bone. And that bone, weakened by 96 tiny lead pellets traveling at twice the speed of sound, didn’t hold up very long. It snapped like a piece of blood-soaked chalk, jamming the shards into my newly opened calf muscle and feeling, oh, let’s go with “uncomfortable”.

(Incidentally, to add insult to life threatening injury, Mr. Jarcy notes that all of this occurred a mere 12 hours after he’d been removed from his parent’s health insurance coverage and he had not gotten any of his own yet, with the whole thing, including amputation of his leg, costing him a little over $60,000.)

So, for many, there is little pain at first. But what about other sensations? While various people report everything from a bee-sting sensation to getting hit with a baseball bat, minus the pain, one nearly universal report is of extreme and persistent burning sensation in the initial aftermath, as redditor Tia_Jamon states:

I’m not one of those, ‘I didn’t even realize I was shot’ people, though I can definitely understand where they’re coming from. The very first thing I felt can only be described as a sudden impact of no sensation. I felt numbness wash over the area. If I had not realized I was about to be shot shortly before I was, I could see how I could have easily have been too distracted to notice this immediate response. That feeling then gave way to a horrible burning sensation. It’s a very ‘hot’ pain. It feels the way a very flushed face or a blister feels, but intense and painful.”

Going back to Deborah Cotton she corroborates this, stating, “As I continued to take inventory of my body and soul, that burning sensation in my stomach where the bullet traveled began to take over my focus.”

Yet another account relates, “It’s a bit of [a] burning sensation mainly… Best way I can describe it is that it feels like being continuously poked as if someone is holding multiple sharp pricks to you and pushing in, but not stabbing. ”

From there the similarities in accounts of what it’s like to get shot vary much more significantly, depending on location of injury.  For some, pain comes quickly after the initial shock wears of, sometimes extremely quickly. For example, in the case of a lawyer who got shot in the knee, he reported almost no blood, but “for me at least, the ‘it doesn’t hurt because of the shock’ part lasted about 2 seconds. Then, immense pain that I can’t even begin to compare to anything else. By the time I got some morphine, I was drenched in sweat and writhing uncontrollably from the pain, and I normally have a high pain tolerance.”

Others simply report waves of general achenes growing to an extreme level, while in a minority of cases, some don’t note much of any real pain after.  As one man shot in the calf by a .22 jokes, “Honestly, it didn’t hurt that bad. Hopefully, being shot by a smaller caliber has helped me build my immunity up towards larger bullets.”

One side note here is what getting shot in the head feels like.  It turns out plenty of people actually survive this type of wound, with those who are still quite cognoscente of the incident universally reporting extreme headache like symptoms. For example, one Michael Moylan actually didn’t even know he’d been shot.  Turns out his wife had “accidentally” shot him in the head while he slept…

The result was simply him waking up and noting he had a severe headache and asking his wife, April, to drive him to the hospital, which she did. It was only after a nurse looked him over that she informed him he’d been shot in the head, at which point April bolted…

What’s more interesting than the headache symptoms, though, is something else universally reported in the handful of accounts of head shot survivors we reviewed. They all report an accompanying ringing. As Gary Melius, who was shot in the head and also likewise didn’t realize what had happened until at the hospital, states “there was a ringing inside of my head. It was a noise that I’ll never forget. Never heard it before, and never heard it since. It was like being in a can, I guess. Just so loud.”

Joab Hodge further states of his experience getting shot in the head, “their is this very loud buzzing, almost a sort of ringing type sound as to when it happens. Surprisingly it is very loud, like two bees inside of your ears, but sounds more like how your ears would normally ring, just uncomfortably loud. The initial ‘ping’ as I call it, can be heard before the ringing commences, like someone hitting metal on metal, but it’s high-pitched. After that, very loud and scary ringing commences, but no pain is registered at that moment.”

As for the long term aftermath of getting shot in general, this varies considerably, again based on the extent and location of the damage, though victims often reported the recovery and rehab is worse than the initial pain of getting shot. Going back to the case of the aforementioned lawyer shot in the knee, he states, “What the movies seem to miss most though is the long term recovery. It was months of continuous pain afterward. Oxy barely took the edge off.”

More than potential long term chronic pain and the like, perhaps unsurprisingly for people who endured such physical trauma and in many cases near loss of life, the psychological side of being shot is also occasionally noted as being something else that makes the whole experience awful.  As stated by Deborah Cotton,

The impact of the shooting on my mental health, though, showed up in surprising ways. I endured bouts of PTSD during the first few months after the shooting. Once home, I began counseling sessions with two psychologists, both PTSD experts. For a while, I was terrified of being in a car going over 35mph, and I’m not exactly sure why, since driving doesn’t seem to have anything in common with guns…but eventually the fear faded away.

So there you have it, while specific accounts of what it’s like to be shot vary wildly, in the general case it would seem you can expect little in the way of initial pain, or even much sense that you may have just been mortally wounded, followed by an onset of extreme burning, followed by some measure of general pain, followed by chronic pain throughout recovery and maybe beyond, and potentially a little side of psychological trauma just for fun. That is, if you simply don’t die in the first place.  Good times…