May 2, 2017 Melissa
Jonathon M. asks: Is it true that the Chinese government owns every panda in the world? 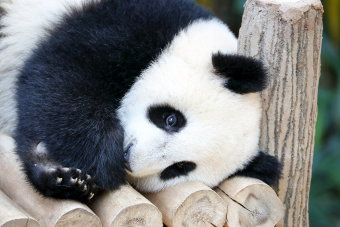 Whether in D.C., London, Adelaide or Madrid, nearly all giant pandas in today’s zoos are technically there on a 5 or 10-year loan from China, and at a substantial price.

It hasn’t always been this way, though. Beginning in the late 1950s and through the early 1980s, the People’s Republic of China used the gift of a giant panda as a means of diplomacy; during those three decades, they gave over 23 pandas to nine countries including Great Britain, Japan, Spain, United States and Mexico.

Most of these gifted pandas have perished (in captivity, giant pandas have an approximate 30 year lifespan compared to about 20 years in the wild), although at Mexico City’s Chapultpec Zoo, two “grandfathered” pandas who are offspring of former gifted parents, Shaun Shuan and Xin Xin, remain. However, other than these two, it is difficult to find a giant panda that doesn’t belong to China.

Why? In the early 1980s, China changed its policy and decided to make a little money off of this one-of-kind creature that, up until recently, was really difficult to breed in captivity. Accordingly, today China charges around $500,000 to $1,000,000 per year for the loan of a giant panda, with, at least in the case of the United States rentals since 2011, a considerable amount of that money required to go to giant panda conservation efforts.

As for the offspring of rented pandas, according to the terms of the loans, any cubs born to rented-out giant pandas are China’s property and must be returned to the country after roughly two years; in addition, if a cub dies while on loan and it is deemed to be because of human error, a penalty in the hundreds of thousands of dollars range may also be assessed.

The Chinese government also requires a life insurance policy be taken out on each panda loaned out. In the United States, the contracted life insurance policy must be $1 million, set to be paid to the Chinese government should the panda die. In addition, according to the current U.S. contract, if the death is deemed to be from improper care or otherwise caretaker error, an additional $800,000 must be paid to China.

Beyond the cost of acquiring them, giant pandas are also expensive for zoos to maintain, as they require special housing and, of course, enormous amounts of fresh bamboo – with an adult eating up to 40 pounds of the fibrous plant each day. (Note: if the bamboo isn’t fresh enough, the pandas simply won’t eat it, requiring that it either be grown nearby or imported regularly.)

For reference on the total costs here, in the last two decades the San Diego Zoo claims, after all associated costs have been tallied, they’ve spent over $40 million on their giant panda exhibit. However, the president of Zoo Advisors, David Walsh, notes that “Yes, they are expensive to maintain and exhibit, but they are a tremendous draw. It does make economic sense, if you have the right market.”

For example, in the year 2000, the first year the Atlanta zoo had giant pandas, it broke attendance records, and after its first cub, Mei Lan, was born in 2007, it saw another attendance surge of 25%.