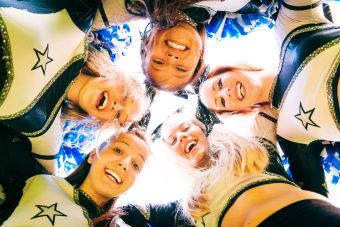 While people have been cheering in one form or another at sporting events  seemingly as long as there have been organized sporting events (for instance, see: The Truth About Gladiators and the Thumbs Up), what we’ve come to know as the “American phenomenon of organized cheerleading” dates back to the 19th century, with its genesis coinciding with the rise of collegiate athletics.  At this time, only an estimated two percent of the country’s population went to college and, of that small number, nearly all were wealthy, male, and white. Among these individuals’ favorite extracurricular activities were intramural sports, particularly crew, baseball, track and field, and football. However, just like today, not everyone was meant to be a sports star and players occasionally got injured. For those students who couldn’t be on the field but still held school spirit, they were encouraged to support their teams by cheering.

This all brings us to November 6, 1869 when the first official intercollegiate American football game was held between Princeton and Rutgers. It was this game that is generally credited as kicking off the modern, organized sports cheering. Called the Princeton Locomotive and based on the calls made by the New York 7th Regiment when it had passed through Princeton during the Civil War, the specific thing the crowd chanted during the game was a strange mix of sing-song phrasings and nonsense words:

While Princeton would lose that day to Rutgers by the score of six to four, the “Princeton Locomotive” is a cheer that’s still used today.

By the late nineteenth century, many colleges began sanctioning cheerleading (and sports) as official school activities. Photos from this period show male volunteers, often dressed in suits and derby hats, standing before spectators at football games and leading them in cheers.

It was also at this time when colleges began honoring spirited students with titles like “Rooter king,” “Yell Leaders,” “Yell Kings,” “Yell Masters,” or “Yell Marshals”- all names for the head cheerleader. One such notable head cheerleader was Thomas Peebles, who led Princeton’s all-male pep club founded in the 1880s. Peebles would eventually move to Minnesota after graduating and introduced organized cheerleading to the university there, helping to spread the practice.

Perhaps the most famous “yell marshal” from this era actually attended the University of Minnesota- one Johnny Campbell, who is often incorrectly given credit as being the first organized cheerleader. The legend goes that in 1898, the Golden Gophers were on a pretty miserable losing streak. To top it off, the school newspaper had placed blame for the team’s losing on the students and faculty not knowing how to cheer correctly. It was during a game against rival Northwestern on a brisk November day when Campbell, who was a medical student at the time, decided he had enough of both the losing and the lack of school spirit. Picking up a megaphone and a cowbell, he led the spectators in cheers like:

Whether all the details of that commonly told story are correct or not, with the crowd behind them, Minnesota did indeed end their losing ways, defeating Northwestern by the score of 19 to 6; Campbell would go on to be an honorary cheerleader for forty years at his alma mater, always with a megaphone and cowbell in hand.

By the early 20th century, cheerleading was found on nearly every major college campus. However, not everyone was thrilled with the activity. In 1911, Harvard President A. Lawrence Lowell, who deplored cheerleading, described the cheerleaders’ cheers as “the worst means of expressing emotion ever invented.”

The Nation (a magazine that’s still around today) disagreed, throwing their support behind cheerleaders and the boisterous chants they came up with, noting “the reputation of having been a valiant cheer-leader is one of the most valuable things a boy can take away from college… it ranks hardly second to that of having been a quarterback.”

According to Mary Ellen Hanson, author of, Go! Fight! Win!: Cheerleading in American Culture, the idea here was that, much like being a quarterback, cheerleading instilled the “symbols of undergraduate leadership which would translate into professional success in adult life.”

And, indeed, the list of male notables who were cheerleaders is astonishing. Just to name a few- FDR would later proudly tell stories from his cheerleading days at Harvard. After hurting his knee to the point he could never play football again, future general and president Dwight D. Eisenhower joined the cheerleading squad at Army. George W. Bush, George H.W. Bush, and Ronald Reagan were also cheerleaders. Beyond presidents, Michael Douglas, Jimmy Stewart and Samuel L. Jackson led their schools in showing spirit.

The idea that there was great value in the skill of cheerleading even led to Stanford adding it to its curriculum in 1924. In the class, students were taught, as noted by the New York Times, “Bleacher Psychology, Correct Use of the Voice, and Development of Stage Presence.”

So how did we go from all male cheerleaders to the scantily clad girls with pom-poms we have today?

As previously mentioned, for many years college was primarily attended by males from wealthy families. However, by the 1920s, more and more universities were admitting women, too. Despite this, cheer squads were still a male-dominated thing, as cheerleading, funny enough from a modern perspective, was considered a very masculine activity.

However, the widespread introduction of women to college also saw many of these ladies wanting to do their part in supporting their teams. Thus, by the late 1920s, women who wanted to help get the crowds going became “song girls.” They were restricted to this role primarily because cheerleading was thought to be too athletic of an endeavor for women and their “fragile” bodies to be able to take. (Incidentally, for the exact same reason a girl who struck out Babe Ruth and Lou Gehrig back to back on just six pitches was banned from Major and Minor League baseball, despite previously demonstrating her durability and considerable skill. This is also despite the fact that Lizzy, The Queen of Baseball, Murphy had already thoroughly debunked the idea that women were too fragile to take part in male athletic activities, with Lizzy becoming the first person, man or woman, to play for both of Major League Baseball’s American and National League All-Star Teams during her long and truly illustrious baseball career.)

Yelling was also out for the ladies because it was generally thought that a woman’s voice was too delicate to handle such an activity for an extended period… Instead, the song girls delighted the crowds by looking pretty while singing with the band.

However, by the late 1930s, some song girls had managed to transition to helping more directly in cheerleading- a shift that was met with great resistance.  For instance, in 1938, one J.J. Gach in his article, The Case for and against School Cheerleaders, noted the negative effect, in his view, the “masculine” activity of cheerleading had on women:

[Women cheerleaders] frequently became too masculine for their own good… we find the development of loud, raucous voices… and the consequent development of slang and profanity by their necessary association with [male] squad members…

This brings us to World War II. Up until this point, males continued to dominate cheerleading and were always the captains, even if a woman did manage to join the ranks. However, thanks to males by the thousands going off to war, women were given the opportunity to take over cheer squads, among many other roles that had traditionally gone to men.

When the men returned from war, while some universities saw them also return to leading cheers (indeed some colleges even resorted to banning women from cheerleading again), the tide had nonetheless begun to turn. With the ever increasing number of women involved in this sideline sport and the increasing emphasis given to the female form in the activity, not just cheering, within two decades, cheerleading was predominantly seen as a feminine, rather than masculine, enterprise. This switch also coincided with cheerleading and the cheerleaders themselves becoming somewhat marginalized in their perceived importance to the team’s success. As these two things happened, males exited the scene in droves. This is a trend that has more or less continued through today. In fact, according to USA Today, there are around three million cheerleaders in America, but only about five percent of them are males.