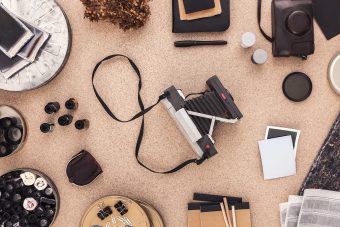 For anyone unfamiliar with the 2003 hip-hop hit, Hey Ya! by OutKast, the line “shake it like a Polaroid picture” is repeated over a dozen times. The accompanying music video released alongside the single saw the line punctuated by a bunch of attractive women shaking recently taken Polaroid photos, along with their various wobbly bits, with dangerous levels of enthusiasm.

Ultimately the song went on to become one of the most critically acclaimed and commercially successful of the entire year, including becoming the first song ever to pass one million paid downloads, all making OutKast a household name and revitalizing interest in what was, at the time, a largely forgotten, or at least antiquated, product in the digital age. Unsurprisingly, executives at Polaroid were initially quite pleased with the mention, noting in a press release written by spokesman Skip Colcord, “We’re very thankful for the different brand exposure the song has given us.”

Wanting to capitalize on the success of the song, Polaroid got in contact with OutKast and quietly bankrolled a number of parties to be headlined by the group. Polaroid deliberately avoided overtly advertising during the events, instead simply hiring people to hand out new Polaroid cameras to the celebrity guests in attendance. As Polaroid expected, the celebrities took pictures with the cameras and dutifully shook them during the song’s chorus, making the brand seem just all kinds of cool with the ever impressionable public.

Polaroid also gave the group new instant cameras that they took on stage during events, notably the Grammy’s and an appearance on Saturday Night Live. With people once again interested in Polaroid instant cameras, there was just one more thing the company had to do- ask them to not do the one thing everyone associated with their most popular product.

You see, shaking Polaroids is a great way to increase the odds of the photo you just took getting ruined, though most of the time this fanning will do nothing at all. As explained on a now defunct version of the official Polaroid website: “The image develops and dries behind a clear plastic window and never touches the air, so shaking or waving has no effect.”

In a nutshell, the image is sandwiched between layers of plastic, so shaking the photo after it is printed and still developing can actually damage it, causing small blobs or blotches to appear. For anyone wondering exactly what you’re supposed to do with a freshly ejected Polaroid picture, according to the people that make them: “The best way to ensure a perfectly developed image is to simply lay the picture on a flat surface immediately after it exits the camera.”

Given this, you might now be wondering why it has long been a common practice to wave Polaroids back and forth in the air directly after you take a picture- something that no doubt ultimately inspired the lyric by OutKast.

This practice has its genesis in the early models of Polaroid cameras, particularly those that used packfilm, otherwise known peel-apart film, where you had to physically peel apart the positive and the negative after the photo had developed. Polaroid themselves notes, “Peel-apart versions of the film needed to dry before it could be handled, so waving the photo helped it to dry more quickly”. Given the design here, waving with peel-apart film didn’t risk blotching as with subsequent generations of instant film developed by Polaroid. That said, it should be noted that such waving wasn’t actually necessary even then. One could just leave the photo to dry naturally.

However, in the 1970s, Polaroid introduced their third generation of cameras, such as the SX-70, among others, that used a new, and now iconic, square format integral film where shaking, or really doing anything at all but waiting for the picture to finish developing, was entirely unnecessary- everything was contained in the film, with no need to peel or dry anything.

Despite this, even after Polaroid improved their instant development process, people continued to shake the Polaroid pictures back and forth in the air until the picture finished developing, seemingly blissfully unaware that this is entirely unnecessary, and even potentially counterproductive to the ultimate successful development.