January 31, 2017 Karl Smallwood
Helen W. asks: Is it possible for a fish to get thirsty or do they always get the water they need automatically? 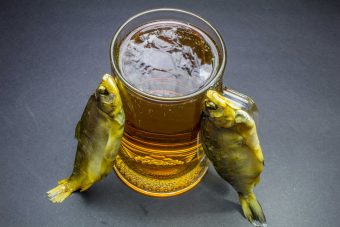 For fish, or at least teleost fish (which make up about 96% of all fish), the desire to drink is an urge that originates from the hindbrain, whereas in land-based animals it originates in the forebrain. It is generally thought from this that a fish has no real ability to consciously feel thirst as we or many other land-animals would understand it; for them, it’s just a natural reflex. So the short answer to whether fish ever get thirsty is thought to be “no”, at least not on a conscious level. However, fish do need to take in water, but, as with land animals, too much water can kill, a particular problem when one is surrounded by it! Unsurprisingly, the processes by which this is regulated in fish is quite fascinating, and further answers the question of why most fish must stay in either a saltwater or freshwater environment exclusively.

To begin with, we’ll start with how exactly fish drink. Like any other animal, fish need to maintain a strict balance of water and salt (among other minerals) in their system to remain alive and flipping along. As they’re constantly surrounded by water, the main issue for fish isn’t concerning getting enough water in their bodies, but regulating concentration of certain minerals, of particular importance being things like salt and potassium.

For freshwater fish, their blood has a higher concentration of salt than their surroundings (hypertonic), which is a major problem. While their skin is mostly impermeable (though not completely), as their gills are in constant contact with the surrounding water, which is essential for them to breathe, water is continually taken into the fish’ bloodstream via osmosis, with osmotic pressure being the key driver here.

For example, if you take a red blood cell and place it in distilled water, thanks to osmotic pressure and the fact that the cell membrane is thin and semipermeable, the cell with its relatively salty interior next to the pure water will gradually absorb more and more water until it explodes. On the flipside, if you place that same red blood cell in water that is saltier than the cell’s interior liquid, the reverse will happen and the cell will gradually lose water, shriveling up in the process. Place it in water that has the same solute level as the cell, and nothing at all will happen. (Certain sea-life, such as most marine invertebrates, actually are more or less always in this state- maintaining the same solute concentration internally as the seawater they live in (osmoconformers)). 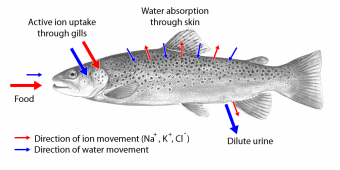 Thus, to regulate the large amount of water entering its bloodstream diluting the concentration of dissolved minerals, such as the ever important salt, freshwater fish must urinate incredibly often. (This is one of the reasons it’s advised to clean a goldfish bowl regularly or install a filter. And, note, contrary to popular practice, you should never, ever leave a goldfish in a small, simple fish bowl for a variety of reasons, see our video on the matter for more information). Towards this end, freshwater fish have large kidneys with a relatively expansive network of capillaries, called the glomerulus, facilitating faster urine production.

This helps, but the fresh water fish also need to take in relatively significant amounts of salt to further aid in keeping their levels high enough. They are able to do this thanks to special chloride secretory cells in their gills which will actively draw salt from the surrounding water and release it into the bloodstream, at the same time osmotic pressure is drawing more and more water into their system, diluting the blood. 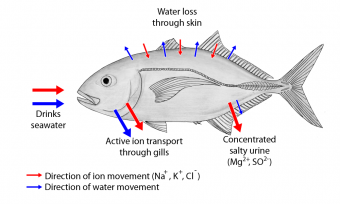 The problem for saltwater fish is more or less the exact opposite as freshwater fish, and it should come as no surprise then that their drinking and urinating habits likewise go the other way. The saltwater fish have less salt in their blood than the surrounding water (hypotonic). So rather than absorbing water as it passes through their gills, saltwater fish lose a lot of water from their blood as they breathe via the same osmotic pressure as mentioned with the freshwater fish. As a result, they must drink considerable amounts of water through their mouths. However, again, because the part of the brain that controls this is in the hindbrain, it’s generally thought this regular swallowing of water is a reflex action performed without a conscious thirst sensation.

Saltwater fish also don’t urinate much at all, in order to conserve water. Towards this end, they have very few, small capillary networks making up their glomerulus, unlike freshwater fish.

However, the water the saltwater fish are drinking has an awful lot of salt in it- much more than they need. To get around this, the chloride secretory cells of saltwater fish, rather than absorbing salt from the surrounding water as with freshwater fish, actively release it from the fish’s body into the environment.  This all combines to more or less automatically keep the saltwater fish’s salt levels in the optimal range.

As for fish that can migrate back and forth from fresh water to seawater, their bodies are capable of regulating both ways, but they typically require an acclimation period between the two.  For instance, salmon start their lives in freshwater, and as they begin to transition to saltwater they’ll naturally start drinking more and more water, while their urine production begins to rapidly drop. At the same time, a special enzyme results in a reversal of the previous function of their chloride secretory cells in their gills- instead of absorbing salt from the environment, the “pump” reverses, excreting it.  Once their bodies have fully transitioned (generally after a few days hanging out in the intertidal zone), they are free to safely venture out into the big blue. The same thing happens again in reverse when they return to fresh water to spawn, spending a few days acclimating in between until the system has naturally switched and they can safely head up stream.