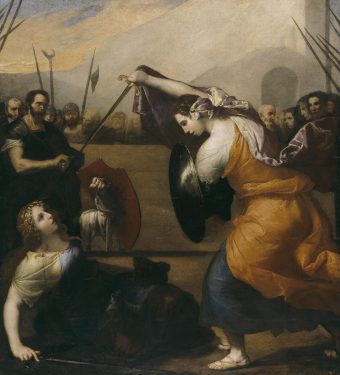 A time-honored method of settling disputes, trial by combat became an institution in Europe during the Middle Ages. Although it fell out of fashion for many, beginning with the Enlightenment, it remained a popular means for European nobility to settle matters of honor well into the 19th century.

While most duels were fought by men, occasionally a ladies’ disagreement would get out-of-hand, and the resulting “petticoat duel” would commence.

One of the earliest of these recorded was between Diambra de Pettinella and Isabella de Carazzi in Naples in 1552, when the two couldn’t agree on which of them should win the heart of Fabio de Zeresola. While the outcome remains unknown, the battle between them was memorialized in the painting of Jose de Ribera, Duela de Mujeres (1636).

Over the years, lady duels were fought between actresses challenging each other’s craft, society mavens over who should take precedence at an event, and two ladies,  Madame Astie de Valsayre and “Miss Shelby”, even clashed over whether American or French doctors were superior. As noted in an article published in Le Petit Parisien on March 17, 1886,

Mme Astié de Valsayre, known for having published several books, has just been to Waterloo for a fencing duel with an American, Miss Shelby. During a debate on the superiority of French female doctors over American female doctors she had thrown her glove in the face of Miss Shelby. France was victorious. During the second engagement the American was lightly wounded on the arm. Witnesses have stated that everything happened according to the rules.

Fighting just until someone drew blood (as opposed to the death or to the pain) was common with lady duels. For instance, in 1792, after one Mrs. Elphinstone insinuated Lady Almeria Braddock was significantly older than she was, the pair battled first with pistols and then with swords in London’s Hyde Park. The result? Their pistol shots missed, but the matter ended as soon as Lady Braddock inflicted Elphinstone with a light wound to the arm with her sword. After receiving the wound, Mrs. Elphinstone agreed to write a formal apology.

Perhaps the most famous “petticoat duel” of them all was fought topless. This likewise was supposed to be fought only to first blood, but, apparently, between the seriousness of the dispute and the ferocity of the combatants, both ladies were ultimately injured.

Deciding the dispute could only honorably be settled by armed combat, the women travelled to the Vaduz on the Swiss frontier to duel it out. Attended by their seconds, Princess Schwarzenberg and Countess Kinsk, as well as the medically-trained Baroness Lubinska, on the advice of the Baroness, the two duelists first stripped to the waist before the battle.

More than mere bravado, and certainly not for any salacious purpose, the Baroness had the ladies remove their clothing due to the possibility that small strips of cloth could be trapped in any sword wounds, and might thereby lead to the contraction of sepsis, something she’d seen happen before in the aftermath of duels. Caused by, in pertinent part, a bacterial infection of the bloodstream, the body’s immune response can sometimes ultimately damage organs or other tissues, and, in some cases, lead to organ failure and even death. 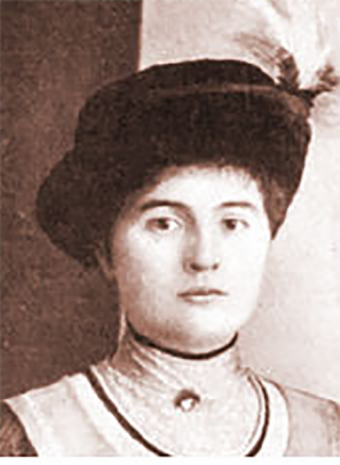 As the fight was to begin, the few males that were present (all servants) were sent to stand far away with their backs to the battle. The fight itself was reportedly relatively short.  Both ladies made a few thrusts and feints with their rapiers, resulting in princess Pauline cutting countess Anastasia’s nose.  With first blood drawn, and supposedly in some shock over having done so, the Princess dropped her defenses. Rather than cease fighting, the Countess subsequently stabbed the Princess in the arm.

At the sight of the blood, it is reported that both seconds fainted (see: Why Women Fainted So Much in the 19th Century), and hearing the ladies’ cries, the chivalrous (or curious) footmen and coachmen supposedly attempted to rush to their “aid.”

Since the Princess drew first blood, most considered her the winner, although some felt that the glancing blow wasn’t as worthy of recognition as the Countess inflicting a deeper arm cut. Regardless, at the urging of their two seconds, shortly after both were injured the duel ended and the ladies made up.