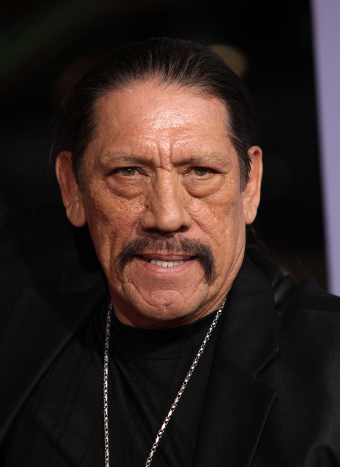 While Danny Trejo might not be a name as many people would recognise as say, Tom Cruise, with over 300 film credits to date since his acting debut in the mid-1980s, not to mention his distinctive hard-as-nails look, he’s certainly one of the more recongisable faces in Hollywood. Unlike most, however, Danny’s trail to becoming one of the hardest working actors in Hollywood began in prison while facing “three gas-chamber [worthy] offences”.

Throughout his earlier years, Trejo, a California native, spent time in most every major youth detention center and prison in the state including Folsom, Soledad and San Quentin, where Trejo became a celebrity of sorts thanks to his impressive boxing skills. According to Trejo, he was the light and welter weight boxing champion of just about every prison he spent time in.  Of course, he also noted after visiting his former cell in San Quentin during the filming of Champion, “It wasn’t frightening. It was like — you’re reliving a bad dream, and you’re no longer able to hide the fact that you were scared to death. OK, you tell yourself, I’m the baddest motherf***er here! You know? I climbed to the top! Well, you go back, and you’re no longer able to lie to yourself. I was on top, but I was on top of a pile of sh*t.”

The turning point in Trejo’s life came in 1968 when, on Cinco De Mayo of that year, Trejo and several of his cohorts decided to start a prison riot, as you do. During the ensuing chaos, among other crimes, Trejo seriously injured a guard when he hit him in the head with a rock. This is a crime he doesn’t dispute today, though he does claim that he was actually aiming for someone else and the guard just got in the way. After the incident, Trejo was put into solitary confinement, where he was convinced he was going to receive the death penalty given some of the charges that were being leveled against him. With an extremely lengthy rap-sheet already at that point, despite his young age (24 years old, committing his first armed robbery at 14), he fully expected they’d throw the book at him. Trejo recalls that at this moment, he prayed to God, saying: “God, if you’re there, everything will turn out the way it’s supposed to. If you’re not, I’m f****d.”

In the end, Trejo got off scot-free. You see, there were no witnesses willing to testify against him on any of the charges he was facing. “Three thousand inmates [and] they had no witnesses,” he later stated.

This was the catalyst for Trejo to decide to turn his life around, beginning by swearing off drink and drugs. “It was almost mathematical. I thought, every time I’ve been arrested there was alcohol and drugs involved. Every time.”

At this point, Trejo had been drinking alcohol and doing various drugs since he was eight years old, including doing heroin for the first time at twelve.

When Trejo was paroled a year later in 1969, he enrolled himself in a number of programs intended to help him stay clean, including Alcoholics and Narcotics Anonymous. Trejo also became a drug counsellor, working with teenagers with substance abuse problems. “I knew that the only way I could stay out of prison was to dedicate my life to helping other people. People who are clean and sober do good things for people and seem to have good lives… When you talk about my big break, you know, I got a few of them in my life. [But] everything good that has ever happened to me has happened as a direct result of helping someone else.”

Speaking of breaks as a result of helping other people, Trejo’s big career break came in the form of a phone call from one of the kids he was counselling in 1985. The 18 year old young man said he was tempted by the large amounts of cocaine at work and needed help resisting. Without hesitation, Trejo noted down the address the young man gave and drove to meet him. Trejo explained,

So I went down and, as it turned out, the kid was working as a PA on a movie set. It was the film Runaway Train with John Voight and Eric Roberts. You have to understand that this was 1985, and on movie sets you could walk into production and cocaine lines were right there on the table. It wasn’t even hidden. It was unbelievable. 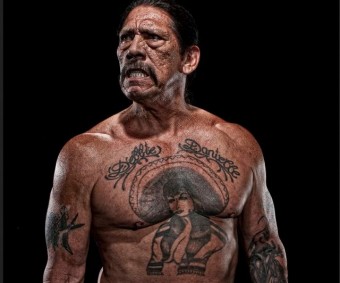 This is when Trejo’s next big break happened. As he took off his shirt to change into the prison uniform being handed to him, the film’s screenwriter, Edward Bunker, who’d also spent time in San Quentin at the same time as Trejo, just so happened to be walking by and recognised Trejo’s large chest tattoo of a voluptuous woman wearing a sombrero. (The tattoo is of one of the legendary fighting cowgirls of the Mexican Revolution. This was inked by fellow inmate Harry Ross over the course of a year or so, due to lack of materials to complete it in one sitting and because the two kept getting transferred around away from each other.)

Remembering Trejo’s skills as a boxer in the clink, Bunker approached Trejo and offered him a job training Eric Roberts (Julia Robert’s brother) to box for $320 per day (about $750 today) and to appear on screen as Eric’s opponent.

“When they said they would pay $320 a day, I said, ‘How bad do you want this guy beat up?’  They said no, no, no, and told me I had to be real careful because Roberts was highly strung and might really start swinging at me. I said, ‘For $320, you can give him a baseball bat.'”

After appearing in Runaway Train, Trejo found himself being typecast as a criminal, often being called to play a thug by filmmakers who’d tell their crew to “just get that Mexican guy with the big tattoo”, which didn’t bother Trejo.

Plus, “In movies, there’s only room for one good guy, but there are always lots of bad guys. I have no problems at all.”

Trejo also found this role easy, calling on his days as a criminal to make up for his lack of traditional acting training. “When you’re in a prison yard and something is going to come down, you really want to be locked up in your cell, but instead you have to stand and pretend you’re not afraid. That’s acting.”

For a more direct example, early in his career he was filming a scene in which he had to rob a store and managed to nail it on the first take. “[The] director asked me to kick down a door holding a sawn-off shotgun and hold up 15 people. After the scene, people clapped and said, ‘My God, where did you study?’ I said, ‘Supermarkets and Bank of America.'”

This wasn’t hyperbole. Among the many crimes he committed in his youth was robbing several stores and banks. His general modus operandi in the latter case was to intentionally cause the bank alarm to be tripped and then observe how long it took the police to respond.  (He stated back then it was usually around four minutes.)  He and his cohorts would later steal a car and go in and rob the bank for real, usually trying to keep everyone as calm as possible to expedite the robbery and avoid anyone getting trigger happy. This worked. Despite committing armed robbery on numerous occasions, he states, “I never got arrested for armed robbery… Mine was all drugs.”

After years of appearing as an extra, during which time Trejo appeared in so many movies he sometimes turns on the TV today and becomes shocked when he sees himself in a film he doesn’t remember being a part of, Trejo has become a Hollywood staple and one of its most reliable and prolific character actors. Beyond the more recognizable titles he’s appeared in like Con Air, Heat, Desperado, Machete, and Spy Kids, he “still [tries] to do four or five student films per year. You have to. You have to remember the joy and passion of a new filmmaker who has his first $100,000 and the passion that he or she brings. It’s so unbelievable to watch and nurture them.” With his name attached to a given student film, it also tends to help the budding filmmaker get the needed money to make the movie in the first place.

Outside of acting, the now 71 year old Trejo also continues to counsel youths about drinking and drugs, using his star power combined with his life experiences to reach them in a way most other adults can’t.

My passion is talking with kids… the gift of being able to go into a juvenile hall to talk to kids because it’s almost impossible because kids have no attention span whatsoever… [But] because of my role in Machete, the minute I walk onto any campus, I have their undivided attention. This movie has been such a gift because I can walk into any prison, San Quentin, whichever, and these kids will listen. They won’t listen to psychologists, parents, teachers, no one, but for me, they go out of their way to listen because they believe and trust I understand their lives. And of course I do, and did, even before I filmed Machete. My message to them is, ‘We don’t drink, we don’t use drugs, we help other people and our lives will get better. Most importantly make the decision to believe in yourself.

As for his acting career, “Acting for me is like being a contractor or a plumber or a house painter. A lot of people in the business look at acting as something special. To me, it’s just a job.”