What’s in Windshield Washer Fluid That Keeps It From Freezing?

November 24, 2015 Melissa
Munawar asks: What do they put in windshield wiper fluid to keep it from freezing? 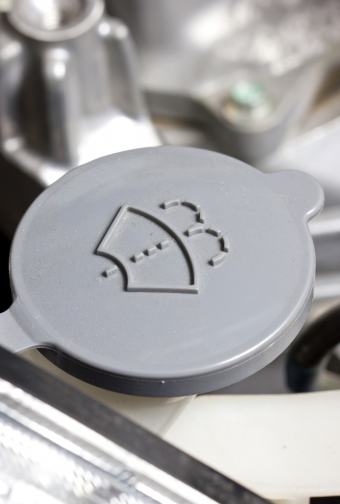 A hydrocarbon derived from natural gas, pure methanol (CH3OH) won’t freeze until temperatures drop to -143.7°F (-97.6°C); and, since it is easy to combine into a homogenous mixture with water, methanol has become a favorite de-icing additive for windshield wiper fluid.

With such a simple formula, and given the relative cheapness of methanol, some people make their own wiper fluid at home. A tricky business, methanol is a dangerous substance that should be handled very carefully. It is highly flammable, with a flash point at 52°F (11°C) and it autoignites at 867°F (464°C). To put out a methanol fire, alcohol-resistant foam and dry chemical extinguishing is recommended.

Beyond its explosive properties, it’s also highly toxic to humans. Ingesting as little as 10 mL (0.3 oz) of pure methanol can cause permanent blindness and ingesting just 30 mL may result in death, while ingesting 100 mL (3.4 ounces) almost certainly will. Other symptoms of inhaling or swallowing methanol include headache, dizziness, sleepiness, slurred speech, and blurred vision. Longer-term or repeated exposure can damage the nervous system and the liver, and may even interfere with reproduction.

The mechanism for this toxicity in humans is that methanol gets metabolized in your body into formaldehyde and then formic acid. While formic acid is readily metabolized and removed from the body, in sufficient quantities it will damage your nervous system.