Why Do Americans Refrigerate Their Eggs and Most Other Countries Don’t?

November 20, 2015 Sarah Stone
Matt asks: Why do Americans refrigerate eggs and other countries don’t? How long do eggs last unrefrigerated? 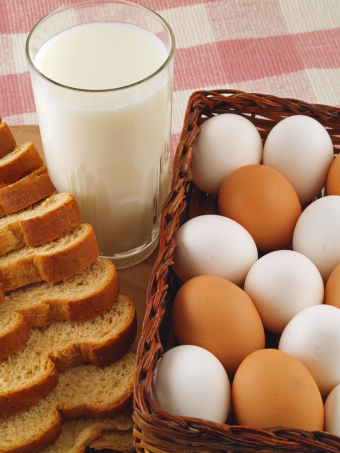 In supermarkets across the United States, Australia, and Japan, eggs can be found in the refrigerated section alongside other cold items such as milk and cheese. However, in most other countries of the world, eggs can be found stored at room temperature alongside nonperishable food items. People eat both kinds of eggs every day, usually without any ill effects. So why do some people refrigerate eggs and others don’t? The answer lies in the bacteria group known as salmonella and how a particular country chooses to make sure their eggs don’t get contaminated with it.

Salmonella enters eggs through one of two ways- via contaminating the egg internally before the hen lays it (when a hen’s ovaries have been infected); or via the porous egg shell (when an egg comes in contact with contaminated matter such as chicken manure).

Egg producers in the United States address the salmonella problem with eggs by concentrating on preventing the bacteria from entering through the shell. Towards this end, the United States Department of Agriculture (USDA) mandates that all eggs be washed with water at a minimum temperature of 90 degrees Fahrenheit and at least 20 degrees warmer than the internal temperature of the egg at the time of washing. (If it were colder than the egg, this could result in a very slight contraction, sucking in contaminated water through the shell’s pores).

The eggs will also be washed with some form of detergent and chemical sanitizer like chlorine, then are rinsed again and thoroughly dried- the latter further helping make sure pathogens can’t easily find their way through the egg’s thousands of pores. After this, the eggs are often sprayed with some form of protective coating like mineral oil. Finally, the eggs are taken into a room where they are stored at temperatures at or below 45 degrees Fahrenheit.

This effectively deals with the external sources of salmonella (and helps ensure you won’t accidentally contaminate other foods with salmonella from touching a contaminated egg shell then touching other items as you prepare food). However, this does nothing to destroy any salmonella potentially already present within the egg.  This is where the refrigeration comes in.  By keeping the eggs sufficiently cold, it mostly makes sure any salmonella present will not multiply sufficiently to cause problems given a couple month shelf life, keeping the eggs safe to eat so long as they are cooked.

Even for those eggs not internally contaminated with salmonella, it’s still best to keep them refrigerated if they have previously been. As scientific adviser to the International Egg Commission Vincent Guyonnet notes, “Once you start refrigeration, you have to have it through the whole value chain, from farm to store. Because if you stop — if the eggs are cold and you put them in a warm environment — they’re going to start sweating.”  The United Egg Producers Association further notes that condensation on egg shells “facilitates the growth of bacteria that could contaminate the egg.”

So why aren’t Europeans and others who don’t refrigerate their eggs getting food poisoning left and right from eating contaminated eggs? They rely on other methods to keep the salmonella problem in check and don’t refrigerate them at any point, though because of the sweating and contraction issues with significant temperature changes, they do recommend eggs be stored in transport and by supermarkets at specific temperatures- in the winter between 66.2 – 69.8 degrees Fahrenheit (19 – 21 degrees Celsius) and in the summer between 69.8 – 73.4 degrees Fahrenheit (21 – 23 degrees Celsius).

For starters, the European Union prohibits egg producers from washing their eggs. You see, shells have natural protection from salmonella and other contaminants via a waxy substance known as the cuticle. The cuticle coats the shell initially as a liquid when a hen lays the egg and then dries within minutes of being exposed to the air. Egg washing, when done properly, may eliminate surface contaminants, but it also washes away the cuticle and its natural protection, potentially allowing bacteria to get into the egg via its pores or hairline cracks.

Both methods of eliminating external contaminants are quite effective, but the washing strategy requires that the eggs are processed in a very precise way to be effective. If, for instance, eggs are allowed to sit in dirty washing water too long after losing the cuticle, this would be an ideal situation for microbes to quickly infect the inside of the eggs. Thus, the EU and others deem it safer to cut out the potentially error-prone middle man and simply leave the cuticle on.

Of course, by not washing the eggs at all, the occasional egg with feces and other such things will pop up (the egg being laid via the same hole the chicken poops through and the laying area potentially not being perfectly clean). But the fact that visibly dirty eggs will most definitely turn off some customers and that European Union egg farmers aren’t allowed to wash the eggs is actually seen as a net-positive by some.  For instance, Britain’s Egg Industry Council’s Chief Executive Mark Williams states of this, “In Europe, the understanding is that [prohibiting the washing and cleaning of eggs] actually encourages good husbandry on farms. It’s in the farmer’s best interests then to produce the cleanest eggs possible, as no one is going to buy their eggs if they’re dirty.”

Unfortunately, in this scenario you’ll still get the occasional egg with fecal matter or the like on it. This also increases the chances of cross contamination with handling the potentially contaminated egg shells and then perhaps touching other food items without washing your hands. But both of these problems are easily solved by simply washing the eggs (and your hands) directly before using them.

This “do nothing” method also saves an amazing amount of effort and cost in the processing of the eggs. It’s also a superior method of keeping eggs as safe as possible in areas where end customers don’t necessarily have refrigerators, as well as helps minimize the risk of egg contamination if a customer has a long drive home from the supermarket, which potentially allows the cold egg shells to form condensation giving pathogens easier access to the inside.

So, the cuticle solves the problem of external sources contaminating the inside of the egg, but how does the EU and other countries that don’t refrigerate their eggs deal with eggs that were contaminated while being formed inside the chicken? They mandate that their egg laying chickens must be vaccinated against salmonella, among other requirements, if they are to receive the Lion Quality Code of Practice seal. The result of this is that approximately 90% of chicken eggs sold in Britain come from vaccinated hens, with the other 10% coming from small farmers who don’t typically sell eggs through major retailers.

So which way of storing eggs produces fewer cases of salmonella induced food poisoning? As the aforementioned Vincent Guyonnet notes: “They’re different approaches to basically achieve the same result… We don’t have massive [food safety] issues on either side of the Atlantic. Both methods seem to work.”

But what about the numbers? In that, there seems to have never been any definitive studies (at least that I could find), but it would seem on the surface that the European method is the winner. (Though there are uncontrolled factors that could potentially be skewing the numbers, so take this with a very large grain of salt.) On average, there are approximately 142,000 cases of egg-related salmonella poisoning in the United States every year according to the U.S. Department of Agriculture. This is approximately 1 in 2,200 people infected every year (give or take depending on whether an individual is a repeat offender in a given year).  In contrast, in England and Wales in 2009, there were just 581 cases of egg-related salmonella poisoning, or about 1 in 95,000. Notably, before the British started vaccinating their chickens in the late 1990s in response to a major egg-induced salmonella outbreak, in 1997 there were 14,771 cases of egg related salmonella poisoning in England and Wales, or 1 in 3,700.

You might then be wondering why it simply isn’t mandated that United States egg producers vaccinate their chickens. This is primarily because when the last batch of rules concerning this very thing were put together, the limited number of large sample-size studies available indicated vaccination wasn’t an effective way to stop the internal contamination of salmonella in eggs. More recent vaccination methods and studies have produced entirely different results. Because of this, and the fact that henhouses and eggs are now being continually tested for salmonella contamination (with a positive result meaning the egg farmer must break all the eggs open from a batch and pasteurize them, leading to significant profit loss), approximately one-third to one-half of all egg producers in the United States have voluntarily begun vaccinating their chickens. This voluntary adoption of vaccinations was also spurred on in response to a 2010 egg-related salmonella poisoning outbreak in the United States resulting in half a billion eggs needing recalled. To avoid such problems, more and more U.S. egg farmers are jumping on board the hen vaccination train every year.

In the end, while there are pros and cons of each method of keeping eggs contaminate free, both have proven extremely effective when properly executed, though seemingly the European method has a large edge in terms of keeping people from getting sick. However, if you’ve got a refrigerator handy, it is superior in one regard- eggs that are not refrigerated have a shelf life of about three weeks. Those stored in a typical consumer’s refrigerator are generally good for about two months, and drastically longer given better regulated temperatures, something that used to be key to keeping eggs on the supermarket shelves year round.

You see, naturally most chickens will stop laying eggs in the winter as a response to shorter daylight hours. (There is a photo-receptive gland in a chicken’s eye that, when exposed to sufficient light, ultimately triggers the release of the hormone that in turn spurs egg production when present in sufficient quantities in the hen.) This created an egg supply problem that used to be solved by egg farmers in the United States via keeping the eggs at the perfect, constant chilled temperature not found in your normal consumer refrigerator which is regularly being opened and closed. This allowed egg producers to store eggs for as much as a year according to United Egg Producers’ Vice President of Government Relations, Howard Magwire. Today, of course, the problem is somewhat controversially solved with artificial light and strictly controlled egg production environments with the egg finding its way from hen to customer generally in under a couple weeks, regardless of what time of year it is.