Can a Man Test Positive on a Pregnancy Test?

November 18, 2015 TheMedicineJournal.com
This is yet another great article from our friends over at The Medicine Journal.  Check out their YouTube channel here! 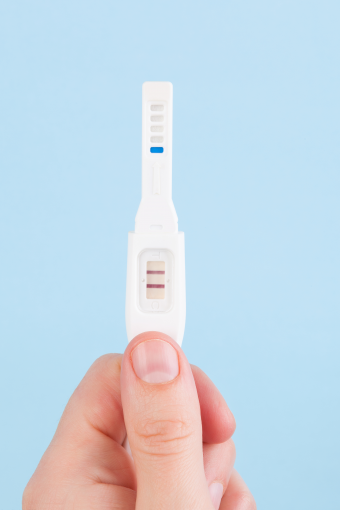 In short, yes, a man can test positive if he pees on a pregnancy tester. How?

Interestingly, several other types of tumors also secrete hCG. So sit back, read on, and find out everything you didn’t think you needed to know about hCG.

Human chorionic gonadotropins main purpose in pregnancy is to keep the lining of the uterus (endometrium) thick during the first trimester. It does this by promoting the secretion of another hormone, progesterone, by the ovaries.

Just prior to ovulation, the ovaries naturally produce progesterone. This does several things- it slightly elevates the body temperature; it makes the uterus muscles less likely to contract; and it helps create more mucus in the vagina. This all helps keep the sperm alive and more likely to reach the egg. If progesterone levels were to drop off, the lining of the uterus is thinned by shedding. After around week 20 of pregnancy, the placenta produces steroid hormones to diminish the role of hCG and thereby progesterone.

So what about hCG and cancer? It can be released by several types of cancer tumors such as cancers involving the ovaries, stomach, lungs, and testes. Cancers involving the liver, mutated epithelial cells, and those involving the endocrine (hormonal) system and nervous system are also associated with hCG release. Finally, this hormone is typically found in extremely high levels in patients suffering kidney failure.

As mentioned before, a negative pregnancy test doesn’t mean one is cancer free. There are several types of testicular cancers and not all produce elevated levels of hCG. Lumped into two categories, they’re known as seminomas and non-seminomas. These types of cancers also produce other markers that aren’t picked up by pregnancy tests, such as alpha-fetaprotein and lactate dehydrogenase. The only type that always gives off hCG is known as Choriocarcinoma. In fact, only 20%-40% of seminomas and 40%-50% of non-seminomas give off elevated levels of hCG.

HCG has many other uses than testing for pregnancy. Since it’s been known to cause ovulation within 48 hours after injection, some doctors use this method of hormone therapy prior to attempting in vitro fertilization. Beyond this, because it can help produce testosterone, bodybuilders who take steroids have been known to take hCG as a supplement. This also helps prevent some of certain steroids’ long term side effects, like shrinking testicles.

You will also often read that hCG therapy will help with weight loss, but numerous studies have shown this notion to be absolutely false.

So to sum up- yes, men can test positive on pregnancy tests and if you do, you should immediately head on down to your local clinic and find out if you have cancer.

Beyond pregnancy tests, common signs and symptoms of testicular cancer include: any lump felt on the testicle; any testicle enlargement, change in shape, or size irregularities; pain or discomfort in the scrotum or testicle; a dull ache or sense of pressure in the lower back or abdomen; a feeling of heaviness or fullness in the scrotum; and enlargement or tenderness of the breasts.

The good news for those who are particularly vigilant about such signs is that testicular cancer is one of the most curable forms of cancer there is. The 5 year survival rates are 99% if localized, meaning the cancer is still only in the testicle; 96% if regional, meaning the cancer is found in the testicle and surrounding lymph nodes or tissues; and 73% if the cancer has spread to the organs or lymph nodes away from the tumor. While 73% isn’t bad, relatively speaking, 99 out of 100 is much better, so be sure to check often!