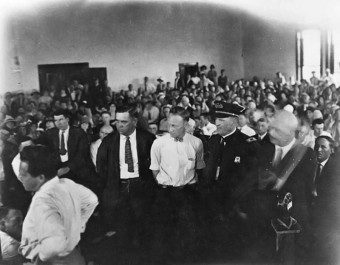 In the midst of a circus-like atmosphere on July 10, 1925, a young science teacher named John Scopes went on trial for teaching evolution in a Tennessee classroom. Four months earlier a law had been passed that made it a misdemeanor offense to “teach any theory that denies the story of the Divine Creation of man as taught in the Bible, and to teach instead that man has descended from a lower order of animals.”

Scientists saw the theory of evolution as an exciting door to new frontiers in understanding human genetics and biology, while some Christians saw it as a threat to the Bible and everything they believed in. However, again contrary to popular belief, it wasn’t evolution vs. creation from the beginning. In fact, while certainly the likes of the Church of England and certain other religious groups had issues with Darwin’s theories, largely centered around the timetables involved (millions of years, rather than less than about 6,000 years), this type of religious contention was hardly the norm initially, with the “creation vs. evolution” battle being more of a relatively modern widespread phenomenon.

(This is similar to the relatively recent Big Bang vs. Christianity battle, when in truth it was a Catholic priest, and probably the greatest scientist of the 20th century you’ve never heard of, who came up with the theory that would evolve into the Big Bang. Ironically, it was initially rejected out of hand by many scientists precisely because it seemed to correlate strongly with Christian views of the origin of the universe. Many scientists accused the priest in question of allowing his religious views to cloud his scientific judgement, despite that his ideas were backed by a whole lot of mathematical and scientific evidence, resulting in Albert Einstein declaring, “This is the most beautiful and satisfactory explanation of creation to which I ever listened,” after hearing the priest’s lecture on the topic.)

Back to evolution, in truth, many among the clergy saw no problems with Origins of the Species, and the debate among various branches of Christianity over the idea of evolution often mirrored the types of debate going on in secular circles. Some major Christian groups even simply abstained from taking an official stance- this was something for science to figure out if there was validity in the theories, as it didn’t inherently contradict many religious views. For instance, the Catholic church never banned the work, unlike so many other works they felt even hinted at going against established Catholic doctrine. (See: Galileo and Why He was Convicted of Heresy)

Like many of their forebears, by the 1920s, a lot of urban churches in the United States had rectified evolution with Scripture. But in the South the majority still clung to a literal and, in this case, complete as stated interpretation of the origin of humanity in the Bible and refused to consider any deviation from that mindset. Period.

This prevailing attitude led to the Tennessee Legislature passing the Butler Act in March 1925, which forbade teaching Darwin’s theory of evolution in public schools or universities, though it generally wasn’t thought that anyone would bother to enforce the rule.  In fact, one of the approved texts, Hunter’s Civic Biology, certain teachers were required to teach included a chapter on the theory of evolution. In essence, the teachers were required to break the law.

Needless to say, the American Civil Liberties Union was itching to challenge the Butler Act and offered to pay the legal fees of any teacher willing to fight it in court.

A teacher in Dayton named John Scopes was up for the task, though he later stated he wasn’t positive he’d actually ever taught evolution in the classroom, having only substitute taught biology, which is one of the reasons the defense didn’t want him taking the stand- after all, he might have to admit under oath he wasn’t sure if he ever taught evolution in the classroom, meaning he might be found not guilty on those grounds!

Nonetheless, after volunteering for the task of violating the law, some of his students were encouraged to turn him in for teaching evolution from the aforementioned textbook. He was duly arrested (though never detained) for his crime and a trial date was set for July 10, with the original prosecutors, Herbert E. Hicks and Sue K. Hicks actually friends of Scopes. (Incidentally, the latter’s name is generally thought to have partially inspired the song “A Boy Named Sue.”)

Scopes’ lead attorney was the well-known trial lawyer and city-slicker Clarence Darrow. He agreed to assist the ACLU in fighting the charges against the defendant. The face of the prosecution was William Jennings Bryan, a fundamentalist Christian who lobbied hard for a constitutional amendment to ban the teaching of evolution nationally.

This trial was the first ever to be broadcast nationally on radio, and press coverage was intense. In the days before the trial, throngs of people poured into Dayton to watch the spectacle of preachers in revival tents and a supposed “missing link” on display… who was really a short 51-year-man with a receding hairline and protruding jaw. Vendors sold everything from toy monkeys to Bibles and refreshments. There were even two chimpanzees in people clothes hopping around for the crowd’s amusement. Real highbrow stuff.

The defendant was a bit player in his own trial; the real stars of the show were the two flamboyant attorneys firing verbal missiles at one another and both wanting Scopes to be found guilty.

Initially, Darrow and the defense team were hoping to show that there was no conflict between evolution and the Bible, but this defense strategy was dealt a crushing blow when Judge John Raulston refused to hear expert testimony on evolutionary theory. He stated,

It is not within the province of the court under these issues to decide and determine which is true, the story of divine creation as taught in the Bible, or the story of the creation of man as taught by evolution.

In essence, the only issue was whether Scopes did or did not teach evolution in the classroom, not which view on the origin of man was correct.

The defense then decided the best strategy was to attack Bryan’s literal interpretation of the Bible. Darrow came at Bryan with incredulous queries about the latter’s unquestioned acceptance of such Biblical tales including Eve’s creation from Adam’s “rib” and Jonah being swallowed by the whale, as well as Bryan’s assertion under oath that the Biblical flood took place 4273 years ago, a number he pulled from the Ussher Bible Concordance. Darrow then pointed out that the Chinese civilization was “at least 7,000 years” old.

The following excerpt from the trial transcript recounts Darrow questioning Bryan about the flood:

DARROW: But what do you think that the Bible itself says? Do you know how that estimate (of the year the flood occurred) was arrived at?

BRYAN: I never made a calculation.

DARROW: A calculation from what?

BRYAN: I could not say.

DARROW: From the generations of man?

BRYAN: I would not want to say that.

DARROW: What do you think?

BRYAN: I could not say.

DARROW: From the generations of man?

BRYAN: I would not want to say that.

DARROW: What do you think?

Bryan was purposefully being coy, and infuriating Darrow in the process, but even so none of this made Bryan look very good. It didn’t matter though; the Judge also found all of this irrelevant to the topic at hand and dismissed it from the record, despite devoting considerable time to it.

In the end, Scopes did violate the law of the land (at least the defense never argued he didn’t teach evolution) and was found guilty. That was the verdict the defense had requested the jury come back with anyway, so they could file an appeal.

Bryan may have technically won the case, but he had been somewhat humiliated in the process, and his beliefs were publicly mocked in some circles. He died later that month in his sleep.

The Tennessee Supreme Court later upheld the Butler Act as constitutional, but went ahead and found a loophole to get Scopes out of any trouble by noting that the judge in the case had no legal right to assign Scopes’ fine at $100- that should have been up to the jury. (At the time in Tennessee, judges were not allowed to set fines above $50, but the Butler Act specified a minimum fine of $100, which is presumably why the judge set the fine at that, despite it going against the state constitution for him to do so.)

Thus, Scopes’ got off on a technicality in 1927 and the Tennessee Supreme Court recommended the Attorney General not pursue the case any further, getting Scopes off the hook, but severely angering the defense, who would have liked to see him retried so they could continue their fight.

Though no longer enforced on the whole, the constitutional issue itself remained unresolved until 1967 when the Butler Act was finally repealed after Gary L. Scott was fired for violating it in his classroom.  He then sued and was given his job back, and while the suit was ongoing a bill was passed repealing the Butler Act.

One year later, the ACLU finally got the trial it wanted when Zoology teacher Susan Epperson challenged the state of Arkansas’ ban on teaching human evolution. The trial made it to the U.S. Supreme Court who ruled that this law was unconstitutional.