April 17, 2015 Sarah Stone
Alex P. asks: What’s the difference between green and black tea? Isn’t it all just tea from the same plant? 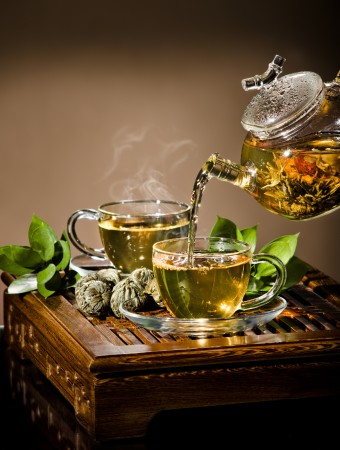 Both black and green tea is harvested from an evergreen, tree-like shrub known as camellia sinensis. Most likely originating in China, the camellia sinensis is thought to have first been used to brew a medicinal elixir during the Shang Dynasty (1600 BC to 1046 BC). By the Qin Dynasty in the third century BC, it had become a relatively popular drink using only the leaves from this plant, rather than mixed with other things as seems to have been common when used medicinally.

As for the plant itself, camellia sinensis can grow as tall as 30 ft if left untended, but is generally kept significantly shorter, usually only 3-6 ft tall, to make it easier to harvest the buds and leaves. It is those that are then processed to become green or black tea, among other types.

The difference between these teas is achieved via different processing methods. Manufacturers create green tea by picking the leaves off the plant and then heating them immediately afterwards. This is commonly done by pan firing the leaves or steaming them. Sufficient heat stops the leaves from oxidizing, allowing them to maintain their green color.

Leaves that are going to be used for black tea are allowed to ferment, or oxidize, completely. The general process here is to roll, tear, or crush the leaves to help along the oxidation process (similar to why the inside of an apple turns brown when you expose it to air). The leaves are then dried out, sometimes in the Sun or otherwise using machines. As the leaves oxidize, they gradually turn from green to black.

Other common types of tea include white and oolong.  Oolong is initially generally processed in the same way as black tea, but isn’t allowed to oxidize for as long.  Once the desired oxidation level has been reached, which varies quite a bit by type and manufacturer (some oolong tea is closer to green tea, while others is closer to black in oxidation levels), the leaves are fired similar to green tea to stop the oxidation process at that point.

White tea is made by picking the leaves and buds early in the year while the bud is still closed.  From here, the leaves may be placed out to dry in the Sun or may be dried out in some other fashion, in either case attempting to minimize oxidation during this process.