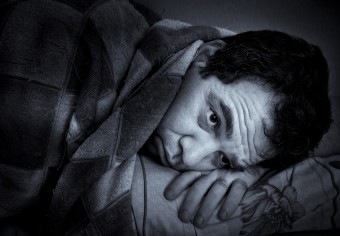 Sometimes the worst nightmares are the ones you don’t have. There are numerous conditions, disorders, and illnesses that either limit or prevents the amount of sleep an individual is able to get. Many of them are quite dangerous, but none of them are as frightening or rare as fatal familial insomnia.

Prion diseases are a category of rare fatal brain diseases that can strike both humans and animals. The disease hits the nervous system and impairs essential brain functions, which can cause memory loss, decrease in intelligence, personality and behavioral changes, and insomnia. It is caused by an altered and mutated PRNP gene, inherited from a parent, that manifests itself in misshapen protein cells that can pop up in brain tissue.

The first prion disease to be identified was in the 1730s when sheep and goats in Great Britain started to come down with a mysterious illness that caused them to be irritable, lose weight, and become uncoordinated. The illness, which became known as “Scrapie,” could kill off whole flocks at a time. Scrapie was only found in Western Europe for the first two hundred years of its known existence, but in the mid-20th century, a Michigan farmer imported sheep from England and his entire flock was killed off by the disease. Today, only Australia and New Zealand are known to be free from scrapie.

Like all prion diseases, Fatal Familial Insomnia (FFI) is caused by a change or mutation of the PRNP gene, which allows it to clump together in the thalamus region of the brain, eventually destroying the cells there. The thalamus region controls sensory and motor skills, as well as regulation of consciousness and sleep. The mutated PRNP gene “eats” holes in the brain, giving it a “sponge-like” appearance. This can lead to the inability to sleep (progressively getting worse overtime) and when sleep is achieved, very vivid dreams. It has been observed from EEG readings taken while the victim is awake show signs associated with REM sleep. Essentially, they are so sleep deprived, they enter a dream-like state when awake.

Other symptoms associated with FFI include lack of controlled movement or coordination, as well as personality changes. Depending on the severity of the symptoms, it is fatal within months or could persist (and get worse) for a few years. The normal life span once diagnosed is 12 to 18 months, but it always leads to death.

Oddly, the first signs and symptoms of FFI don’t tend to develop until our 40s and 50s. While no one knows for sure why the gene sits dormant and does not mutate until then, doctors have theorized that perhaps it is spurred on or activated by the vulnerability of the brain during middle age.

While no one knew it at the time, the first recorded case of Fatal Familial Insomnia (though, possibly not the actual first case of it) was that of a Venetian doctor in 1765. Originally thought to have died from “an organic defect of the heart’s sack,” he suffered from “paralysis” and long bouts of not sleeping, symptoms that are consistent with FFI. Not only that, as documented in the book The Family That Couldn’t Sleep, he may not have been the first member of his family to die this way. The book goes on to detail the 200 year history of this Italian family and their battles with this rare genetic disorder.

There have been other profiled cases of FFI. In 1991, a Chicago music teacher named Michael Corke, shortly after his 40th birthday, began to experience insomnia. As it got worse and worse, his physical and mental health began to deteriorate. He was sent to the University of Chicago hospital and was wrongly diagnosed with severe depression. The symptoms got worse and Corke became unable to sleep at all. Eventually, doctors induced a coma. In the end, Corke died six months after the symptoms began. Some years later, his case was featured in the BBC documentary “The Man Who Never Slept.” It is also unclear if there were others in Corke’s family who suffered from this disease.

Another interesting story is the one of Vietnam man Thai Ngoc. In 2004, he claimed that he hadn’t slept for 31 years (since 1973) after being stricken with a bad fever. Despite over 11,000 sleepless nights, he claimed that he suffered very little ill physical or mental effects. Some have claimed that Ngoc is proof that Fatal Familial Insomnia isn’t always fatal. Others, primarily doctors and experts, have claimed that Ngoc is actually sleeping, he just doesn’t know it. According to Dr. Wadhwa, some insomniacs can’t tell the difference between sleeping and being awake and engage in very brief “micro-naps” throughout the day.