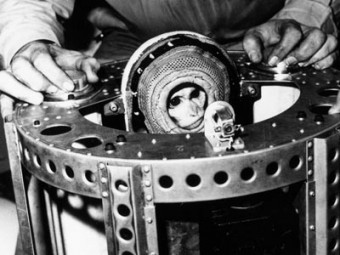 The first Earthlings sent into space were brave, calm under pressure, and heroic. They were also not human and many of them were furry. Yes, before Apollo 13, Buzz Aldrin, Neil Armstrong, and Yuri Gagarin, humans sent fruit flies, monkeys, and dogs into space to determine if living beings could survive the trip. These tests helped prove that, given a certain amount of precautions and protections, humans could endure space flight. Here is the little told story of these mostly cute and cuddly astronauts.

The V-2 rocket developed by the Germans was the first man-made object to reach the so-called fringes of space. The first test flight of this massive rocket was in May of 1944. When successful (at least, by standards of the day), it was rushed into war. By August 1944, Nazi Germany was raining down V-2 rockets onto the city of London.

Upon the end of the war, the allied forces were quite familiar with the potential of these V-2 rockets and scoured the world for V-2 rocket parts, as well as German engineers and scientists who knew how to build them. It became a competition between Britain, the US, and the Soviet Union to see who could develop their own, better, version of the V-2 the quickest. As the Cold War heated up between the Soviets and the Americas, it also became a matter of national security. (See: How Did the Cold War Start and End?)

On February 20, 1947, a mere 22 months after Germany’s surrender, the United States launched a captured V-2 rocket with fruit flies aboard. These fruit flies were the first Earthly beings, outside of microbes, in space. From its launch site in New Mexico, the rocket traveled to an altitude of about 68 miles (going past the Karman line) on a three minute, ten second suborbital mission. The purpose of this test was to determine the effects of high acceleration and cosmic radiation exposure on living beings. When the scientists retrieved the rocket, they found the fruit flies alive and well.

Sixteen months later, in June of 1948, the United States upped the ante by sending Albert, a rhesus monkey, on trip aboard a V-2 rocket. Nine pounds and anesthetized, he was placed in the nose of the V-2, which only went to an altitude of 39 miles. Unfortunately, scientists and his human handlers speculated that he died even before take-off, having suffocated in the cramped capsule. Even if he was alive, the parachute mechanism failed and the rocket had a violent crash landing. At least the name “Albert” lived on because, from that point on, the proceeding tests involving monkeys in the United States were known as the “Albert project.”

Almost exactly a year later, the US tried again. They sent another rhesus monkey, appropriately named Albert II, into the sky aboard a V-2. This time, they gave him more breathing room with a less cramped space. Also anesthetized, he reached an altitude of 83 miles, making him the first primate in space. While he was alive through about 99 percent of the flight, he was killed upon impact when, once again, the parachute mechanism failed to work properly.

It was around this time that the Soviet Union were planning the next evolution of “biological objects” being sent into space. Under the utmost secrecy due to the fear of spies, to the point that even many of the scientists working on the project didn’t know exactly what was going on, the Soviets were preparing to send dogs into the great beyond. Called “future space scouts,” their reasoning for selecting dogs was more practical and cost-efficient than science-based. First of all, as stated later by Vladimir Yazdovsky, the head of the biological program for space research at the Institute for Aviation Medicine in Moscow:

We selected dogs as biological objects because their psychology is very well-studied, they adapt well to training, are very communicative, and social with people.

Also, they were plentiful and cheap. Moscow was awash with stray dogs and finding ones to meet the space program’s exact specifications wasn’t particularly hard. The dogs had to be healthy, adults, between thirteen and fifteen pounds, light coat color (more easily seen in photos, which was a huge part of the publicity), mixed-breed (for their supposed “hardiness”), and female. (Female dogs’ anatomy made it easier for the suit and “sanitation equipment” to be properly fitted.)

The dogs were trained for space travel by being put in smaller and smaller crates, which was an attempt to get them accustomed to the restrictive space they would have to be in during flight. They also had to get used to all the suits, contraptions, and equipment they would be wearing, including a cumbersome “sanitation device.” They were fed an energy gelatinous food, made up of bread crumbs, powdered meat, and beef fat.

Many of the dogs simply didn’t react well to all of this and were not allowed to train. The ones that did had numerous health issues later, including kidney failure and constipation. 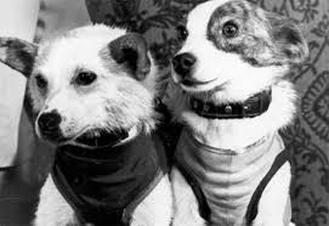 In 1951, the first two dogs – Dezik and Tsygan (Russian for “Gypsy,” see: Where Did the Gypsies Originally Come From?) – were launched, reaching an altitude of 62 miles. Upon coming back to Earth, the parachute deployed correctly. When the scientists opened the hatch, they were greeted by barking. Dezik and Tsygan had survived, becoming the first living beings outside of flies successfully recovered from a spaceflight.

The next week, Dezik was sent on another flight with a dog named Lisa. All was fine until the parachute failed to deploy. They were both killed. Upon learning about the accident, the head of the Commission for the Investigation of the Upper Atmosphere, Anatoli Blagonravov, declared that Tsygan was going to be retired from space flight and come home with him to be his pet.

After Dezik and Tsygan, the Soviets would send many dogs into space over the next six years. A few died due to mechanical failures, but many survived. The scientists and engineers studied the dogs’ vital signs, their post-flight health checkups, and observed the massive amount of film taken during the flights. They learned that while the dogs got agitated, disoriented, and perhaps a tad motion sick, they were pretty much okay health-wise during space flight. This set the stage for Latka and her travels aboard Sputnik 2. 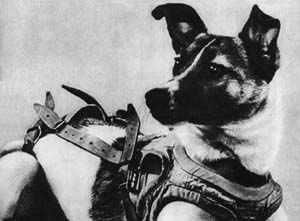 Kudryavka or “Laika” which was Russian for “barker,” initially wasn’t the best candidate for the historic flight and the designation of being the “most famous dog in history.” Another mutt named Albina was, but according to the book Animals in Space: From Research Rockets to the Space Shuttle, she just had a litter of puppies and was everyone’s favorite. The scientists didn’t want to sacrifice her for what was a suicide mission. Latka was highly sociable, patient, and scored well under harsh circumstances. So she was chosen.

Laika was put under intense training and preparation leading up to her flight. She had electrodes inserted into her to detect vital signs and heart activity. She was fitted for suits and held in preparation crates. On October 4, 1957, about a month before Lika’s launch, Sputnik I launched into the skies and became the first artificial Earth satellite in space. This energized the Soviet people and when Laika was first introduced via radio to the population on October 27, 1957, she delightfully barked into the microphone. Posters, figurines, and even comic books were quickly mocked up with Laika’s likeness. She was the most famous dog in history and ready to go to space.

Laika was kept in the capsule for three days before she was launched. During this time, her handlers were so concerned about her that they had to beg the head engineer to give her squirts of water to ensure she survived until take-off. Finally, on November 4th, she and Sputnik 2 was launched.

Now, according to records at the time, Laika was the first Earth-born living creature to go into orbit. This may not be entirely truthful. According to reports that only came out in 2002, Laika may have perished about five hours into the flight due to overheating (thermal insulation failure) and possibly even stress exacerbated by overheating. It is not known if she was even alive while Sputnik 2 orbited. This was not made public knowledge at the time, as the world’s newspapers carried headlines much like this one from the New York Times, “Soviet Fires New Satellite Carrying Dog.” In fact, as Sputnik orbited over the next four days, Russian press releases kept referencing Laika’s good condition.

Regardless of when she died, Laika was, controversially, never meant to be recovered, and after 2,570 orbits, on April 14, 1958, Sputnik 2 broke apart and disintegrated in the Earth’s atmosphere. One of the scientists involved in Laika’s mission, Oleg Gazenko, later stated of this, “Work with animals is a source of suffering to all of us… The more time passes, the more I’m sorry about it. We shouldn’t have done it… We did not learn enough from this mission to justify the death of the dog.”

Meanwhile, the Americans still had monkeys. They kept sending different types of primates into space throughout the 1950s, with most of them resulting in fatalities. The most famous and successful of these experiments was the May of 1959 launch of Abel, a rhesus monkey, and Miss Baker, a squirrel monkey. Their safe landing made them the first primates to return safely to Earth after traveling in space. Unfortunately, Abel died several days after returning to Earth during a procedure to remove the electrodes implanted in her body. After her death, she was prepared by a taxidermist and her body is currently on display at the Smithsonian’s National Air and Space Museum strapped into the harness that took her into space.

Miss Baker, on the other hand, lived another twenty five years, mostly at the U.S. Space and Rocket Center in Huntsville, Ala. When she passed away in 1984, over three hundred people attended her funeral service.

After the Soviet Union’s Yuri Gagarin became the first human to orbit the Earth on April 12, 1961, there was much less of a need for monkeys and dogs to strap on spacesuits. The age of manned space flight had dawned. Nonetheless, a chimpanzee, mice, a cat, bull frogs, newts, spiders, and many other animals have all been sent into space over the years for various scientific reasons. But one should not forget that Earth’s first headline space travelers were not humans, but fruit flies, monkeys, and dogs.