Does Drinking Gasoline Cause You to Go Blind?

February 3, 2015 Melissa
Matthew B. asks: Is it true that drinking gasoline will make you go blind? 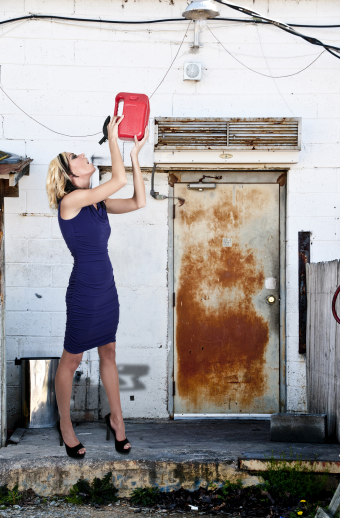 Probably not, although anecdotal evidence shows it has a strong correlation with stupidity. What it may do is cause vomiting, vertigo, confusion, drowsiness, breathing difficulties, burning in the esophagus, sore throat, weakness, and diarrhea, even when ingested in small amounts; in larger portions, it can cause loss of consciousness, internal hemorrhaging, convulsions and death (from circulatory failure and/or damage to vital organs).

To address the question at hand a little more specifically, although vision loss is a potential symptom of gasoline poisoning, complete vision loss doesn’t appear to be a common consequence for those who ingest it, unlike many of the aforementioned symptoms. Although, you will experience complete vision loss when you die. So, in that sense- yes, drinking gasoline can cause you to go permanently blind.

And just for reference, it doesn’t take much swallowed gasoline to kill you- just half an ounce can cause severe intoxication for adults and even death for small children. A 12 ounce drink of gasoline will often be fatal to most humans.

Despite these dangers, however, a brave few have overcome their (rational) fear of gasoline’s toxicity and, instead, developed a powerful addiction to petrol.

In 2011, it was reported that 71-year-old Chen Dejun, of Chongqing, China, has been drinking gasoline for over 40 years. According to one report, in 1969 when Chen picked up his habit (based on a folk remedy), kerosene was the elixir of choice; adapting to the times, he later switched to gasoline, and in 2011, he was supposedly imbibing nearly one gallon each month (about 4 ounces per day).

A couple of years earlier, it was reported that a 14-year-old boy from the Sichuan province in China was struggling with a 5-year habit. Born from a desire to turn into a Transformer, the boy’s addiction began with drinking the butane out of cigarette lighters, but soon progressed into siphoning gasoline from the family’s motorcycle and sipping on that. Although the boy’s parents state that his habit is up to nearly 3 quarts a day, experts highly doubt that claim. Regardless of the amount, the addiction has had a devastating effect on the child who, before the habit, was “a very smart boy,” but now “he doesn’t [even] know seven plus 17.”

In 2012, one episode of TLC’s My Strange Addiction told the story of 20-year-old Shannon who drank up to two ounces each day. Describing the flavor as “sweet and sour, like a tangy sauce,” Shannon also noted that although it burns the back of her throat, it also “makes me feel good.”

More recently, a 45-year old UK man, Brian Taylor, was arrested for drinking petrol despite the fact that he was under an anti-social behavior order (ASBO) prohibiting him from going near gasoline pumps. Apparently, his first gasoline-related run-in with the authorities happened in 2005, when he was found to have stolen fuel 51 times, to drink, after which, “bug-eyed and ruddy faced,” he would dance “a little jig while high on the fumes.”

Of course, not everyone who drinks gasoline does it on purpose, although that doesn’t mean they don’t pay a heavy price. In February 2012, 43-year-old, Gary Allen Banning of Havelock, North Carolina, accidentally drank a bit of gasoline when he mistook a jar of liquid that was sitting out on his friend’s counter for a palatable beverage. Wisely, he immediately spit it out before much was ingested. Unwisely, sometime later that evening, he went outside, stuck a cigarette in his mouth and attempted to light it, at which point he burst into flames. You see, he hadn’t changed his shirt and had spilled the gasoline all over it after his swig. Medics rushed him to the hospital and later to the UNC Burn Center, but due to the severity of the burns, he died early the next day.