The Curious Practice of Trepanning 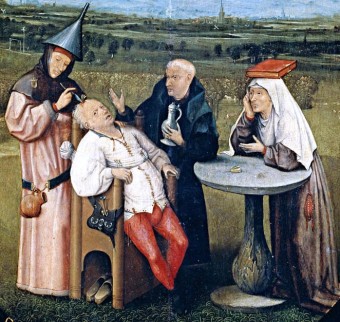 Older than writing, evidence of the practice of drilling a hole in someone’s head in order to improve their health and well-being has been found from as far back as 6,500 BC. Although most proper physicians today eschew the procedure and write it off as simply a function of superstition, the tradition of trepanning remains alive and well among adherents.

Dating to the dawn of civilization and spanning the globe, trepanning was practiced in France nearly 10,000 years ago, and evidence of it has been found in Azerbaijan that dates back to 4,000 B.C. In Central and South America, the first direct evidence of this practice dates to about the 2nd millennium B.C.

The Greek physician, Hippocrates (460-370 B.C.), noted the practice and that it was commonly performed when someone suffered a blow to the head that caused an indentation and contusion; however, he also wrote that “those [bones] which are most pressed and broken require trepanning the least.” Presumably this was because the built-up pressure from the contusion was released by the fissures in broken bones, but trapped under mere contusions.

In any event, trepanning continued to be practiced during the Middle Ages in Europe, where it was also seen as a cure for skull fractures, as well as for seizures. Because many trepanned skulls show evidence of healing, it is believed the survival rate for trepanation was relatively high, given the conditions.

Apparently, even as late as the Renaissance barber-surgeons (see The Bloody History of the Barber Pole) were using it as a method of treatment, as described by Ambroise Pare (1517-1590). A special device consisting of two cogwheels was even invented for the express purpose of drilling through the skull.

The word itself is derived from the French, trepan, which came ultimately from a Greek word, trypanon, meaning an auger (a device that bores a hole). This is consistent with the procedure, which was described in the 12th century A.D. by Abu al-Qasim al-Sahrawi who noted that a pointed borer was used to make a circle of small holes, and then one with a “spear-shaped head” was employed to remove the circle.

Although some doctors today use trepanning to deal with traumatic brain injuries, its modern popularity is primarily found among a small group of believers, who feel that trepanning can alleviate certain maladies (like migraines and chronic fatigue syndrome), as well as open the doors to higher realms of consciousness.

In the 1960s, Bart Hughes, who developed his theory while high on mescaline, believed that the closing up of the adult skull resulted in an imbalance in the ratio of cerebral spinal fluid to blood in the brain, and, thus, the adult brain wasn’t receiving the maximum amount of oxygen. To remedy this, in 1965 he used an electric drill to trepan himself.

An apparent follower of Hughes and also seeking enlightenment, in the early 1970s Amanda Feilding likewise used an electric drill to trepan herself, although diverting from Hughes, she also filmed the procedure. In Heartbeat in the Brain, Amanda first shaves her hairline, then masks her eyes with sunglasses, injects a local anesthetic, uses a scalpel to peel back the skin on her skull, and then employs a dentist’s drill (operated by a foot pedal) to bore a centimeter-wide hole in her head.

Bloody, when the film was shown at the Suydam Gallery in New York in 1978, several members of the audience reportedly fainted; however, according to Amanda, the procedure required nearly no post-operative recovery, and in fact, she went out to a party later that evening.

Still a thing, the International Trepanation Advocacy Group (ITAG) continues to promote the practice as a safe and effective method for people to “retain and improve their mental functions.” And in fact, as recently as 2000, three people conducted a trepanation in or near Cedar City Utah.

William Eugene Lyons (56) and Peter Evan Halvorson (54) (who had trepanned himself in the early 1970s) performed the procedure on an unidentified woman (who had given her consent) and filmed the event. Somehow the videotape made its way to reporter, Chris Cuomo, and it was broadcast on a February 10, 2000 episode of 20/20.

Horrified, Iron County, Utah prosecutors sought the tape, which Cuomo refused to release. On October 13, 2000, a court ordered ABC news to turn over the footage, and Mr. Cuomo to testify against the two men.

The matter never came to trial, however, since in April 2001, the two defendants each agreed to a deal where the pleaded guilty to practicing medicine without a license and were placed on three years’ probation and fined $500.