This Day in History: February 19th- Cooking Up Typhoid 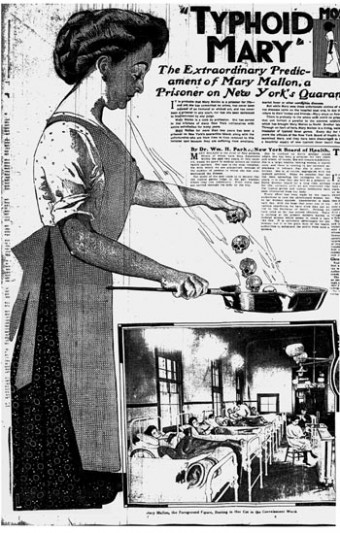 On February 19, 1910 “Typhoid Mary” regained her freedom, albeit briefly. After years of being forced to live in isolation, Mary gladly agreed to never work as a cook again if she was allowed to live among the public. Mary signed an affidavit stating that she “is prepared to change her occupation (that of cook), and will give assurance that she will upon her release take such hygienic precautions as will protect those with whom she comes in contact, from infection.”

And with that, she was free to go.

Mary Mallon, a 37 year-old Irish immigrant, was working as cook for the wealthy Warren family on Long Island during the summer of 1906. At the end of August, one of the daughters fell ill with typhoid fever. Very quickly, six of the eleven people in the household came down wish the disease.

Mr. Warren hired George Soper, a civil engineer with past experience in researching typhoid outbreaks, to look into his situation. Soper was convinced their recently acquired cook, Mary Mallon, was the cause of the outbreak in the Warren family.

Soper took at look at Mallon’s employment history back to 1900. Typhoid had followed Mary from job to job, causing 22 illnesses and the death of one young girl. Soper approached Mary and requested urine and stool samples to confirm that she was carrying the disease. She told him to take a hike, she felt just fine, and there was no way she had typhoid.

Eventually, New York Public Health Officials got involved, Mary was taken against her will, and it was proven she was the first asymptomatic carrier of typhoid in the United States. From there she was taken to an isolated cabin on North Brother Island (in the East River near the Bronx), part of the Riverside Hospital. She went kicking and screaming all the way.

So Mary was kept in solitary confinement, perfectly healthy, having committed no crime. She was imprisoned because she was the carrier of a disease that could be fatal to others if they ingested food or water contaminated with Mary’s feces. This created a plethora of moral and ethical dilemmas for the medical and law enforcement agencies involved at the time.

During her first two years in confinement, Mary sued the Health Department and lost. But in February 1910, a new health commissioner told “Typhoid Mary”, as she was already popularly known, she could go free if she swore to never seek employment as a cook again.

In early 1915, typhoid swept through the Sloane maternity hospital as 25 people became ill with the disease. When an employee noticed the resemblance between one of the hospital’s cooks with a picture they’d seen of Typhoid Mary, it was discovered Mallon had broken her agreement with the health commissioner.

Mary was sent back to North Brother Island. She lived there until she died from a stroke in 1938. An autopsy showed that she was still carrying the offending bacteria at the time of her death.