This Day in History: February 18th- More Suited to the Slums than to Intelligent, Respectable People 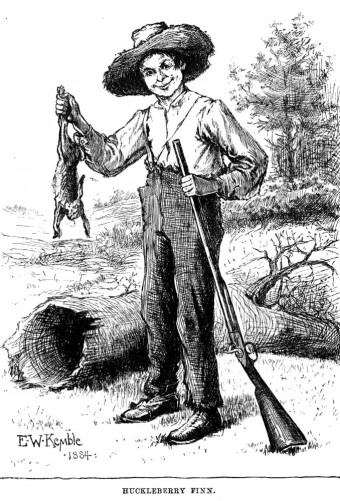 “Sequels aren’t inherently bad-remember that Huckleberry Finn was a sequel to Tom Sawyer. But Twain understood what modern storytellers seem to have forgotten-a compelling sequel offers consumers a new perspective on the characters, rather than just more of the same.” -Henry Jenkins

On February 18, 1885, Mark Twain’s celebrated yet controversial book The Adventures of Huckleberry Finn was published and soon became known as one of the “great American novels.” In Ernest Hemingway’s opinion, it was fount of “all modern American literature.” He also went on to say, “there was nothing before. There has been nothing as good since.”

Twain had begun working on the novel in 1875, and wrote it, as he said, in “fits and starts,” not sure of the direction to take, sometimes considering dropping the project for good. He described the novel to his family as “a book which I have been fooling over for 7 years.”

The character of Huckleberry Finn was first introduced in Twain’s novel The Adventures of Tom Sawyer, released in 1876. The story describes the journey of a 13 year-old boy named Huck and his friend Jim, an escaped slave, on a raft down the Mississippi River. Jim is on the run to avoid being sold, and Huck is helping him get to Ohio – and hopefully freedom. The most memorable aspect of the novel is its satirical take on social attitudes of the era such as religion, racism and politics. In general, Huck finds Jim to be wise, generous and brave. More often than not, he observes white people behaving selfishly or violently, which leads the young boy to question the unfair and hypocritical standards of antebellum society.

This was pretty heady stuff a mere two decades after the Civil War and the Emancipation Proclamation. A library in Concord, Massachusetts banned the book a month after it was published, explaining.

This didn’t bother Twain at all.

Many other libraries followed suit, such as The Brooklyn Public Library who banned it for its “obscenity” and being poorly written.  For instance, they specifically cited the fact that Twain had Huck Finn at one point “itch and itch.”  Twain’s response was, as ever, marvelous:

Ironically, the novel that had once been known for controversially taking a strong stand against slavery and racism began to be criticized for its portrayal of African-Americans by the 1950s. Particularly the use of certain racially insensitive terms is highly offensive to some, despite the context and especially in a book that is required reading for approximately 70 percent of American students. There is talk of printing a version without the offending words included as “Huck Finn” is now in the public domain, but there is also a fair amount of controversy about that as well.

Despite the furor that has always surrounded it, The Adventures of Huckleberry Finn is an American classic, lauded by esteemed literary critics everywhere as a true masterpiece. Like its author, the incomparable Mark Twain, a.k.a. Sam Clemens, it is entertaining, controversial, and profound in equal measure.