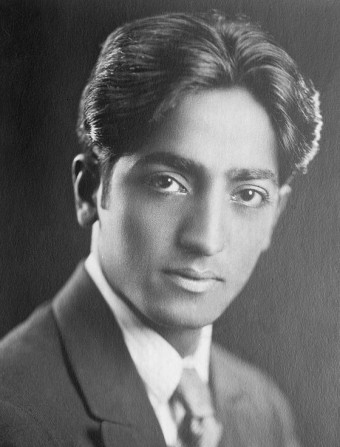 “When one loses the deep intimate relationship with nature, then temples, mosques and churches become important.” – Krishnamurti

Death came peacefully to the 90 year-old Indian philosopher Jiddu Krishnamurti, who passed away on February 17, 1986 at his home in Ojai, California. Always a reluctant guru, his final wish was that the several schools he had founded in the U.S., India and England would remain operative, but that no one person should be singled out to “carry on with these teachings in my name now or at any time in the future.”

Krishnamurti was born in 1895 in Madras, India. Through his father’s involvement with the Theosophical Society, an organization that promoted religious unity within the parameters of Indian philosophy, he attracted the attention of the organization’s leader, Annie Besant.

Besant proclaimed Krishnamurti “world teacher”, and he began a rigorous training path geared to fulfilling this role. He studied in England and France, accompanied by his brother Nitya. In 1922, the brothers moved to Ojai, California, hoping the climate would help Nitya’s tuberculosis.

Unfortunately, his brother passed away in 1925, but Krishnamurti remained in Ojai. Annie Besant started a group called the Order of the Star created solely for Krishnamurti to address his followers, but by 1929, he proclaimed the Order dissolved. He had never been comfortable with claims that he was exalted or semi-divine, and when he disbanded the group of 50,000 adherents he explained, “I maintain that the truth is a pathless land and you cannot approach it by any path what-so-ever, by any religion, by any sect.”

Krishnamurti spent the remainder of his long life writing and giving lectures around the globe on his non-dogmatic philosophy of self-reliance and self-awareness. The philosophy Krishnamurti held maintains that human misery can be traced back to the insatiable need for self affirmation. This not only includes selfishness and greed, but also such characteristics as fear, anxiety and aggression. Krishnamurti believed enlightenment could only be achieved when the deeper levels of the psyche were reached and the superficial trifles of the ego eliminated. Only then could the personality be truly integrated, and love unconditionally and selflessly.

After Krishnamurti’s death from pancreatic cancer, his body was cremated and his ashes scattered in India, England and California. The Prime Minister of India, Rajiv Gandhi, stated: “The People of India deeply mourn the passing away of Sri J. Krishnamurti. He was one of the most stimulating philosophers of our land and age. … Our country and the world are poorer with his death.”