This Day in History: February 10th- Victoria and Albert 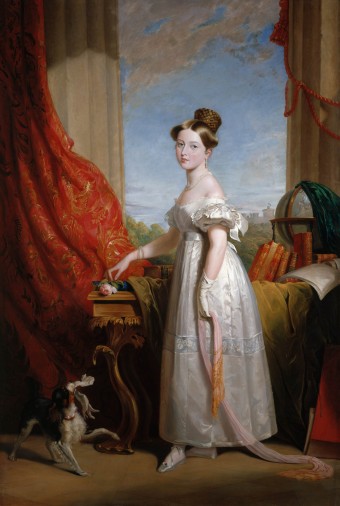 “I felt so happy when the ring was put on, and by my precious Albert.” – From the diary of Queen Victoria

February 10, 1840 dawned cold and rainy in London, but this did not dampen the spirits of the crowds gathering to witness the spectacle of their young Queen’s wedding procession. It also had no adverse effect on the bride herself, who would later describe her wedding to Prince Albert as the happiest day of her life.

Queen Victoria met Prince Albert of Saxe-Coburg-Gotha when she was 16 years old. The two were cousins, and their mutual uncle, the ever-ambitious Leopold, set up the meeting with the fervent hope the two would take to each other. He got his wish – Victoria, at least, was immediately smitten. As Queen, it was her prerogative to do the proposing, and this she did when Prince Albert was visiting at Windsor Castle on October 15, 1839.

Less than three months later, the bride set a new fashion trend with her choice of wedding gown when she donned a white dress for her nuptials with Prince Albert. It’s easy to assume that white has always represented virginity and purity, but until Victoria’s bold choice, white was considered a color of mourning and was never chosen as the color for a wedding dress. (The young Queen was not only criticized for the hue of her gown, but also for her lack of jewels and ermine – decidedly un-Royal.) After Victoria wore a white wedding gown the custom caught on, and is still the choice of most brides today.

For a Queen that had a reputation as a prude, Victoria and Albert enjoyed a loving and physically passionate relationship. In her diary, she recounted her wedding night while still enjoying the afterglow the next morning:

To lie by his side, and in his arms, and on his dear bosom, and be called by names of tenderness, I have never yet heard used to me before – was bliss beyond belief! When day dawned (for we did not sleep much) and I beheld that beautiful face by my side, it was more than I can express!

Oh! was ever woman so blessed as I am.

So much for having to close her eyes and think of England.

Their marriage produced nine children. As much as Victoria enjoyed their conception, she found pregnancy and childbirth a colossal trial and referring to them as the “shadow side of marriage.” The Queen was also a trendsetter in obstetrics, as her use of chloroform in the births of her two youngest children de-stigmatized the practice, and eased the pain of labor and birth for women everywhere, though, at least with the chloroform, not without risk.

Prince Albert died on December 14, 1861 at the young age of 42, leaving Victoria a disconsolate young widow without her other half. The Queen rarely made a decision without consulting the Prince Consort first, whether it was a matter of state or choosing a new hat. She ordered the room in which her beloved Albert passed on to be left unaltered, which it was until Victoria herself died in 1901. The Queen believed her death would finally reunite her with her much-missed husband and ordered a white funeral. Some of Albert’s clothing was also placed beside her in the coffin, along with a plaster cast of his hand.  Her coffin was interred beside Albert’s; after forty years, the pair were together again at last.