This Day in History: February 11th- The Lady in Lourdes 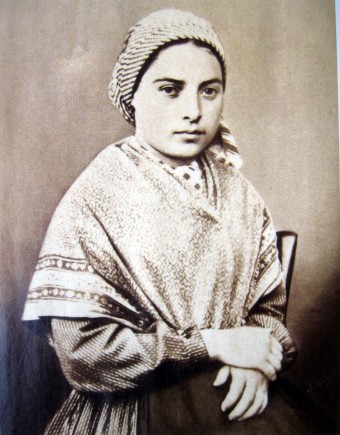 Marie-Bernarde (known as Bernadette) Soubirous was a barely literate 14-year-old girl from a poverty stricken family in the small town of Lourdes, France. On February 11, 1858, she had gone to collect firewood with her sister and a friend. When they reached a small stream near a grotto, her companions removed their shoes and crossed it, but Bernadette held back from entering the cold water, fearful due to her asthma.

As she hesitated, she claimed she heard a loud roar coming from the grotto. A rose bush near its entrance was swaying as if it was very windy, although the air was still. Then Bernadette said she saw a golden cloud emerge from the grotto, followed by

a Lady, young and beautiful, exceedingly beautiful, the like of whom I had never seen before, came and placed herself at the entrance of the opening, above the rose bush. She looked at me immediately, smiled at me and signed to me to advance, as if She had been my Mother. All fear had left me, but I seemed to know no longer where I was. I rubbed my eyes, I shut them, I opened them; but the Lady was still there continuing to smile at me and making me understand that I was not mistaken. Without thinking of what I was doing I took my Rosary in my hands and went on my knees.

When she told her parents about her vision, they ordered her to stay away from the grotto. But that parental edict didn’t stick for even three days, and Bernadette ended up returning to that same spot 17 more times. She was the only one who could see the Lady, who everyone was assuming was the Virgin Mary, but that didn’t stop the crowds accompanying her from swelling into the thousands. For the later visits, police presence was necessary.

The apparition told Bernadette to drink from a spring flowing from a nearby rock. The young girl couldn’t find the spring in question, so she began to dig around in the area. She had no immediate success, but eventually water began to flow. Bernadette and others drank and bathed in the water, which became famous for its supposed healing properties. It’s still in service today.

On March 25, the Lady finally revealed her identity when she supposedly told Bernadette, “I am the Immaculate Conception,” a doctrine that had only been proclaimed by the Pope four years previously. Bernadette asked the abbe what it meant and her mentioning this gave her a bit more credibility among the clergy, who aside from one Monsieur Estrade, thought she was fibbing or simply bananas.

The local police had their doubts as well, and Bernadette was repeatedly cross-examined over the ordeal. When confronted by skeptics, she simply replied, “I have been told to tell you about it. I have not been told to make you believe it.” The Bishop of Tarbes authenticated her visions in 1862, and Bernadette could finally turn away from all the hub-bub, join a convent, and get some peace and quiet. She became a postulate at Nevers in 1866. On her first day, she was instructed to share the story of her apparitions with the entire community – and then never speak of it again.

Bernadette had always suffered from poor health, despite drinking from the water near the grotto, and had been given the last rites three times before she died in 1879 at the age of 35. She was canonized in 1933.

Lourdes became one of the most popular pilgrimage centers of the Catholic faith. When the church on the site was consecrated in 1876, an estimated 100,000 of the faithful flocked to Lourdes for the occasion. So many people were coming on pilgrimages and for the supposed healing powers of the waters that work began on a second church in 1883.

Today, five million people are estimated to visits Lourdes each year. The first “cure” was reported in 1858, and it is claimed thousands more have taken place since. Out of these, 65 have been deemed “miraculous” by the Catholic Church.