January 22, 2015 Sarah Stone
Scott S. asks: When you look at pictures of individual snowflakes, the snowflakes are clear. I was just wondering why is snow white and not clear then? 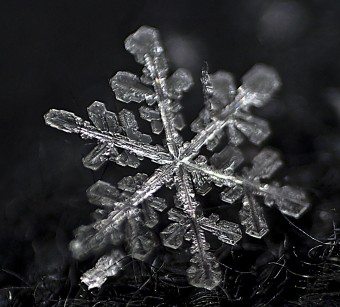 First, it’s important to understand what’s going on when we see certain colors. Visible light from the Sun or other light source comes in a variety of wavelengths that human eyes interpret as colors.  When light interacts with an object, the wavelengths that the object reflects or absorbs determines what color our eyes perceive. When an object reflects all the wavelengths of light from the Sun that are in the visible spectrum, the object appears white. Something like a fire truck appears red because the paint reflects back certain wavelengths in the red area of the visible spectrum, while absorbing the rest.

This now brings us to water, snowflakes, and snow. Pure water is quite clear, meaning the wavelengths of light more or less pass right through it, rather than being reflected back to your eyeballs. Individual snowflakes are somewhat clear, but a large concentration of these ends up being white, meaning all the light is reflected back, rather than passing straight through.  So what gives?

The key here is the way that light interacts with the mass of complex shaped snowflakes and air known as snow. Much like with water, light bends when it enters into a piece of ice, causing ice cubes or icicles to appear murky even when made from clean water. The tiny snowflakes, or ice crystals, that make up a snow bank all each bend light somewhat like an ice cube, though not quite as uniformly due to varied and complex shapes.

So when one of these tiny, beautiful ice crystal formations bend light, that light ultimately encounters another ice crystal in the clump of snowflakes where it is also bent, and then another and another. The process continues until the light reflects back out of the snow, rather than passing straight through it to the ground. Some wavelengths do become absorbed in the snow, more so when impurities like dirt are introduced, but with fresh snow, the majority of the light waves will ultimately be reflected, and thus the sunlight will appear white to you.

All that said, you may have noticed that snow can also look blue under the right circumstances. The white appearance happens when light reflects off ice crystals only a relatively small number of times, not penetrating very much into the snow. However, light that manages to penetrate deeper into snow tends to see the longer wavelengths, which exist on the red end of the color spectrum, get absorbed a little bit, leaving the shorter wavelengths on the blue side of the spectrum to be reflected back at you.

So what allows the light to penetrate more deeply in certain snow? How compact it is.  This simultaneously fuses more of the snowflakes into larger bundles of ice and gets rid of much of the tiny air pockets in the snow, resulting in white-ish blue looking snow/ice.