This Day in History: January 21st- The Pardon 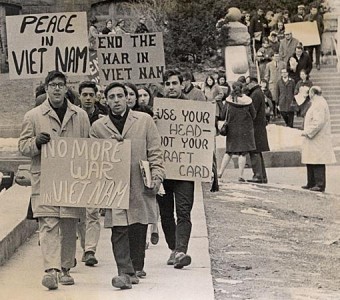 On January 21, 1977, during his first full day as president, Jimmy Carter fulfilled a promise he made during his campaign when he granted a pardon to Vietnam War era draft evaders. The president felt that “reconciliation calls for an act of mercy to bind the nation’s wounds and to heal the scars of divisiveness.”

Carter’s action wasn’t completely unprecedented. His predecessor, President Gerald Ford, had offered conditional clemency to certain draft dodgers on a case-by-case basis. Carter preferred a blanket approach, including all who evaded the draft – except deserters, violent protestors, and those with less than honorable discharges.

During the late 1960s and early 1970s, an estimated 100,000 young men left the United States to avoid service in the Vietnam War. Nine out of ten headed for Canada, while others went elsewhere or chose to hide within the U.S.

Deserters also made their way to Canada, and while Canada’s official stance was that those that deserted would be prosecuted or deported, in reality they were allowed to enter the country and were not asked too many probing questions. Those who fled to Canada knew they faced prison or forced military service if the returned to the U.S. Even after the Vietnam War had ended, the U.S. Government was still actively prosecuting draft evaders.

Jimmy Carter, a graduate of the U.S. Naval Academy, yearned to begin the process of putting the highly unpopular war and the bitter divide it had caused to rest. He believed the first step was granting draft evaders a pardon so any transplanted Americans living in exile could return home. Although some did return to the U.S., as many as 50,000 American draft evaders made Canada their new, permanent residence.

Not everyone agreed with President Carter’s Executive Order 11967. There were military veterans who considered this action a slap in the face, and felt that it would encourage future draftees to shirk their duties. On the other end of the spectrum, there were those who criticized Carter because his pardon didn’t include deserters. You can’t please everybody.