This Day in History: December 25th- The Invention of the Nativity Scene 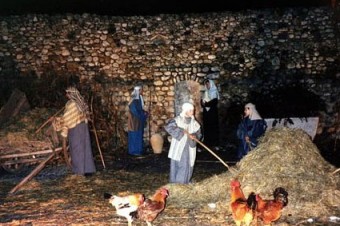 For those who celebrate Christmas, a nativity scene is a sure sign that the season is in full swing. The tradition is followed by Christians the world over. Its originator is thought to be St. Francis of Assisi, who according to tradition created the very first nativity scene in a cave outside the village of Grecco, Italy on Christmas 1223.

St. Francis reportedly was inspired to create the first nativity scene because he was horrified by the materialism and greed that was so prevalent in Italy at the time. He believed that most people had forgotten that Jesus came into the world not as a rich king, but as a poor child. (The current pontiff Pope Francis, who as popes go likes to keep it low-key, took his name in honor of St. Francis of Assisi.)

While he was making plans for the crèche, he wrote a letter to his friend Giovanni explaining, “I want to do something that will recall the memory of that child who was born in Bethlehem, to see with bodily eyes the inconveniences of his infancy, how he lay in the manger, and how the ox and ass stood by.”

After receiving the permission of Pope Honorius III to go ahead with his unprecedented idea, Francis staged the first nativity scene on December 25, 1223. The scene was set up using live people and animals, lit only by the lanterns of those present and the stars above. Midnight Mass was celebrated, and Francis preached to the congregation about the true meaning of Christmas, brought home very effectively by the living, breathing representation right before their very eyes.

When everyone had gone home after Mass, the Brothers started to gather up the hay from the manger scene to dispose of it, but Francis told them to save it for the forest animals. The legend then goes that all of the sick animals in the area that showed up to partake of the hay were immediately cured of what ailed them.

Over the years, these nativity scenes gained enormous popularity. During this period, mystery or miracle plays, which re-enacted Bible stories in local dialects, had enormous appeal in Europe. As the Mass was said in Latin, something common folk rarely were fluent in, these miracle plays were one of the only ways for simple folk to learn scripture and emotionally engage with their religion.

Live characters began to be replaced with figurines in many cases, often resembling the people of their place of origin, before ultimately the Church banned live reenactments of the nativity scene starting around the 15th century. Today, nativity sets can be mass produced in plastic, or crafted of the finest porcelain and it’s the rare kid who hasn’t had the cross-over meeting between the manger scene and Santa’s workshop (Rudolph chilling with the donkey, an elf catching up with the Little Drummer Boy). And to think this was part of an 800 year-old tradition started by a saint fighting against materialism.