This Day in History: December 26th- Setting the Bar 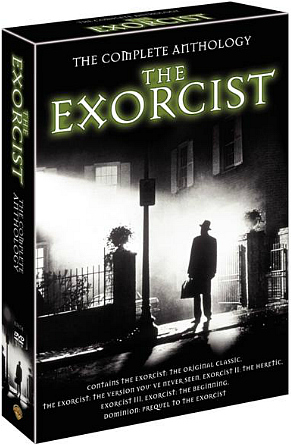 “We were around 14 years old when this came out. My friend started swearing his bed was lifting up in the night after we saw this…. It messed us up for months!” – movie goer Larry K.

On December 26, 1973, “The Exorcist” was released in theaters. The film’s dark, disturbing plot is centered on a twelve-year-old girl’s struggle with demonic possession and her eventual exorcism. In the tried-and-true good vs. evil battle, a priest who was suffering a crisis of faith ultimately wins back the child’s soul from the demon – at the sacrifice of his own life.

The special effects, though groundbreaking by early 1970s standards, might seem quaint to modern audiences, but their overall impact has not diminished. Spinning heads, subliminal faces and demonic voices may not seem like much in print, but under the skillful direction of William Friedkin and with the talents of make-up artist Dick Smith and special effects supervisor Marcel Vercoutere, there’s good reason “The Exorcist” is still considered by many to be the scariest movie of all time.

The film was based on the 1971 William Blatty novel of the same name. It was supposedly inspired by true events that transpired in Cottage City, Maryland in 1949. Over the years, Friedkin has been vague about the factual details pertaining to the original case (though the original victim is said to have been a boy); he claims he was allowed to see diaries and notes kept by the medical personnel and priests connected with the exorcism.

The reactions of those who had seen this “vulgar spectacle” of a movie were sensationally claimed to include fainting, heart attacks, and uncontrolled barfing (that scene of Regan getting an arteriogram is more puke-inducing than any demon). Suicides or deaths that happened close to a viewing of “The Exorcist” were attributed to its unholy influence. Some thought the film’s R rating too lenient, as children could still view the movie accompanied by their parents.

If merely seeing “The Exorcist” could traumatize a kid, one has to wonder what sort of effect acting in the starring role would have on a child. More than a thousand child actors were auditioned before the film-makers chose 12-year-old Linda Blair to play the part of Regan. Blair was chosen just as much for her well-adjusted personality as she was for her acting ability to ensure she’d be able to handle any potential trauma of such a horrific film-making experience.

The film garnered mostly positive reviews upon its release, with many declaring it a new benchmark in the genre of horror. But those who didn’t like it, really didn’t like it. New York Times reporter Vincent Canby dismissed the movie as “a chunk of elegant occultist claptrap”.

But whether you loved it or hated it, you certainly couldn’t ignore it. “The Exorcist” was a bonafide phenomenon, one of the top money makers of 1973, and nominated for 10 Oscars.