The religious Abraham was commanded by God to leave his homeland and travel to a distant, already occupied, place in which Abraham would eventually rule with the aid of divine blessing. Maybe it was fate that Felix Abraham Hernandez, born in Venezuela, would come to baseball’s birthplace, America, and ultimately be crowned as King Felix.

Or, perhaps, the journey to Seattle was less driven by such coincidental symmetry. Shortly after becoming a teenager, Felix was spotted by local talent scouts and the Mariners, among other teams, kept tabs on him for the next two years. The Mariners distinguished themselves not in financial resources but in personal commitment, a trait that Felix seems attracted to and one that he reflects constantly. Perhaps it also helped that the Mariners at the time had several big name Venezuelan ball players on the roster in Freddy Garcia and Carlos Guillen, along with role player Luis Ugueto and farmhand Jose Lopez[6]. Felix idolized Freddy, eventually even donning Freddy’s number 34. Coincidentally, both Garcia and Guillen were Mariners due to a trade with Houston in which the Mariners sent their last true ace, Randy Johnson, to the Astros.

About one year after Hernandez signing with the Mariners, the nickname King Felix was first uttered. So who came up with it?

What can be confirmed is that it was first written on USS Mariner, a blog devoted to the Mariners organization (and which I and Jeff Sullivan currently publish our StatCorner/Mariners podcast on). The moniker was first written on July 17, 2003 in a post referencing a Felix start that day for Class-A Everett[3].

All hail King Felix. Hernandez worked five innings last night against Spokane, allowing just one run on two hits and striking out five. He also walked four, but it’s important to remember that he’s only 17 and facing much older competition, including some college players. I’m trying not to get too excited about him, but it’s difficult not to with the way he’s pitched so far.

Former USS Mariner author Dave Cameron, now a lead writer at FanGraphs.com, knows that it was either him or fellow blog author Jason Barker who actually coined the nickname first, but the timing and original idea is lost to fuzzy memories.

To bestow such high praise and perhaps expectation on Felix was no whimsy. The USS Mariner blog has always been devoted to the analytical study of baseball and, at the time, baseball analysis thoroughly embraced the concept of TINSTAPP — There Is No Such Thing As A Pitching Prospect — a shorthand reference to the very real frequency with which pitching prospects bust. It’s amazing that such a young pitcher merely a year into a professional career, on the radar of almost nobody, would garner such a moniker.

For a while, Felix and the Mariners organization did not or would not recognize the nickname. Felix himself preferred his self-proclaimed moniker “El Cartelua” (roughly translated as “badass”)[6]. The Mariners avoided “King” out of fear for his ego or the pressure it might levy upon him.[7] But Felix would come around; he now even has a dog named King[8]. The Mariners too began acknowledging it, after being satisfied that it wouldn’t distract him on the mound or go to his head.

Affected him it has not, at least not for the negative. Felix himself described his younger self as “a thrower” compared to his present form as “a pitcher, throwing to the corners, mixing in with breaking balls.” That young version of Felix caused such consternation among his faithful due to the predictability of his fastball usage that it caused a now infamous “Open Letter” to be published on that same USS Mariner blog begging for a more mixed approach[4]. King Felix certainly delivered on that.

As for those analytics, well, at 300 career starts now, Felix sits at 3.5 career strikeouts for every walk issued and has allowed only a little more than one home run for every two starts made[10]. He just recently eclipsed 200 innings pitched and 200 strikeouts and 30 starts for the sixth consecutive season, a rare feat in all of baseball’s history. He has one Cy Young Award already, and likely a second on the way this year. By any reasonable guess, Felix has reached the 99th percentile of what a pitcher can do. Pretty neat for a guy dubbed King at 17 while in the lowest levels of pro ball. 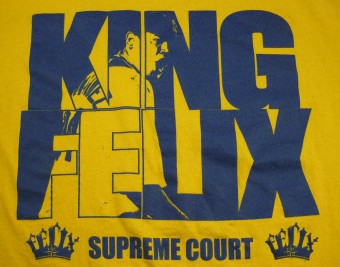 Beyond his personality, the King has grown into a local media sensation in Seattle as well. From embracing the moniker in commercials[9] to having his own dedicated “King’s Court” cheering section at each home, and more and more each road, start.

What began as a PR promotion after Felix’s Cy Young 2010 season has been accepted and spiraled beyond anyone’s dreams. Kevin Martinez, the Mariners’ VP of Marketing put it as such: “Our expectations were that we would have section 150 filled each time Felix pitched at Safeco Field. What has happened since 2011 is beyond anyone’s expectations.” It now routinely spans multiple sections, multiple levels, and sometimes extends to the stadium as a whole. All filled with fans sporting gold shirts with the King Felix moniker, some decked out in costumes of a royal theme, and waving placards styled with a crowned letter K during two-strike counts, while chanting in unison “K-K-K-K-K-K-K.”

Kings are either born or made. Felix Hernandez didn’t earn his royal title through birth; not entirely anyways. He surely won some sort of genetic lottery when it comes to his dynamite right arm, but so have thousands of others. And though Felix was bestowed with the King moniker, he has certainly done enough to earn it. Still in his 20s, all that is left is to marvel and guess just how far and for how long he will carry his crown.