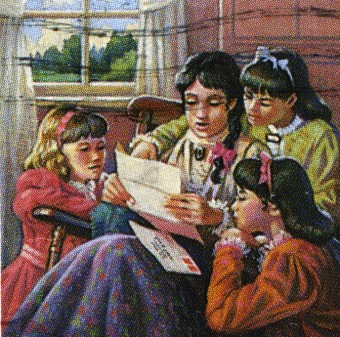 “The great literary hit of the season is undoubtedly Miss Alcott’s Little Women, the orders for which continue to flow in upon us to such an extent as to make it impossible to answer them with promptness.” – Roberts Brothers Publishing

Little Women did not just flow forth from the imagination of author Louisa May Alcott. It was more of an exercise in capitalism – at least initially. Her publisher, Thomas Niles, specifically asked Alcott to write a book about young girls that would have commercial appeal. Louisa wasn’t really that thrilled about the idea, preferring to publish a collection of her short stories instead. But between the pressure from her publisher and her father, Bronson Alcott, she agreed to write the girls’ book first.

Alcott was dubious about her ability to write such a book. She wrote in her journal in May 1868, “I plod away, although I don’t enjoy this sort of things.” She was obviously a very efficient plodder, because by June she had completed the first twelve chapters. Both she and Niles found them boring, but Nile’s niece and other young girls who read them loved it, and Alcott wrote, “They are the best critics, so I should definitely be satisfied.” Even still, the book’s massive success shocked both Louisa and her publisher.

Louisa May Alcott was born in Germantown, Pennsylvania in 1832, but lived most of her life in Concord, Massachusetts. She borrowed books from Ralph Waldo Emerson and learned gardening tips from Henry David Thoreau. Her other neighbors included Elizabeth Peabody, Nathaniel Hawthorne and Julia Ward Howe. Not a bad place to grow up.

Her father, Bronson Alcott, was an unconventional man. He was intelligent and forward thinking, but also flighty and undependable. Louisa took it upon herself to provide for her mother and sisters, and began writing as a means of doing so. She published stories in magazines, and a collection of fables she’d originally written for Ralph Waldo Emerson’s daughter Ellen. During the Civil War, she worked as a nurse and contracted typhoid. She suffered from mercury poisoning as a result of treatment for the disease, which weakened her for the rest of her life.

Little Women, based on the lives of the four March sisters is clearly an idealized version of Alcott’s own family. All of her sisters are recognizable in their literary counterparts: Her beautiful married sister Anna was Meg; her beloved sister Lizzie, who died at age 23, was Beth; and her headstrong sister May was portrayed as Amy. Louisa herself was represented by the main protagonist, the tomboyish writer Jo.

Jo became a heroine for many young girls, and Alcott, who never married, made sure she was an independent trailblazer. During the 1860s, every little girl’s purpose in life was to find a suitable young man and get married. Alcott bucked this trend in Little Women, leaving the reader hanging; implying that marriage is not the end goal. And when Jo did marry, it wasn’t to the young Laurie, whose proposal she turned down (almost unheard of), but instead to Friederich, a much older man who would seem much less suitable for her. But it was Jo’s choice to make, and she made it. A bold statement.

Little Women was Louisa May Alcott’s first bestseller and her most popular book. It enabled her to pay off all of her family’s debts, which no doubt brought her great satisfaction. When she wasn’t writing to support her family, she was busy working for abolitionist and women’s suffrage causes. She died on March 6, 1888 at the age of 55, two days after her father.