This Day in History: June 6th 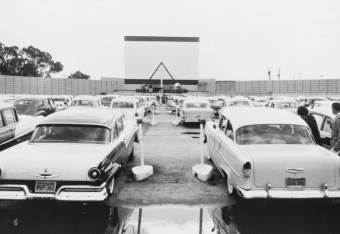 On this day in 1933, amorous teenagers and parents lacking a babysitter had reason to rejoice when curious patrons drove onto the grounds of Park-In Theaters, the world’s first drive-in located in Camden, New Jersey. The drive-in’s slogan was “The whole family is welcome, regardless of how noisy the children are.” Great.

The man to thank for the drive-in theater was Richard Hollingshead, who worked for his dad’s company Whiz Auto Products as a sales manager. An avid movie buff, Richard thought an outdoor movie theater where patrons could watch from their own cars would be pretty neat.

Hollingshead began experimenting in his driveway by nailing a screen to trees, mounting a projector on the hood of his car, using a radio to check sound levels, and testing various ways to guard against the elements. Setting up the cars proved to be tricky. If the vehicles were lined up directly behind one another, sight lines became a problem, but by spacing the cars sufficiently and providing blocks or ramps for vehicles further from the screen, Hollingshead resolved the issue.

Hollingshead received a patent for the drive-in on May 16, 1933. Park-In Theaters opened on June 6, 1933, charging an admission fee of 25 cents per car and 25 cents per person, with no charge to exceed one dollar per vehicle.

The original sound quality at the drive-in, to put it mildly, sucked. RCA Victor provided a sound system called “directional sound,” which consisted of three speakers mounted next to the screen. It caused sound delay problems for patrons parked in the rear, and noise pollution woes for people living in the area. RCA introduced in-car speakers in 1941, and in later years it became possible to tune in the movie soundtrack through the car’s AM or FM radio.

The popularity of drive-in theaters reached their zenith in the 1950s and 1960s. The main reason why so many teenagers found them appealing wasn’t lost on the older generation, who referred to drive-ins as “passion pits.” But for every swaying car with steamed-up windows, there was the family auto filled with kids in feetie pajamas. For millions of Americans, the drive-in was an integral part of their lives, from when they were kids to when they had kids of their own.

Drive-ins are becoming very hard to find these days. Among many other things, the rising cost of real estate made it very expensive to maintain such large-scale areas in urban environments as the decades passed by. Additionally, innovations in home entertainment (such as VCRs and video rentals initially and now streaming videos, big screen TVs, and affordable home projector systems) meant more people were staying at home to watch movies. The recent need to upgrade from 35mm projectors to digital (at a minimum of $70,000 per projector) has also put the nail in the coffin for many struggling drive ins in the last several years. Today only a little over 300 drive-ins remain in the U.S. with more and more disappearing every year.