This Day in History: June 5th 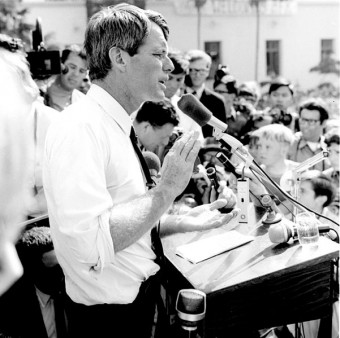 The United States in 1968 was a country torn by violence and divided by a political chasm so wide and bitter that any positive, unifying force seemed unimaginable. Then an infectiously optimistic young Senator galvanized even the most disenfranchised among us with his vision of what America should, could, and would be under his leadership.

But in less time than it took to type this, events were irrevocably altered and the possibility of that visionary leadership vanished, and history took the path we’re now familiar with.

President Johnson had decided not to seek a second term as president by 1968. Senator Robert F. Kennedy, younger brother of President John F. Kennedy and the former U.S. Attorney General, threw his hat into the ring, re-igniting the passion and hope of those who had abandoned both when Jack Kennedy was assassinated in 1963.

On June 5, 1968, Bobby Kennedy had been in Los Angeles, California all day waiting to learn the results of the Democratic primary. When the news finally came in at 11:30 pm, it was worth the wait. Bobby, his wife Ethel, and the rest of his group left the Royal Suite of the Ambassador Hotel happily chatting on their way to the ballroom, where 1,800 supporters were excitedly awaiting Kennedy’s victory speech.

After greeting his enthusiastic supporters and ending with, “Now on to Chicago, and let’s win there!” Kennedy left the cheering crowd and exited through a side door that opened to a kitchen pantry, which was a handy short-cut to the room Kennedy was using to greet the press.

As RFK walked down the corridor lined with people trying to get a look at a possible future president, a Palestinian-born 24-year-old gunman named Sirhan Sirhan opened fire with a .22 pistol, firing eight bullets. Six people were hit, but Robert Kennedy was the most seriously hurt.

Kennedy fell to the floor and Ethel rushed to his side, cradling his head. He was heard to ask, “is everybody all right?” A busboy named Juan Romero gave a set of rosary beads to Bobby, a devout Catholic. A doctor who examined him at the scene discovered a bullet hole located just below his right ear. At the hospital, two others were found under his right armpit.

It became clear that Kennedy’s only chance for survival was brain surgery, and RFK underwent an incredibly complex three-hour procedure in which bone and metal fragments were painstaking removed. Despite the best care available, Robert F. Kennedy died at 1:44 am on June 6, 1968. He a left a wife and 10 children, with another one on the way. He was 42 years old.

Sirhan Sirhan confessed and was sentenced to death, which was commuted to a life sentence when California abolished the death penalty.

Bobby was buried near his brother Jack in Arlington National Cemetery. Due to RFK’s assassination, all major presidential candidates are now afforded protection by the Secret Service.

When Robert Kennedy’s body was returned to New York and his funeral Mass was held in St Patrick’s Cathedral, his younger brother Ted, who was by then the only surviving brother out of four, paid him loving tribute:

My brother need not be idealized, or enlarged in death beyond what he was in life; to be remembered simply as a good and decent man, who saw wrong and tried to right it, saw suffering and tried to heal it, saw war and tried to stop it. Those of us who loved him and who take him to his rest today, pray that what he was to us and what he wished for others will some day come to pass for all the world. As he said many times, in many parts of this nation, to those he touched and who sought to touch him: ‘Some men see things as they are and say why. I dream things that never were and say why not.’