This Day in History: June 9th 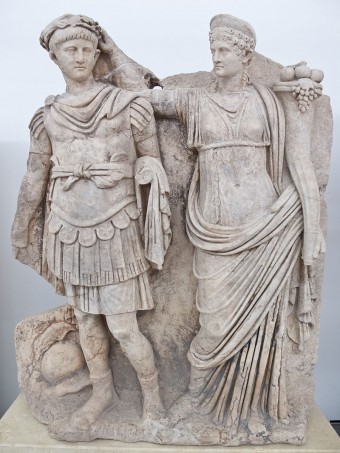 On June 9, 68 C.E., the 95 year reign of the Julio-Claudian dynasty came to an end, ushering in an era of unrest and civil war. One of Rome’s most ruthless and notorious leaders, who was responsible not only for the deaths of countless innocent subjects and Christians but also his own mother and two of his wives, committed suicide before his own troops could kill him.

Nero was born on December 15, 37 C.E., to Gnaeus Domitius Ahenobarbus and Agrippina. After Nero’s father died in 48 A.D., his mother Agrippina married her uncle, the emperor Claudius. Her powers of persuasion were obviously substantial, since Agrippina convinced Claudius to name Nero as his successor over his own son, Britannicus, and he threw in his daughter Octavia’s hand in marriage to boot.

When Claudius died in 54 C.E., most Romans thought it was with a little help from Agrippina. Nero dutifully appeared before the Senate to eulogize the late emperor, and to be recognized as the new ruler of Rome.

Agrippina tried to micro-manage every aspect of her son’s life, from the personal to the political. When Nero refused to succumb to his mother’s demands, she retaliated by supporting Britannicus as emperor. Strangely enough, Britannicus up and died the day before he officially reached adulthood. Everyone in Rome assumed Nero had poisoned Brit, but Nero insisted the kid had a seizure. Uh-huh.

His mother was still being a meddlesome pain in the butt, interfering with his various adulterous affairs, and he had her banished. He was having an affair with a woman he’d really fallen for and wanted to divorce Octavia – a decision his mom was very much opposed to. Even from a distance Agrippina’s harping was intolerable, so he had one of his flunkies bump the old girl off.

By all accounts, until 59 C.E. Nero was a decent and fair leader, if not the best son and step-brother. He lowered taxes, abolished capital punishment and supported the arts. His night-time shenanigans may have been a bit excessive and somewhat vulgar, but they were also basically harmless.

But after Agrippina’s murder, Nero became a heartless, ruthless tyrant. (I guess once you’ve offed your mom, everything else is small potatoes.) He divorced and then killed his wife Octavia, and married one of his mistresses (he eventually had her killed as well.) Any sort of criticism, real or perceived, could, and often would, be met with exile or execution.

To add to his scandalous behavior, Nero also began to perform publicly as a lyre player and a poet. We may think, “Wow. Right up there with matricide,” but in his time, a member of the ruling class behaving in such a way was absolutely unheard of, and perceived as the actions of a madman.

Then in July 64 C.E., the Great Fire raged for six days, destroying a contested portion of the city. (And no, Nero did not fiddle as it burned, as the fiddle wasn’t invented until the 11th century. Some believe the fiddle story may be another dig at Nero’s ill-advised public performances.) Although accidents do happen, many Roman citizens suspected Nero set the blaze to make room for the Domus Aurea, a villa he planned to build.

In any case a scapegoat had to be found, and Nero chose a new, underground cult called the Christians to shoulder the blame. Once accused, it was open season on the Christians, and the persecution was relentless and merciless. As punishment, they were thrown to the beasts in the circus, crucified, and set afire at night as lighting for Nero’s outdoor parties.

Nero hadn’t given up on his Domus Aurea, and intended to get it by any means possible. He sold political offices, stole money from the temples, raised taxes and devalued currency. When that wasn’t enough, he’d confiscate the property of those he suspected of treason. The people of Rome were fed up. A plot to overthrow Nero was devised in 65 C.E., but it was discovered and all the leaders were executed.

In March 68 C.E., Governor Gaius Julius Vindex rose in rebellion against Nero, and encouraged another governor, Servius Sulpicius Galba, to join him and declare himself emperor. While their forces were defeated initially, Nero’s own bodyguards ended up supporting Galba.

Nero understood when your own bodyguards are defecting to the enemy camp you’re in deep doo-doo, and beat feet. He planned to head east where he still had some support, but the officers that were still hanging around refused to take orders from him. He went back to the palace to find everyone had deserted him.

He heard that the Senate had condemned him to death by flogging, and figured he’d rather die by his own hand than suffer the indignity of death by butt-whipping. When it came down to doing the deed however, Nero faltered. He required the assistance of his secretary Epaphroditos, who helped him stab himself in the neck. As he died, Nero supposedly cried: “Qualis artifex pereo” (“What an artist dies in me!”) although how he spoke coherently with a knife in his neck is anyone’s guess.