This Day in History: June 10th 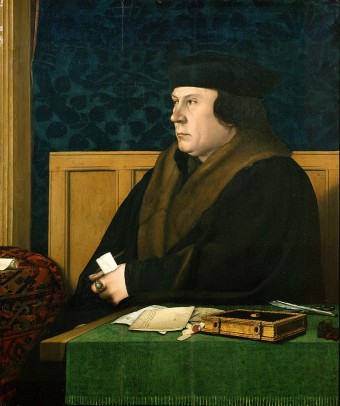 Thomas Cromwell sprang from humble beginnings but managed to shrewdly navigate the Tudor court and became King Henry VIII’s most trusted adviser. By 1540, the King had created him the Earl of Essex and he was Lord Privy Seal. Cromwell was one of England’s most influential statesmen, radically changing the course of its history within the span of a decade. And yet, during a routine council meeting on June 10, 1540, Cromwell found himself in the precarious position he’d put so many others in not long before.

Thomas Cromwell began his career at court in 1514 as a protégée of Cardinal Thomas Wolsey, who was impressed with the young man’s education and ability. When Wolsey fell out of favor with Henry VIII for his inability to resolve his “Great Matter” – the euphemism for securing an annulment from Katherine of Aragon so he could marry Anne Boleyn – it was Cromwell’s time to shine.

Cromwell found a way for Henry to ditch both Katherine and the Pope. He also instigated the Dissolution of the Monasteries, which basically meant Henry stripped all property owned by the Catholic Church for his own coffers, which worked out very nicely. And when the time came that Henry wanted Anne Boleyn to disappear so he could marry his next paramour, Cromwell even made that happen. Was there anything this guy couldn’t do?

When Henry’s third wife Jane Seymour died in October of 1537 after birthing him that hard-won son Edward, it was a given the King would marry again, because one heir was not enough – for safety’s sake, you need at least one “spare.” Since Henry had split with Rome a Catholic bride was out of the question, so the rabidly anti-Papist Cromwell began looking among the available Protestant princesses for a victim, er, bride to be the next Queen of England.

When Cromwell sent envoys to foreign courts courting on Henry’s behalf, it’s amazing that they seemed surprised at the lack of enthusiasm given ol’ Hal’s track record. Christina of Milan replied that she would only marry Henry if she had two heads (burn!), and when Marie de Guise heard that Henry was interested in her, she married his nephew James V of Scotland almost immediately. (Her future daughter would be the tragic Mary, Queen of Scots.)

Eventually Cromwell came across Anna von Jülich-Kleve-Berg, sister of the Duke of Cleves. Hans Holbein traveled to the German duchy to paint a portrait of the princess, and when Henry saw it, he became entranced almost to point of obsession. When lovesick Henry met his bride he discovered what millions of disappointed patrons of online dating sites learned hundreds of years later – don’t trust profile pictures, and chemistry can’t be gauged until you meet.

But unlike online daters, Henry couldn’t chalk it up to experience and move on. He wanted to cancel the wedding, but Cromwell told him the political fall-out would be devastating, leaving him friendless and alienated from both Catholic and Protestant Europe. His most trusted adviser’s worth was starting to slip in his estimation for getting him into this mess.

It got even worse after their wedding night. The King couldn’t even bring himself to consummate the marriage. He told Cromwell, “I liked her before not well, but now I like her much worse.” This is not what he wanted to hear, but Cromwell was hoping over time the King would grow to like, or at least tolerate, the Queen, as so often happened in arranged royal marriages.

Unfortunately for Cromwell, this was not the case, and Henry blamed him for his unhappy fate. Even worse, his enemies at court, especially the Duke of Norfolk and those associated with him, were using the King’s bitterness and resentment to their advantage. The King was so grossed out by his wife – and so turned on by the teenaged Catherine Howard, niece of the Duke of Norfolk, (like another girl named Anne Boleyn) that he left Cromwell to his fate. That’s what he gets for hooking him up with such a dog.

Thomas Cromwell was arrested by a group led by the Duke of Norfolk during a council meeting on June 10, 1540 and he was taken to the Tower. An Act of Attainder was passed against him which meant there would be no trial, and therefore no chance for him to defend himself. (The trumped up charges included issuing illegal passports, freeing people suspected of treason, heresy…well, it could hardly read the King got sick of yet another wife.)

Until an official annulment of the Cleves marriage was in the bag, Cromwell was kept alive to provide his testimony. Once he’d served his purpose, he was executed at the Tower of London on July 28, 1540. That same day, Henry married Wife Number Five, Catherine Howard, who would have her own date with the executioner just three years later.