This Day in History: June 11th 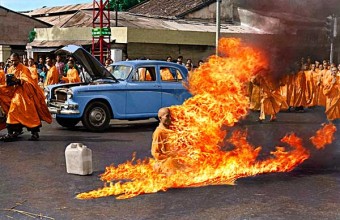 On June 11, 1963, a 67-year-old Buddhist monk named Thich Quang Duc walked into the middle of a busy intersection in South Vietnam and calmly sat in the lotus position. With the assistance of several accompanying monks, he doused himself in gasoline.

He was very clear about the reasons for what he was about to do in a letter he had left:

Before closing my eyes and moving towards the vision of the Buddha, I respectfully plead to President Ngo Dinh Diem to take a mind of compassion towards the people of the nation and implement religious equality to maintain the strength of the homeland eternally. I call the venerable, reverends, members of the sangha and the lay Buddhists to organize in solidarity to make sacrifices to protect Buddhism.

After he was completely drenched in gasoline, Thich Quang Duc lit a match, and immediately burst into flames.

Thich Quang Duc’s dramatic act of public protest was in response to the Catholic South Vietnamese government’s brutal persecution of Buddhists, who made up the majority of the country. On May 8, 1963, nine unarmed Buddhist civilians were shot and killed while they were peacefully protesting the banning of the Buddhist flag. Ngô Đình Diệm, the country’s new dictator/leader, tried to blame the violence on communist terrorists, but hardly anyone believed him.

Buddhist leaders made several more demands for an end to their religious oppression, but Diệm ignored all their pleas. When tensions had reached their peak, American journalists in the country covering the Vietnam War were quietly informed on June 10th that “something important” was going to happen in Saigon near the Cambodian embassy the following day.

Only a few journalists showed up at the specified spot. One of them was The New York Times correspondent David Halberstams, who gave this report:

I was to see that sight again, but once was enough. Flames were coming from a human being; his body was slowly withering and shriveling up, his head blackening and charring. In the air was the smell of burning human flesh; human beings burn surprisingly quickly. Behind me I could hear the sobbing of the Vietnamese who were now gathering. I was too shocked to cry, too confused to take notes or ask questions, too bewildered to even think…As he burned he never moved a muscle, never uttered a sound, his outward composure in sharp contrast to the wailing people around him.

Thich Quang Duc was deemed a bodhisattva – a spiritual being who has attained enlightenment but delays nirvana to assist others – because of his actions. His immolation helped bring about the end of Ngô Đình Diệm’s nightmarish reign, and the following rulers pledged to be more accommodating to the Buddhist majority.