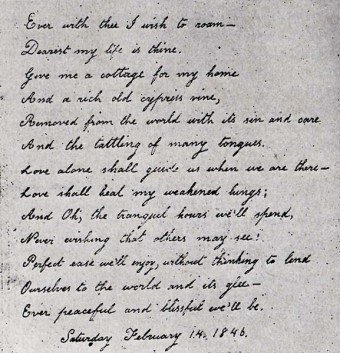 As if his stories weren’t occasionally disturbing enough, it turns out Edgar Allan Poe’s love life was more than a little creepy as well.

Poe met his bride-to-be, Virginia Clemm, when she was 7 years old, and he was 20, shortly after his mother’s death in 1829. Their parents, his natural father (David Poe) and her mother (Maria Clemm), were siblings, and Poe had moved into the Clemm home briefly before his time at West Point was to begin. Being so close in time to the death of his mother, some authors have opined that he transferred his feelings for his mother to his Aunt Maria, and later to his cousin.

Regardless, it appears that Poe and Virginia quickly became friends, and she even helped him woo one of her neighbors, Mary Devereaux. It is reported that at one point, Virginia obtained “a lock of Devereaux’s hair to give to Poe.”

That fell through and at some point, Poe’s amorous eye turned to Virginia. By 1835, people had noticed his interest in the young girl. In fact, Virginia’s half-sister’s husband, Neilson Poe, had even offered to “take her in and have her educated in an attempt to prevent the girl’s marriage at such a young age.” Outraged and fearing he would lose the pubescent love of his life, in August 1835, Poe offered to take in and provide for Virginia’s mother and the remainder of the family, in exchange for the marriage. His arguments and ardor must have prevailed because: “Poe secretly married Virginia . . . on September 22, 1835. He was 26 and she was 13, though she is listed on the marriage certificate as being 21.”

There is some dispute as to whether or not this secret ceremony ever occurred. Regardless, the two were married in public on May 16, 1836.

Many Poe apologists have claimed that the marriage between Virginia and Poe: “May have been celibate, with the two living together more as brother and sister, in any case there is no evidence that she ever became pregnant.”

In support of this theory, some point to the title character in Annabel Lee, a “maiden,” whom many say was reflective of Virginia.

This seems unlikely, however, for several reasons, including her rare beauty: “She had large black eyes, and a pearly whiteness of complexion, which was a perfect pallor. Her pale face, her brilliant eyes, and her raven hair gave her an unearthly look. One felt that she was almost a disrobed spirit…”

In addition, Virginia was devoted to Poe. She kept a picture of him under her pillow, and even wrote this acrostic poem for him as a Valentine’s Day gift in 1846:

Ever with thee I wish to roam –

Dearest my life is thine.

Give me a cottage for my home

And a rich old cypress vine,

Removed from the world with its sin and care

And the tattling of many tongues.

Love alone shall guide us when we are there –

Love shall heal my weakened lungs;

Never wishing that others may see!

Ourselves to the world and its glee –

Ever peaceful and blissful we’ll be.

Despite Virginia’s adoration, Poe apparently had a wandering eye, and at one point it landed on Frances Sargent Osgood. The two exchanged letters that, at the very least, expressed an interest. This was poorly received by a third lady, Elizabeth F. Ellet, who seemingly also had a crush on Poe (who wouldn’t?) and made a fuss. A scandal ensued that involved allegations of indiscretions and ultimately to rumors that Poe was “subject to acts of lunacy.” Although Virginia was aware of, and unconcerned with, Poe’s flirtations, the nasty scandal affected her deeply.

Beginning in January 1842, Virginia had developed tuberculosis, then known as consumption. Her health progressively worsened, and by early in 1846, she had told a friend: “I know I shall die soon; I know I can’t get well; but I want to be as happy as possible, and make Edgar happy.”

On her deathbed, some claim Virginia blamed her demise on the jealous Mrs. Ellet, stating, “Mrs. E. had been her murderer.” Virginia died on January 30, 1847.

Whatever else you can say about Poe, he apparently loved Virginia deeply. According to one observer: “He used to cry over her grave every day and kept it green with flowers.”

It appears that he channeled his love for Virginia into his work. In addition to the dead maiden in Annabel Lee, she is also believed to be the subject of the poem, Ulalume, as well as the “rare and radiant maiden . . . Lenore” of The Raven. Virginia may also have been the inspiration for Eleonara, The Oblong Box and Ligeia:

I saw that she must die . . . There had been much in her stern nature to impress me with the belief that, to her, death would have come without its terrors; –but not so. Words are impotent to convey any just idea of the fierceness of resistance with which she wrestled with the Shadow. I groaned in anguish at the pitiable spectacle . . . of her wild desire for life…