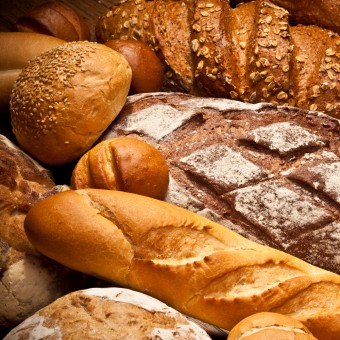 An idiom that is often used when something is new and fantastic is that, “It’s the best thing since sliced bread!” But how did this saying come to be? And what makes sliced bread so darn great? Our story begins about thirty thousand years ago, takes us through the town of Chillicothe, Missouri, and, then, to a futuristic ‘wonder’ful bread that is still on grocery store shelves today.

Humans, and potentially Neanderthals, began grinding cattail, an edible plant that is still found in wetland habitats today, into flour approximately thirty thousand years ago. These humans realized that flour, chocked full of starch and carbohydrates, was a good source of energy and allowed them to be more mobile during their nomadic days. Additionally, cooking or baking the flour made the starch taste better.  Researchers discovered this  thanks to remains and traces of starch grains embedded in fossilized food preparation tools.

The first man-made bread, likely, was unleavened, as in there was no yeast added. Today, we still eat certain types of unleavened bread, like naan, matzah, and flour tortillas.

While humans didn’t understand the mechanism behind it, at some point it was discovered that if bread was left out in the open, spores of yeast, a naturally forming microorganism that floats through the air, would infiltrate the grains and make it “raise.” Leavened bread and the use of yeast in bread-making began sometime around four thousand years ago in ancient Egypt. In fact, archaeologists have found early grinding stones and baking chambers for yeast-based bread in Egyptian ruins, as well as drawings for thousands-of-year-old bakeries and breweries (see: A Brief History of Beer).

From that point forward, bread and wheat became a staple in humankind’s diet. The domestication of wheat allowed civilizations to transition from hunters, gatherers, and nomads to farmers, growers, and urban dwellers. Bread was cooked in every household and was eaten at most meals. It came in all shapes, sizes, and consistency. For about five thousand years, bread-making was all done by hand, a necessary, but laborious practice. That is, until the industrial age.

In 1859, Louis Pasteur discovered how yeast worked, and with that, the mass production of yeast began. Charles Fleischman began selling yeast cells in test tubes to bakers in 1863. By 1868, Fleischman was wrapping yeast in tin foil. At the turn of the century, advertisements began popping up in newspapers and journals for yeast “of the purest quality.”

Stone flour mills appeared first in Europe at the turn of the 19th century and, then, in America in the 1820s and 1830s. The Erie Canal in the American northeast aided the transportation of this mass-produced flour. In fact, Rochester, New York earned the nickname “Flour City” because, within days of the canal opening, twenty flour mills began operations in Rochester, sending their product all over the east coast. Bread was no longer a homemade item, but produced for the masses as quickly, cheaply, uniform, and efficiently as possible.

The first bread slicing machines, using parallel steel blades, appeared in America in the 1860s. However, pre-sliced bread sold to the masses didn’t come about until 1928 when a man named Otto Frederick Rohwedder of Davenport, Iowa invented a device to automate this process.

From there, he struggled to obtain funding to begin again on his machine owing to the lack of interest.  The primary concern was the reduction in shelf life of the bread. Rohwedder got around part of the staleness problem by wrapping the thinly sliced loaves in wax paper directly after slicing was complete.

Finally, in 1927, Rohwedder was able to re-build the machine and produce a model ready to use in an actual bakery.  He sold his bread slicing and wrapping machine to the Chillicothe Baking Company, in Chillicothe, Missouri, about ninety miles northeast of Kansas City. The front page of the town’s newspaper announced the arrival of this new standard of living with the headline, “Sliced Bread is Made Here.”

A back page ad on July 6, 1928 claimed it was the “greatest forward step in the baking industry since bread was wrapped.” Customers loved the convenience, reliability, and consistency of sliced bread. More and more bakeries wanted their own machines, including the Taggart Baking Company in Indianapolis.

Alexander Taggart was a third-generation baker. Alexander’s father, after learning everything he knew about baking from his father while living on the Isle of Man (a small island in the Irish Sea between Ireland and Great Britain), immigrated to the US shortly after the Civil War. He opened his first bakery in Indianapolis in 1869, eventually joining forces with another baker, Burton Parrott, with whom they opened Parrott-Taggart Baking Company together.

By 1898, they had sold and help found the United States Baking Company, which merged into the National Biscuit Company, aka Nabisco (changed their name to this in 1901).

Taggert and Parrott continued to operate under their own banner, but nationally as part of Nabisco. But in 1904, Taggart sold his share of the company. According to Cluster Mag’s article “A Visual History of Wonder Bread,” between 1899 and 1919, “the value of bread and bakery products produced in Indiana grew 620%.”

Taggart must have saw this coming because he took the money he made from his sold shares and invested it into his own company, Taggart Baking Company, with his brother, Joe, and son, Alexander Jr. Within a few years, Taggart became the largest bread bakery in the state making 300,000 loaves per week. They expanded their operations and factory. In the centuries-old bread making process, machines were now replacing human hands. Taggart embraced this and began touting that their bread was the future, unlike “anything that could be baked at home.”

On May 19, 1921 in the newspaper Indianapolis Star, a small advertisement appeared (directly above Dr. William Osborne and his “Self-Adjusting Rupture Appliance”) that said simply ”WONDER? How often do you use this word every day? Check yourself.”

Finally, on May 24th, a full page revealed what all this “wondering” was about: Taggart’s Wonder Bread – “a truly wonderful bread” – was here. As put by Clutter Magazine, “this new, virgin white, 1.5 pound loaf perfectly evoked the otherworldliness of the enormous manufacturing system that was seen as America’s future.”

Within only a few years, Wonder Bread was America’s favorite bread. In 1930, Wonder Bread became the first mass-produced bread to be pre-sliced.

This brings us back to “The best thing since sliced bread.” It is thought by most etymologists that it loosely stems from the aforementioned July 6, 1928 back page ad in Chillicothe’s newspaper (“The greatest forward step in the baking industry since bread was wrapped.”) and, later, Wonder Bread’s own constant hyping along a similar vein of its pre-sliced bread.

As for the first documented reference to the exact phrase, this is thought to be in a 1952 interview where the famous comedian Red Skelton “advised” the Salisbury (Maryland) Times to “not worry about television. It’s the greatest thing since sliced bread.”

The invention of sliced bread was yet another case where things humans used to do by hand were now being done by machines, making it significantly more convenient than ever before to make things like sandwiches (which gave rise to such things as the peanut butter and jelly sandwich- see: The Surprisingly Short History of the Peanut Butter and Jelly Sandwich).

So what was the best thing before sliced bread? If you believe Chillicothe’s, it was wrapped bread, but that seems only a minor advancement. After all, whole loaves typically keep pretty well without being wrapped. Given how drastically bread helped change the way humans lived many thousands of years ago setting up so much of history, civilization, and the accumulation of knowledge since, it could possibly be said that machine-made, pre-sliced bread was the greatest thing since, well, bread.