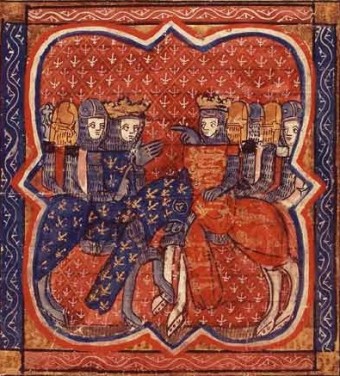 Today I found out Richard the Lionheart and Philip II of France “ate every day at the same table and from the same dish, and at night their beds did not separate them.”

There are a number of monarchs throughout history who are believed to have been gay. Richard the Lionheart and Philip II are just a couple of kings who seemingly would rather have a relationship with a man than produce an heir and a spare. However, though Richard has been treated as something of a gay icon for years, direct evidence that he and Philip actually had a homosexual relationship is scant.

The source most people point to is a report by Roger de Hoveden, who was a contemporary of the two kings. Here is an English translation of his account:

Richard, [then] duke of Aquitaine, the son of the king of England, remained with Philip, the King of France, who so honored him for so long that they ate every day at the same table and from the same dish, and at night their beds did not separate them. And the king of France loved him as his own soul; and they loved each other so much that the king of England was absolutely astonished and the passionate love between them and marveled at it.

In the case of Richard and Philip, the bed sharing and the other statements of love between them were a political statement.  The two had teamed up to overthrow Henry II, and were just announcing to the world that France and England were allies. About the notion that the two were gay, historian Dr. John Gillingham states,

The idea wasn’t even mooted until 1948 and it stems from an official record announcing that, as a symbol of unity between the two countries, the kings of France and England had slept the night in the same bed. It was an accepted political act, nothing sexual about it; just two politicians literally getting into bed together, a bit like a modern-day photo opportunity.