April 15, 2014 Daven Hiskey
Goro T asks: Why do the insides of apples turn brown when you cut the apple open? 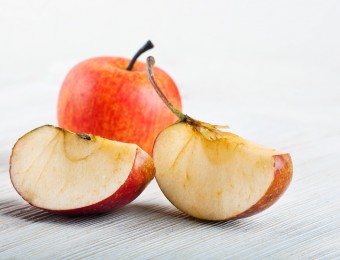 The insides of apples turn brown when exposed to air thanks to a built in defense mechanism against bacteria and fungus. The trigger for this is damage to the cells, such as when you cut the apple, which then results in certain enzymes within the cells being exposed to oxygen. When this happens, the enzymes react to the oxygen creating an oxidized layer that provides some protection against foreign bodies.

More technically, an enzyme called polyphenol oxidase (also known as tyrosinase), which is comprised of monophenol oxidase and catechol oxidase enzymes, when exposed to oxygen will result in phenolic compounds in the apple tissue turning into ortho-quinones or “o-quinones.” O-quinones are what is providing the protection from bacteria and fungi as they form a natural antiseptic.  The o-quinones themselves have no color, but they further react with amino acids and oxygen to produce melanin, which is how we get the brown color on the cut cells of the apple.

If you want to keep cut open apples from going brown quickly as they do when just sitting on the kitchen counter, simply place them in a refrigerator. This will drastically slow the chemical reactions and thus the oxidation process. You can also, of course, limit the apple’s exposure to air via sealing it in an airtight bag or jar. Another option here is to put the cut apple in water for a similar effect.

If you don’t mind a lemony flavor, spray the exposed area in pineapple or lemon juice.  This will stop the polyphenol oxidase from reacting to oxygen thanks primarily to the acidity of the juices which denature the browning enzymes. (This also works with avocados, potatoes, etc. for the same reason.) If you don’t like the taste of lemons, a similar method involves rubbing the surface of the apple in salt, sugar, or some form of syrup.

Yet another method of stopping the browning process is to heat the apple to extreme levels, which if the temperature is high enough is another way to denature the polyphenol oxidase. This is commonly done when making things like apple pie by dropping the apples in boiling water and leaving them there for a few minutes.