A Brief History of Beer 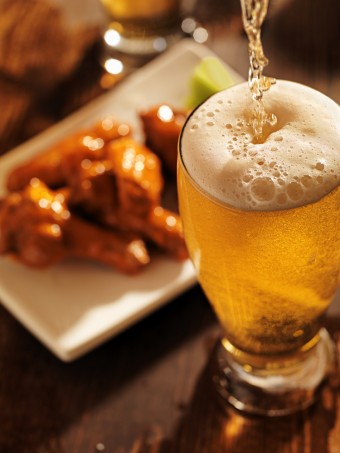 Beer brewing and drinking are activities that have been part of the human experience seemingly since the dawn of civilization. Around 10,000 years ago, mankind began to move away from living life as nomadic hunter gatherers, and began settling down in one spot to farm the land. Grain, a vital ingredient in beer making, was cultivated by these new agricultural societies.

No one is exactly sure how the process of beer making was discovered or who first discovered it, but it is thought that some bread or grain got wet, fermenting into an inebriating pile of mush thanks to yeast in the air. One has to wonder at the thought process of the person tasting the result for the first time – perhaps it was a dare between Mesopotamian frat boys… or more likely it was simply that up until very recently, no one would have dreamed of wasting any food, even putrid mush.  If there was a way to make it palatable and it didn’t kill you, people would do it to avoid waste.

What we do know is that the oldest written documentation pertaining to beer making can be traced back at least six thousand years, to the ancient civilization of Sumeria. A hymn, entitled “Hymn to Ninkasi,” which includes (translated):

Ninkasi, you are the one who pours out the filtered beer of the collector vat
It is [like] the onrush of Tigris and Euphrates.

The beverage made ancient Sumerians feel “exhilarated, wonderful and blissful”- it’s no wonder that beer was considered to be a gift form the gods.

Back then, the beer wasn’t well filtered, giving it a cloudy appearance due to the residue it contained. To try to avoid the horribly bitter solids, Sumerians would drink their beer through a straw. The ghastly bitterness did nothing to stem the popularity of beer. The Ancient Babylonians, the descendants of the Sumerian people, were brewing at least 20 different varieties of beer by 2000 B.C. All citizens were entitled to a daily beer ration, calculated by the person’s social standing. Beer was such a vital part of these ancient economies that it was even used to barter, and a portion of worker’s wages were paid in beer, efficiently eliminating the need for a middle man.

The Egyptians carried on the beer brewing tradition, altering the taste with the addition of dates. The Greeks and Romans also made beer, but as wine grew in popularity the Romans began to consider beer the drink of Barbarians. As wine was considered ambrosia gifted to man directly from the god Bacchus, beer never really stood a chance in the area. Soon, beer was only commonly seen on the very edges of the Roman Empire – places where it was next to impossible to either cultivate or import wine.

Beer is known to have been brewed by certain Germanic groups as early as 800 B.C., and the ancient historian Tacitus reported that

To drink, the Teutons have a horrible brew fermented from barley or wheat, a brew which has only a very far removed similarity to wine.

Much later, the Catholic Church also got involved in beer making, and the abbeys were instrumental in refining the methods used for brewing. In time, many religious communities owed their very existence to beer, as the profits from its sale kept many a monastery in the black.  Charlemagne himself was thought to have even trained a few people in the brewing of beer and considered it to be an important staple item.  Much like their forebears, Christians at this point also felt that beer was a gift from God, which is an idea only very recently changed thanks to rampant alcoholism in the late 19th century particularly.

Beer was not only prized for its ability to intoxicate, which was a small comfort not to be underestimated considering the tough times your average person in medieval Europe would encounter as a matter of course, but just as importantly, during the Middle Ages, and even beyond, drinking beer was a much safer proposition than drinking water. The water supply of the time was rife with disease-causing bacteria thanks to extremely poor sanitation. Besides the alcohol content, beer also went through a “cooking” process, which greatly aided in eliminating any nasty stuff in the brew. As a result, beer was consumed by people of all ages and classes, and along with bread, was a staple of most people’s daily diets for centuries.

Back in Germany, after hops had been introduced (as early as the 9th century in some areas, slowly spreading from there over the next few centuries), brewers came up with a set of standards for German beer and began commonly mass-brewing it, rather than as many did at the time- home-brewing. These mass production methods and guidelines quickly spread throughout Europe.

When you’re not making it yourself at home, you might question what’s in your beer.  As a result of this, German brewers came up with the Beer Purity Law, or the Reinheitsgebot, which was devised in 1516. This purity pledge, the first of its kind for beer, guaranteed the medieval beer drinker a certain level of quality when drinking a German brew. The pledge also indicated that all German beer must consist of only a few base ingredients: water, hops, malted barley and malted wheat, along with yeast.

The 1800s bought significant advancement in the art of beer brewing, including Louis Pasteur’s discovery of yeast’s role in the fermentation process, and the invention of pasteurization. The advent of automatic bottling, commercial refrigeration and the rise of the railroads made mass production and distribution possible across huge, sparsely populated areas like the United States. By 1880, there were an estimated 3200 breweries in operation across the U.S.

Then came very dark days for American beer drinkers, and all who enjoyed alcohol in any form. As a response to rampant alcohol abuse that was blamed for most of the problems in the U.S. (sometimes fairly, often not), the 18th Amendment ushered in the era of Prohibition, turning average citizens who decided to brew at home into common criminals.

Prohibition involving beer came to an end in 1933, but not before such atrocious acts as the U.S. government intentionally poisoning certain alcohol supplies that they knew people would drink- killing at least 10,000 American citizens. As a response to this, certain members of congress advocated increasing the program to eliminate more of those choosing to drink,  seen as undesirables in a civilized nation. (Eugenics was a popular idea at this time throughout much of the developed world; this would change thanks to the Nazis and WWII: See The Fascinating History of Eugenics) By 1935, a mere five decades after the U.S. had boasted over three thousand breweries, only about 160 breweries were still in operation.

During World War II, food shortages led to the brewing of a lighter beer, which was supposedly more appealing to the Rosie the Riveters than the heartier beers favored by the men off fighting the war. When the war ended, both kinds of beer remained popular, and the surviving breweries were quick to exploit this new market.

Today’s beer drinker is most undoubtedly spoiled for choice, with almost limitless options when it comes to what kind of beer they prefer. Beer connoisseurs also have the ability to create and brew high quality beer of their own at home easy enough, creating truly custom brews perfectly aligned with the brewer’s preference and taste. The resurgence in home brewing had led to a Renaissance of sorts in beer making, improving the quality of the finished product while also remaining true to the original methods of beer brewing. This also brings those beer drinkers full circle- going back to the earliest of days of beer making, when most made it themselves at home.