Where The Expression “Dressed to the Nines” Came From

April 18, 2014 Daven Hiskey
Samira asks: Why do we say “dressed to the nines” when someone’s dressed up? 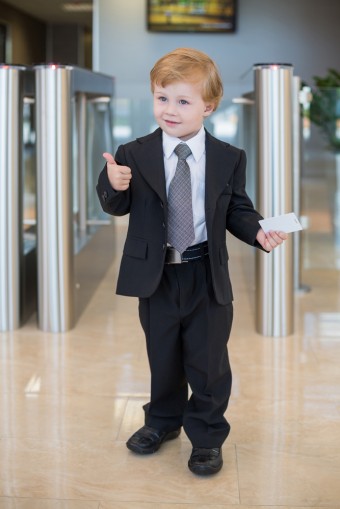 Like so many etymologies of expressions and words, we can only make educated guesses at the true origin of “dressed to the nines” or just “to the nines,” meaning more or less “to perfection.”

According to the Oxford English Dictionary, the first recorded instance of dressing to the nines was in the 1859 Dictionary of Slang, by John Camden Hotten where it states: “‘dressed up to the nines’, in a showy or recherché manner.”

However, there is at least one earlier documented instance, which seems to imply the expression was common several decades before 1859.  This can be found in The Progressive Dictionary of the English Language published in 1835.  Under the definition for “Nine” it states:

To the nines, to perfection; generally applied to dress, and sometimes implying excess in dressing… he or she was dressed up to the nines.

As you might have gathered from this, it appears “to the nines” was around before it was associated with clothing. For instance, over a century before the first documented reference of “dressed to the nines,” we have the Epistle to Ramsay by William Hamilton (1719), where he stated,

The bonny Lines therin thou sent me, How to the nines they did content me.

From this, we can see how one would come up with the expression “dressed to the nines” from the existing expression more or less meaning “perfect.” Further, we can safely discount such often put forth conjectures that the expression “dressed to the nines” came from tailors using nine yards of material to make a finely crafted suit of clothing (which is also often put forth as the origin of “the whole nine yards,” which we cover the origin of in full here.)  That’s not to mention the fact that that is an insane amount of material for just one suit.

Yet another commonly put forth explanation we can then safely ignore is that it came from the 99th Wiltshire Regiment. Around the mid-19th century, this regiment became known as “The Nines” and were particularly noted for their perfect uniform and dress. In this case, both “dressed to the nines” and “to the nines” were around long before this regiment earned this reputation. So it’s likely they got this nickname because of the already existing expression, rather than inspiring it.

So the real question is where did “to the nines” come from? We know from various documented references that this goes back to at least the early 18th century, with most of the earliest uses being in Scottish works such as the above quoted Epistle to Ramsay by William Hamilton, and several decades later in Poem on Pastoral Poetry by Robert Burns (who is also partially responsible for “Auld Lang Syne“):

Thou paints auld nature to the nines,
In thy sweet Caledonian lines…

Note he is describing how perfectly one illustrates in writing. It’s possible that “to the nines” is referencing the Nine Muses of Arts and Learning (Clio, Erato, Calliope, Melpomene, Euterpe, Polyhymnia, Terpsichore, Urania, and Thalia).  There are several documented instances of “those old nine which rhymers invocate” (1600 Shakes. Sonn. xxxviii), or “the sacred wealth of all the Nine” (1635 F. Quarles Emblemes v. iii.),  or in the 1687 work The Poetick Miscellenies of Mr. John Rawlett (among others):

The learned tribe whose works the World do bless,
Finish those works in some recess;
Both the Philosopher and Divine,
And Poets most who still make their address
In private to the Nine.

Thus, in this origin theory “to the nines” is so perfect it would be worthy of, or directly inspired by, the Nine Muses.  Besides Robert Burns using “to the nines” referencing writing, in the aforementioned 1719 work, the Epistle to Ramsay by William Hamilton, this also has “Nine Muses” connotations, again referencing someone’s well-crafted writing:  “The bonny Lines therin thou sent me, How to the nines they did content me.”

The Nine Muses had been for some time commonly referenced by poets with regards to writing.  So perhaps these two earliest documented references of “to the nines,” in both cases referring to artful writing, hints that the expression originally did indeed derive from referencing the Nine Muses.

In yet another theory proposed by etymologists, “to the nines” is thought to be originally simply a slurred way of saying “to then anes,” meaning “for the one (occasion)” or “for the one (purpose),” and it simply evolved from there.

Given the Scottish were apparently the first to use “to the nines” what do they say about the origin? The Scottish National Dictionary proposes that it originated from ninepins- with bowling a nine being a perfect throw, but this origin theory isn’t backed by any evidence and on many points strains credibility.

So in the end, “dressed to the nines” is most likely simply an offshoot of the previous “to the nines” expression, more or less meaning “perfect” or “to perfection.”  Where “to the nines” came from exactly is a bit of a mystery.  The “Nine Muses” origin theory seems to have the strongest case.  But that doesn’t necessarily mean it’s correct as the evidence is still scant.