This Day in History: February 25th 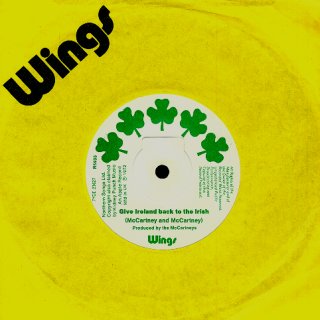 Paul McCartney had always been careful to remain fairly apolitical and uncontroversial when writing his songs. He felt his job was to entertain, not preach, and had made several not-so-veiled jabs at John Lennon and Yoko Ono’s almost constant use of their fame as a soapbox to promote political causes they believed in. So it seemed a bit out of character when McCartney released the single “Give Ireland Back to the Irish” on February 25, 1972.

The inspiration for the song, the first to be released by the ex-Beatle’s new band Wings, was the horrific “Bloody Sunday” event that occurred in Ulster, Northern Ireland on January 30, 1972, when British soldiers shot and killed 14 unarmed protesters, including seven teenagers. McCartney, who was of Irish heritage like many Liverpudlians, (John Lennon among them,) was shocked and repulsed by the cold-blooded actions of the British in Derry on that tragic day.

Paul discussed the song in later years with Beatles historian Mark Lewisohn. He described the emotions that made the usually laid-back McCartney stick his neck out:

From our point of view it was the first time people questioned what we were doing in Ireland. It was so shocking. I wrote ‘Give Ireland Back to the Irish’, we recorded it and I was promptly phoned by the chairman of EMI, Sir Joseph Lockwood, explaining that they wouldn’t release it. He thought it was too inflammatory. I told him that I felt strongly about it and they had to release it.

Predictably, the song was banned by the BBC, but “Give Ireland Back to the Irish,” as protest songs go, was rather cautious and, well, tame. At no point does Paul suggest retribution against the British oppressors, or even express the tiniest bit of rage. It’s impossible not to make comparisons with the song Lennon released about Bloody Sunday (c’mon, you knew that was inevitable) in which he expresses his support for the IRA, and accuses the British of being bastards who commit genocide…. You always knew where you stood with Lennon.

Eamonn McCann, an activist and journalist hailing from Londonderry in Northern Ireland, had this to say about the song:

Nationalists were cheered by any expression of support or solidarity as it was good for morale. But it is arguably McCartney’s most banal song. You can’t compare it to classic protest songs such as Bob Dylan’s “Only a Pawn in Their Game.” I don’t think it changed the trajectory of events at all.

Perhaps this is true, and one could argue that no rock song can claim to have genuinely changed the outcome of history, but maybe boosting people’s spirits in troubled times is enough.