This Day in History: February 24th 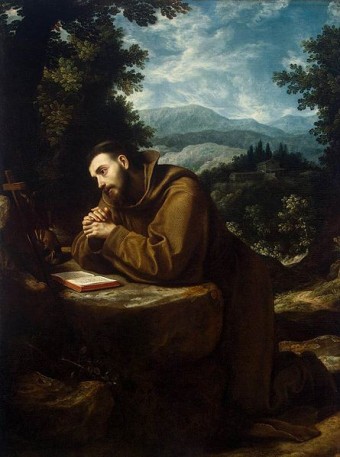 St. Francis of Assisi didn’t always live what one would consider a saintly life. His dad was a wealthy merchant, and Francis was very fond of wearing expensive duds, getting into street fights and hanging out with other privileged kids. Even so, he showed a concern for the poor and sick that was highly unusual for a young man of his means.

On one occasion, young Francis was selling velvet for his dad in the marketplace. A beggar approached him asking for a coin or two, but Francis was unable to respond to his pleas as he was in the middle of a transaction.

The beggar wandered off into the crowd, and when Francis had conducted his business he abandoned his merchandise to search for him. When Francis found him, he gave the beggar everything he had in his pockets, which earned him a thorough razzing from his buddies, and a serious dressing-down from his old man.

With each passing year, it became evident that Francis was moving farther from a life of carefree decadence, and closer to dedicating himself to the ideals of poverty, charity and love of the natural world.

After returning to Assisi from a pilgrimage to Rome, Francis was praying in the crumbling wayside church of St. Damian’s when a voice reportedly called to him, saying, “Go, Francis, and repair my house, which as you see is falling into ruin.”

If that wasn’t a big enough celestial hint, when Francis attended Mass on February 24, 1208, his life changed forever. The sermon was based on Matthew 10:9,

Do not take along any gold or silver or copper in your belts; [10] take no bag for the journey, or extra tunic, or sandals or a staff; for the worker is worth his keep.

Francis felt that God was speaking directly to him, and, knowing in his heart he had found his vocation, got rid of his possessions and began his new work.  From that day on, he spent his life preaching repentance as well as caring for the sick, poor and disenfranchised. He advocated for peace and the brotherhood of man. His love of animals was well-known (“All praise to you, Oh Lord, for these brother and sister creatures.”) He believed humans were duty-bound to protect the earth as stewards of God’s creation, and also as its inhabitants.

If you think this sounds a lot like the current Roman Catholic Pope Francis, it’s not a coincidence. The former Cardinal Jorge Mario Bergoglio’s choice of name as pontiff was a very deliberate and symbolic one. He chose to honor “a saint that transcends the Catholic Church and is loved by all people, a saint who reached out for simplicity, poverty and care for the poor,” Vatican spokesman Rev. Thomas Rosica explained shortly after Francis ascended the Papal throne in 2013.

A Pope that refuses to sit on a gold throne, wears simple garments, lives in modest apartments and is making strides to address some of the excesses so prevalent in the Church (also a pet peeve of St. Francis,) is perfectly suited to carry on his legacy.