This Day in History: February 19th 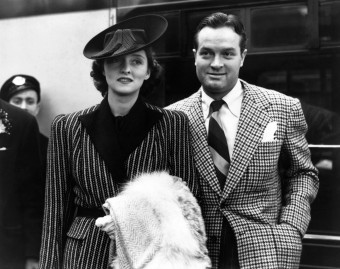 In what would become one of Hollywood’s longest lasting unions, Bob Hope and Dolores Reade wed on this day in 1934, just a year after Hope had divorced his first wife, Grace Troxell. Hope and Reade’s marriage endured almost 70 years until Hope’s death in 2003 at the age of 100. Dolores passed away in 2011 when she was 102.

According to the couple, their seven decades together began as love at first sight. When they met in 1933 at the Vogue Club in Manhattan where Dolores was performing, Bob reminisced that he fell for his future wife when he heard her sing in her “low, husky voice… soft and sweet… ‘Only a Paper Moon and Did You Ever See a Dream Walking?’” Dolores went home and told her mother that she had met her future husband that evening.

From that night on, a smitten Bob was at the Vogue Club every night, waiting to bring Dolores home after her performance. Bob figured he spent thousands of dollars tipping the doormen at Dolores’ building so he could park his car and sit with her as long as they pleased.

Hope recalled what happened next:

It wasn’t long before Dolores’ mother took her to Florida to play a nightclub date in Miami. While she was gone, I lived on long distance from morning till night. I was in love. Dolores said she was, too. She must have meant it, because she broke her Florida contract and came back to New York. We went back to sitting in front of her apartment and making plans to get married. We picked Erie, Pennsylvania, for our wedding. I can’t remember why. I was in a thick, pink fog anyway.

Three months after their first meeting, Bob Hope and Dolores Reade married on February 19, 1934 in Erie, Pennsylvania. Lucille Ball joked that it was “the smartest thing Bob Hope ever did.”

When Bob was asked by “The Saturday Evening Post” on his 95th Birthday what he attributed his long and successful marriage to, his reply was:

We’ve been married for 63 years, but I’ve only been home three weeks.

Both Bob and Dolores had acknowledged through the years that their marriage had its share of rough patches. Bob was a notorious womanizer and had several well known affairs, with one so lengthy and talked about in Hollywood that the woman in question, Marilyn Maxwell, became known as “Mrs. Bob Hope.”

These affairs were known to Dolores who tried to maintain a sense of humor about it publicly- “It never bothered me, because I thought I was better-looking than anybody else.”- privately, as you might expect, it hurt her deeply.

Nevertheless, despite this, the couple maintained an immense love and respect for one another, and a firm determination to make their marriage work. Bob’s signature tune, “Thanks for the Memory,” is actually about a couple considering divorce who reconsider after reminiscing about their shared past. Very apropos for a man whose marriage was pushed to the brink on occasion.  But, in the end, the promise they made to one another and the years spent together would always pull them back.