This Day in History: February 20th 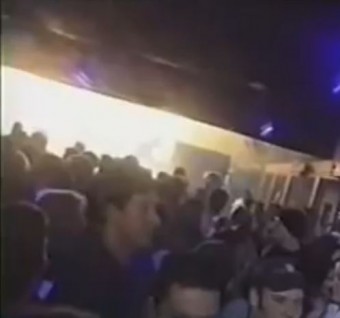 The evening of February 20, 2003 was crisp, clear and cold in West Warwick, Rhode Island. Winters in New England tend to be long and monotonous, and what better way to stave off cabin fever than by checking out a band at a local club?

The 80’s band Great White was in town playing at The Station, a small, no-frills, don’t-wear shoes-you-care-about club that held a few hundred people. Quite a step down from the heady days when Great White was enjoying A-list rockstar status thanks to their mega-hit “Once Bitten Twice Shy,” but that’s the nature of the business.

Shortly after 11 p.m., Great White took the Station’s tiny stage and began their opening song. Their road manager, Daniel Biechele, set off the band’s pyrotechnic display as he had for so many other gigs, but this time a perfect storm of bad circumstances collided that resulted in one of the most deadly fires in recent U.S. history.

As the audience crowded closer to the stage to see the band, sparks from the pyrotechnic effects ignited the foam soundproofing of the club’s low ceiling, and within minutes the mainly wooden interior was engulfed with flames.

Thick, black smoke filled the air, and people began to panic. They rushed towards the exits, but because of the dense smoke many couldn’t make out where they were located, and the ones that could were bottlenecked at the doors, piled on top of each other, unable to escape. Most of those who died were found near the exits.

Station survivor Lisa Shea told CNN the day after the fire that:

Here’s another account by cameraman Brian Butler who filmed the fire starting and the subsequent burning of the building:

At first, there was no panic. Everybody just kind of turned. Most people still just stood there. In the other rooms, the smoke hadn’t gotten to them, the flame wasn’t that bad, they didn’t think anything of it. Well, I guess once we all started to turn toward the door, and we got bottle-necked into the front door, people just kept pushing, and eventually everyone popped out of the door, including myself.

That’s when I turned back. I went around back. There was no one coming out the back door anymore. I kicked out a side window to try to get people out of there. One guy did crawl out. I went back around the front again, and that’s when you saw people stacked on top of each other, trying to get out of the front door. And by then, the black smoke was pouring out over their heads.

I noticed when the pyro stopped, the flame had kept going on both sides. And then on one side, I noticed it come over the top, and that’s when I said, ‘I have to leave.’ And I turned around, I said, ‘Get out, get out, get to the door, get to the door!’ And people just stood there.

There was a table in the way at the door, and I pulled that out just to get it out of the way so people could get out easier. And I never expected it take off as fast as it did. It just—it was so fast. It had to be two minutes tops before the whole place was black smoke.

When the next day dawned, what was left of The Station – a pile of, charred, blackened wood – was still smoldering. 100 people had perished in the blaze, and another 230 were injured. Only 132 people escaped without physical harm.

There was plenty of finger-pointing as to who was at fault, and also plenty of blame to go around. The Station’s owners, Great White and their management, the West Warwick fire marshall, among others, all had their actions, or lack thereof, called into question.

After plenty of legal wrangling, Great White’s road manager, Daniel Biechele, who set off the pyrotechnics that caused the fire, pled guilty to over 100 counts of involuntary manslaughter. In order to “set an example,” Biechele was sentenced to 15 years in prison, with four years mandatory and his final 11 years ultimately suspended. The families of some of the victims petitioned for his early release, and he was free by March 2008.

Jeffrey A. and Michael A. Derderian, who owned the nightclub, were fined $1.07 million for not providing their employees with adequate worker’s compensation insurance, including four who died in the fire. Jeffrey received a 10-year suspended sentence, 3 years probation and 500 hours of community service, while his brother Michael was sentenced to 15 years, with four years mandatory and 11 suspended. He was granted an early release in June 2009.

In the spot where The Station used to stand there are 100 wooden crosses, fashioned with wood recovered from the remnants of the charred building. 100 crosses to represent each life lost that February night. There are plans in the works to build a formal memorial to those lost on that spot, but one has to wonder if it could be any more poignant than those simple wooden crosses.