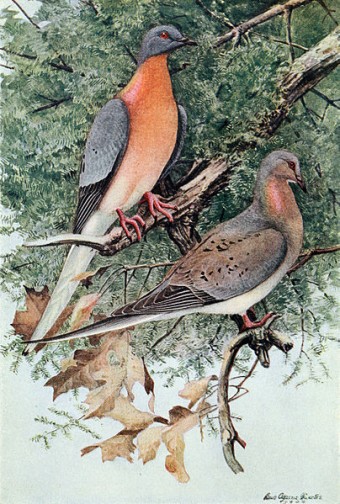 Martha was a very lonely bird. She had once been part of a pair, with her male counterpart George, but he had died several years before. So, for the final years of her life, Martha sat in her one-bird cage alone. The Cincinnati Zoo offered a thousand dollar reward (about $23,000 today) to anyone who could track down a mate for Martha. Unfortunately, there were no mates left for her.

On September 1, 1914, Martha, the last known passenger pigeon, died at the Cincinnati Zoo. Just like that, a bird that numbered in the billions about a half century before, was gone.

The passenger pigeon once dominated the North American skies. It has been estimated that when Europeans first arrived to this continent late in the 15th century, there were three to five billion passenger pigeons already here. To put that in perspective, its distant cousin, the rock pigeon – the birds you see hanging out in courtyards eating bread crumbs – number about 260 million worldwide. 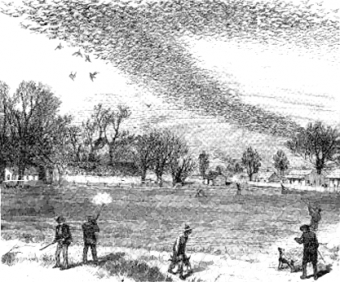 Legends abound about how these birds used to black out the sky when they moved en masse. John James Audubon, the famed naturalist and ornithologist, once said he saw a flock create a full “solar eclipse” for three days as it passed. While this is *probably* a bit of an exaggeration, accounts from towns across North America, like Columbus, Ohio and Fort Mississauga, Ontario, made it seem like a mass of passing passenger pigeons was something out of the Bible, even apocalyptic in nature. In fact, it’s estimated that the largest flocks of passenger pigeons were second only to the Rocky Mountain locusts in group size.  For reference, the Rocky Mountain locusts could potentially swarm an area the size of California, with an estimated 12.5 trillion locusts in the largest such swarm ever recorded.

As for the passenger pigeon, when the birds nested, they formed colonies that were extraordinary in size. In 1871, a colony in central Wisconsin was recorded to have occupied 850 square miles, a little larger in size than the entire country of Georgia.  In 1866, a passing flock of passenger pigeons was estimated to contain 3.5 billion of the birds, with the width of the flock about 1.5 miles and the length about 300 miles.  Needless to say, if you were traveling under the flying column, an umbrella of some sort probably would have been a good idea.

So, what happened to these birds? How, in such a short time, could the passenger pigeon go from being more numerous than all other North American birds combined to extinct? If you guessed “humans,” you’re correct.

According to a hunting journal in 1913, the passenger pigeons were known to be “the gypsies of the birdom.”  They traveled en masse to wherever they could find food and nesting habitats. They were known to travel up to eighty miles daily from their roost in search of food. And they ate… a lot.  They had fondness for soft fruits like blueberries, strawberries, and figs. They also ate acorns and chestnuts. Henry David Thoreau once wrote, “It is a wonder how pigeons can swallow acorns whole, but they do.”

The plentiful chestnut, maple, oak, and pine forests of North America not only provided food to the passenger pigeon, but a home and a place to nest (or roost).

Those trees also provided ample firewood to humans. By the 18th and 19th centuries, the human population on the continent was exploding — from under four million in 1790 to seventy-six million by 1900. As human numbers grew, land was needed to accommodate.  Unfortunately, this was the same land the passenger pigeons occupied.

As much as human settlement deforested the country, the pigeons did a pretty good job themselves in wreaking havoc in an ecosystem. An entire flock would pick an area to nest and occupy that location like an army, often weighing down tree limbs so much that they would snap right off. Further, the combined droppings of the mass of birds ended up being toxic to certain trees and could kill them.

In the definitive book about passenger pigeons, “A Feathered River Across the Sky: The Passenger Pigeon’s Flight to Extinction” by Joel Greenberg, he writes that if a “tornado had visited the forest before the occupation of birds, the damage might have been less…”

But deforestation was only a contributing factor in the extinction of the passenger pigeon. The main reason they went from billions to zero in about a half century was because they were just so darn tasty, or at the very least, abundant and easy to kill.

When the first humans started showing up fifteen thousand years ago in the northern hemisphere, they immediately began including passenger pigeons in their diet.  When Europeans began settling, they quickly figured out that passenger pigeons were a cheap source of food. The meat became quite popular with the poor, simply because anyone could at least make a few kills among the heavily populated nests. Even children could knock out a few pigeons and start clubbing away. Squabs- pigeon chicks- would get so chubby on “pigeon’s milk,” a liquid high in protein and nutrients that was regurgitated by both parents, that they would move very slowly, making them easy prey.

By the mid 19th century, professional pigeon trapping was a major industry. Trappers were making money hand over fist.  By 1855, the number of passenger pigeons were noticeably declining, though the flocks were still massive as noted above, so very little was done about it.

In 1857, a bill was presented to the Ohio State legislature, but was quickly dismissed. A report was filed that read,

The passenger pigeon needs no protection. Wonderfully prolific, having the vast forests of the North as its breeding grounds, traveling hundreds of miles in search of food, it is here today and elsewhere tomorrow.

A huge nesting area was found in Petoskey, Michigan in 1878. Trappers flocked there and, according to the Smithsonian, over a five month period 50,000 birds per day were killed. This turned out to be one of the last large nesting areas in North America.  As this fact became apparent, a bill was finally passed making it illegal to trap pigeons within two miles of their nesting area.

By 1890, the wild passenger pigeon was nearly completely eradicated. In 1897, the Michigan state legislature passed a bill putting a ten year ban on the killing of passenger pigeons. But it was too late.  Seventeen years later, the last known living passenger pigeon would die alone in her cage.