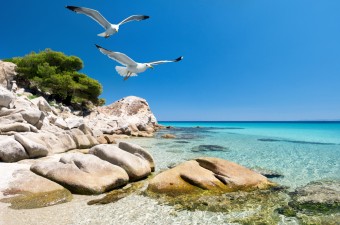 Seagulls, or gulls depending on how much you dislike syllables, are considered a pest to many, a minor, avoidable annoyance to many more and the harbingers of death OH GOD LOOK AT THEIR COLD DEAD EYES! to my neighbour who doesn’t get out much.  Over the years, there has been a persistent and rather macabre urban myth circulating that gulls will explode if they’re fed Alka-Seltzer. Sadly, we’re here to inform you that this isn’t true.

Though the myth has many subtle variations depending on where exactly you’re reading it, it basically reads as follows. If you feed a hungry gull an Alka-Seltzer tablet or a similar product (gulls aren’t really that discerning when it comes to their choice of indigestion relief if we’re honest), upon hitting the bird’s stomach, the tablet will work its magic and cause the gull to violently explode into a cloud of feathers and intestinal confetti. Why the myth always seems to involve gulls instead of another bird is presumably due to seagulls’ propensity to eat damn near anything we humans throw them.

Some variations on the myth try to add a little science to the mix (while simultaneously demonstrating why you should never trust any answer on Yahoo Answers and the like) by insisting that birds lack the ability to pass gas, which causes the deadly and explosive build-up in the unfortunate bird’s stomach that eventually causes it to paint the side-walk with its insides.

Our guess is that this pseudo-scientific, kind-of believable explanation is why the myth continues to persist even to this day, despite a clear and apparent lack of “OMG, watch these seagulls explode” videos on YouTube. (There are a couple out there… but let’s just say the makers of the videos perhaps should have hired out for better video effects if they wanted to be more believable, rather than clearly just using things like fireworks stuffed in dead birds or the like.)

We will admit, though, the reasoning is rather convincing on the surface; we personally have never heard a bird pass gas and that’s certainly not something usually covered in standard education systems.

Of course, once you spend a couple seconds thinking about it, even with just a basic knowledge of our feathered friends, you should easily be able to see the whole “Alka-Seltzer / exploding bird” thing doesn’t make sense regardless of their ability to give a cloacal salute. (Hint: How do baby birds get food?)

But don’t take our word for it, as veterinarian Mike Murray explains, just because birds don’t typically pass gas, it doesn’t mean their bodies aren’t equipped to do so if necessary; if a bird ever needed to burp or fart, it could; it’s just that its diet doesn’t typically require it to need to.

As for air coming out the other end from their derriere’s, to quote renowned bird-nerd and Director of Conservation and Field Research at an aviary in Pittsburgh, Todd Katzner.

The fact that birds can regurgitate food for their young suggests that they can also reverse the direction of other things down there.

And, of course, if they can pass gas on the one side and regurgitate food and gasses on the other, Alka-Seltzer simply isn’t going to hurt them.

Weirdly, this isn’t the only myth involving exploding birds, for example, there’s an oft repeated “fact” thrown around that you shouldn’t throw rice at weddings, or at all, because birds eat it, which causes it to swell up in their stomachs, killing them. In some versions, the rice causes them to violently detonate, but we presume this only happens when Michael Bay manages to get his hands on the rice first.

As with the Alka Seltzer myth, there is zero evidence to back up this claim and quite a bit of evidence to the contrary (besides just the simple fact that the birds can regurgitate, so even if it expanded too much, they could just do that if it became uncomfortable).

For instance, a 2002 study was done on this subject by biologist Jim Krupa of the University of Kentucky that was later published in a 2005 edition of the journal, The American Biology Teacher.  Krupa was inspired to do a study on birds and rice after an almost even split occurred among his 600 students when he asked them if throwing rice at weddings was harmful to birds (45% thought the rice would kill the birds).

They started by experimenting with the expansion of various grains that birds commonly ate in order to see what the birds’ systems could handle.  What they found was that typical bird seed (the type that is now sometimes thrown at many weddings owing to the bird/rice myth) actually expands more than rice, at 40% expansion over rice’s 33%.  However, one type of rice did show pretty remarkable expansion- instant rice. Brown instant rice expanded at 240% its original volume and white instant rice expanded at 270%.

Few people throw instant rice at weddings as it’s a lot more expensive than “regular” dried rice, but the question remained as to whether instant rice could burst birds’ bellies or other parts of their digestive system. Again, getting around the bird’s ability to regurgitate, conceptually it seems like instant rice wouldn’t be a problem given how long it takes even dried instant rice to absorb moisture at around a bird’s  typical body temperature (for reference, pigeons sit around 100-110 degrees Fahrenheit or 37.7-43.3 degrees Celsius).

Given that it seemed to them safe enough to try from a conceptual standpoint, they decided to go ahead with testing instant rice out on real birds (Krupa owned 60 doves and pigeons), which he fed a diet of nothing but instant rice and water for 12 hours, as much as they wanted.

How the myth that rice will cause birds’ stomachs to explode started isn’t known, but it has been around at least since the 1980s.  In 1985, a state representative from Connecticut, Mae S. Schmidle, decided to do what seemingly all politicians do all the time- pass laws that are based on subjects they are woefully ignorant about while not bothering to do any real research to educate themselves on it.

Specifically, Schmidle attempted to pass a law forbidding people from being able to throw rice at weddings to “prevent injury and death of birds as a result of ingesting raw rice thrown at weddings”, called “An Act Prohibiting The Use Of Uncooked Rice At Nuptial Affairs”.  The proposed penalty for breaking this law was to be a $50 fine.

The rice that’s left, that’s not in your hair or on your suit or in your bouquet, you leave for the birds.  Unfortunately, when the birds eat the raw rice, they cannot digest it. When it gets in their stomachs, it expands and causes them to have violent deaths. I’ve heard from several ministers who say that the next morning after a wedding, they see all these birds toppled over because they got poisoned by the rice.

In truth, there is not a single documented instance of this ever happening.

Several ornithologists came forward and expressed their extreme skepticism over Schmidle’s claims, such as Roland C. Clement, president of the Connecticut Ornithological Association, who stated,

It sounds crazy. I have 50 years of professional experience as a practicing ornithologist and I’ve never heard of such a thing before. Of course, there can always be a first time, but I would have to see some evidence before I would promote the idea.

As no such evidence could be produced,  the bill was never passed.

Today a good deal of people continue to believe this rice myth thanks to a cocktail of anecdotal evidence, ignorance and the fact that most churches ban people from throwing rice at weddings.  In regards to the latter, the reasoning behind this has less to do with protecting birds and more to do with the fact that churches don’t want to spend hours after every wedding they hold cleaning their grounds of rice.