January 15, 2014 Matt Blitz 12 comments
Masen P. asks: Where did the expression “have your cake and eat it too” come from? 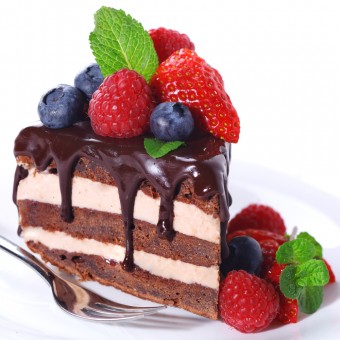 The idiom “You can’t have your cake and eat it too” deliciously illustrates the concept of making trade-offs and realizing that you can’t have something if you have another. The phrase is often used when referring to compromises and alludes to making a choice between two options that could never be reconciled. In other words, the two options that are mutually exclusive.

Other cultures have adopted the spirit of this phrase to fit into their own languages. For example, in Russian the (translated) phrase is “You can’t sit on two chairs.” In German, the saying goes “You can’t dance at two weddings.” In Yiddish, the adage goes much like the German, except “one tuchis” is added on to the end. Tuchis is Yiddish for backside, or less delicately, the butt; so, “You can’t sit on two chairs with the same butt.”

Of course, with the cake expression… I mean, it’s your cake; why can’t you eat it too? Surely that can’t be the original expression, as it doesn’t make sense as written. So where did this expression come from?

The phrase was actually used as early as 1538 in a letter from Thomas Howard, the third Duke of Norfolk, to Thomas Cromwell, chief minister to King Henry VIII. In the letter, found and archived by British History Online, Duke of Norfolk writes:

I require you to send me, by this bearer, my will, which ye have sealed in a box. I must alter things therein, for my substance in money and plate is not so good now by 2,000l., “a man can not have his cake and eat his cake.”

The idiom was later published in A Dialogue Conteynyng Prouerbes and Epigrammes by John Heywood in 1562. Heywood switches the clauses so it reads, “Wolde ye bothe eate your cake, and haue your cake?” (Several other well-known phrases or “figures of speech” have been attributed to Heywood, including “two heads are better than one” and “Rome was not built in a day.”)

Over the next few hundred years, the phrase regularly showed up in books, plays, and other writings. For instance, in 1738, the phrase showed up in Jonathan Swift’s political satire “Polite Conversation” when the character Lady Answerall exclaims, “She cannot eat her cake and have her cake.” According to the New York Times, Swift’s plays were well-known at the time for mocking and satirizing language. It appears that, with Swift’s use of “cake,” he was in fact commenting on the silliness of the phrase.

Linguists have debated for years over the proper order of the verb phrases. Up until the 19th and 20th centuries, more often than not, the proverb would read in some variation of “You can’t EAT your cake and HAVE it too,” which of course makes a tad more sense than the modern version; though in the end, the basic sentiment is the same- once you eat your cake, no more cake!

But according to Google Ngram Viewer (a handy tracker of usage of phrases in published works over time), somewhere between 1938 and 1939, the percentages switch and “You can’t HAVE your cake and EAT it too” became more prevalent. Right around this time, President Franklin D. Roosevelt used the now less common version of the proverb in his 1940 State of the Union address when referring to the need to increase spending for national defense:

As will appear in the annual budget tomorrow, the only important increase in any part of the budget is the estimate for national defense. Practically all other important items show a reduction. But you know, you can’t eat your cake and have it too.

As alluded too above, some linguists have insisted that “Have…Eat” iteration is not correct due to the actual plausibility of the statement. You, in fact, can have your cake and then eat it. That isn’t impossible, therefore it negates what the actual idiom stands for, not unlike the common error of saying, “I could care less!” when one means “could not care less.”

On the other hand, eating it and, then, having it is impossible and absurd, hence why this statement is in fact the correct turn of phrase.

Despite the “Have…Eat” version being more prevalent in today’s society, one amateur linguist in particular insisted on using the “correct” version in a manifesto he wrote. That person was Theodore J. Kaczynski, aka the Unabomber.

“The Unabomber” had been mailing and placing homemade bombs aimed at maiming people who were involved with modern technologies since 1978. The FBI had been trying to track him down for decades. Finally, in April 1995, the FBI had a break in the case when the Unabomber’s manifesto entitled “Industrial Society and its Future” was sent to major publications across the country and was, under the threat of violence, demanded to be released to the public. If it was with conditions met, he promised to stop his bombings.

In September 1995, it was published in the New York Times and Washington Post. In it, he derides that the industrial revolution has been a “disaster for the human race” and calls for a “revolution against technology.”

Additionally, he provides this phrase: “As for the negative consequences of eliminating industrial society — well, you can’t eat your cake and have it too — to gain one thing you have to sacrifice another.”

Upon seeing this phrasing in the morning paper, David Kaczynski finally decided his wife might be right and his brother really might be the Unabomber. For their whole lives, their mother would correct them and insist that this was the correct usage of the phrase. This and other similarities in Ted’s writing style and his political beliefs, convinced David he needed to speak up.

David passed this information, along with old family letters demonstrating Ted’s writing style, to the FBI who employed forensic linguistics to compare the manifesto to other pieces of writing Ted had given to his family.  This information, and other stylistic evidence, convinced a judge to submit a search warrant.

On April 3, 1996, Ted Kaczynski was arrested by the FBI at his cabin deep in the woods of Montana. His own demand to be heard did him in. As the Unabomber would say, you can’t eat your cake and have it too.