January 2, 2014 Melissa
Brian asks: How do bats tell whether it’s their own squeaks they’re hearing or another bat’s? Does this ever confuse them? 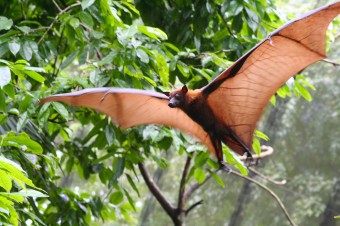 Seeing with sound, bats can find their way around by bouncing sound waves off of objects. Called echolocation, it allows a bat to navigate the world with impressive accuracy and speed.

However, each bat, even within a swarm, needs to emit its individual calls in order to navigate in certain conditions. (Note: contrary to popular belief, bats are not blind)

As you can imagine, that’s a lot of sound waves bouncing around, and there is bound to be some overlap. Yet, despite the potential for interference, bats rarely are confused by their comrades’ calls.

Over half of the around one thousand bat species navigate via echolocation. Whether the sound begins with the contraction of the larynx muscles crycothyroid or the click of a tongue, bats emit calls, usually through their mouths, but sometimes through their nostrils.

These initial calls are intense and could cause temporary deafness. To thwart this, a few milliseconds before the call is made, the stapedius, a muscle of the middle ear, contracts to separate the hammer, stirrup and anvil, and dampen the effect of the strong sound. Shortly thereafter, the stapedius relaxes, and the bat can receive the echo of his call.

The returning echo is captured by the bat’s specially shaped ears and funneled through wrinkles and folds to its inner ear. There, highly concentrated receptor cells that allow bats to detect even the smallest changes in frequency (as low as .1 Hz) to capture the echo. From this, the bat can detect the size, shape, direction and distance of its prey, as well as other objects.

A typical bat hunt would proceed as follows:

When a bat begins to echolocate it usually produces short millisecond long pulses of sonar . . . and listens to the returning echoes. If prey is detected by the bat, it will generally fly toward the source of the echo continuing to emit sounds and focus more accurately on the prey. As the bat gets closer and closer to the target the sonar pulses are emitted faster with a shorter duration. This happens until the bat is right upon the prey, at which time the bat scoops the insect up into its wing membranes and into its awaiting mouth.

The increasingly frequent echolocation as the bat nears its prey, which requires the action of superfast vocal muscles, can reach speeds of “190 calls per second” and is sometimes referred to as the “terminal buzz.”

Sound frequency is measured in terms of cycles per second, more commonly called Hertz (Hz). Humans hear in the range of 15 Hz (15 cycles per second) to 20 kHz (20,000 cycles per second). Bats echolocate at frequencies ranging from 20-200 kHz, so most of this activity is ultrasonic; that is, not perceptible to the human ear.

In order to distinguish its calls from its buddy’s, many bat species will simply change the frequency (sometimes called pitch) of their echolocation. In an experiment conducted on Brazilian free-tailed bats, researchers noted that where sound frequencies were very close (less than 3 kHz), individual bats would raise the pitch of their own calls: “For example, if a foraging bat’s initial calls registered at 26 kHz and it encountered a 24 kHz . . . it would shift its pitch to 27 kHz.”

Other bats use different methods. For example, some studies “have shown that groups of bats flying in the same area exhibit a larger variation in frequencies compared with ‘virtual groups’ constructed from calls of bats flying alone.”  Other research revealed that for some species, “when two bats were flying together,” “long-term ‘static’ frequency shifts as well as more rapid dynamic . . . 1 second time-scale” shifts both occurred.

In fact, some bat species are able to temper the energy of a portion of their call so that only they can hear it:

The moustached bat . . . overcomes interference caused by other bats’ calls by suppressing the first harmonic in its sonar pulse . . . . It is then so weak that other bats are very unlikely to hear it. However, the bat hears its own first harmonic directly through the tissues between vocal chords and cochlea [and it opens] a timed neural gate that enables the bat’s auditory system to receive and process the echo from that call. The bat does not hear and respond to the weak first harmonics of other bats [and] it is not therefore confused by the presence of other echolocating bats.

Bats are not the only mammals to see with sonar; dolphins and toothed whales can also navigate with echolocation. In fact, recent research is revealing how alike the echolocation of otherwise unrelated species can be.

In a 2013 study that “focused on the 2300 genes that exist in single copies in all the bats, the dolphin, and at least five other mammals . . . 200 genes had independently changed in the same ways,” and many of these, including “mutations in a particular protein called prestin . . . affects the sensitivity of hearing.” Called molecular convergence, the research strongly suggests that the trait of echolocation evolved “through the same sequence of steps” in both bats and dolphins.

Our studies have shown that the sounds of bats and toothed whales are surprisingly similar. This is due to two things: First, all mammalian ears are developed in quite similar ways, and second, – which is the most surprising – the contradicting physical conditions in air and water along with the differences in the size of the animals even out the differences . . . .

This last means that although the “acoustic field of vision” is much larger in water, because the whale moves slower, the fast bat is able to compensate for his significantly smaller acoustic field with his tremendous speed.