January 3, 2014 Melissa
Mark asks: Does the president have to report food, transportation and other such gifts from taxpayers on his taxes? 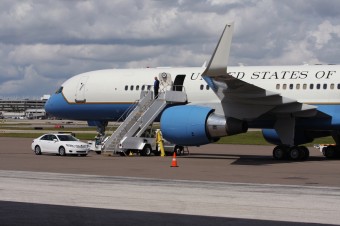 No. And although it’s difficult to find an official explanation (or even a detailed one), I think the answer lies in the United States’ ridiculously complicated tax code.

The transportation, security, housing and other benefits received by the President and his family are not gifts. But assuming they were, neither Barack nor Michelle would have to pay any tax imposed.

Under U.S. Income Tax law, in particular 26 USC § 102(a), gifts are, with some exceptions, specifically excluded from taxable income:

Gross income does not include the value of property acquired by gift, bequest, devise, or inheritance.

Rather, taxes owed for any gift are governed by U.S. Estate and Gift Tax law, specifically 26 USC § 2502(c) which imposes the burden of paying any taxes due on the person who made the gift:

The tax imposed by section 2501 shall be paid by the donor.

This gift tax will kick in once the yearly value of any gift exceeds the annual exclusion rate per person (for 2013, $14,000) or once the total amount of gifts given over a lifetime exceeds the lifetime exemption for both gifts and transfers on death (for 2013, $5,250,000).

So, were the perks of Air Force One and the White House considered gifts, even discounting hyperbolic claims to reflect reality, We the People would owe the IRS some dough on our “gifts” to the President. Which, of course, is absurd.

But, luckily, these extras are not simply the largess of the people, but rather, are necessary for the President to do his job. As such, according to federal tax law and regulations, the gratis transportation, food and housing received by the our Commander-in-Chief are non-taxable fringe benefits. (Note: at one time the President actually had to pay for all this type of stuff himself, including any White House expenses, which is partially how Thomas Jefferson became so hugely in debt. This was also a financial burden on rare non-independently wealthy Presidents before the law was changed, such as James Garfield who had previously been a janitor, carpenter, and a school teacher, among other things. When he was President, he didn’t even have enough money to own a coach and had to borrow one to get around.)

Defined by the IRS as “a form of pay for the performance of services,” fringe benefits are often taxable as income to the employee who receives them. However, there are certain perks that are specifically excluded from the imposition of income tax, for regular Joe’s and the President alike:

Although I was unable to find support for this proposition, it appears that this exclusion (26 USC § 119) would apply to the keep the White House, its staff (including a private chef) and certain meals out of the First Family’s taxable income. It provides in pertinent part:

In the case of the President, this also applies to vacation homes and travel. As historian Richard Norton Smith said:

That said, the President and his family are responsible for paying for certain items, including “all their own groceries, drinks, dry cleaning and even their toothpaste.” Although as one commentator wryly put it: “the private chef then prepares dinner using those groceries.”

When it comes to excluding Air Force One, the Presidential limousine and all of the security for himself and his family, Jason Jay Sharma on Quora put up his theory of how the working condition fringe exclusion applies to keep income from being imputed to the President:

If you start with Treasury Regulation 1.132-5 . . . you find the rules regarding fringe benefits. President Obama would be defined as a government employee according to (m)(7)(i) [and as such] is provided transportation for security concerns (m)(i) . . . . spouses and dependents of government employees are extended this service as it is deemed a security concern exists for them, too – all of which is excluded from Obama’s gross income, as well (m)(2)(iv).

In fact, it appears that under even a general reading of the regulation (26 CFR § 1.132-5), the security and transportation provided would be excluded from the President’s income, to wit:

Income does not include the value of a working condition fringe [which is] any property or service provided to an employee . . . to the extent that, if the employee paid for the property or service, the amount paid would be allowable as a deduction . . .

This certainly appears to be the case, as each of these expenses would be incurred as a result of his employment as Leader of the Free World. As one former White House insider noted: “The presidency is a full-time job in the 24-hour sense. He must function and be able to function as president all the time.”

Regardless of whether these laws and regulations or others support the President’s privilege to enjoy the perks of the office, that right remains unquestioned. As a former advisor to Presidents Carter and Ford recently said:

Gifts to the President of the United States

Utilization, Donation, and Disposal of Foreign Gifts and Decorations