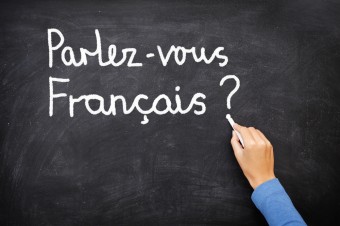 Centuries before Cameron shouted this over the phone to principal Ed Rooney, English-speaking people had been using the phrase “Pardon my French” to excuse their use of profanity. But why is it French and not Chinese, Swahili or nothing at all? The answer lies in European history.

Since the Norman Conquest in 1066, the French have alternately pissed off, and looked down upon, the British. By 1337 when the two countries began the Hundred Years War, English opinion of French soldiers, as expressed by Shakespeare’s King Henry V, was pretty low: “I thought upon one pair of English legs did march three Frenchmen.”

Centuries later, hatred of the French by English speakers boiled over into the colonies. During the French and Indian or Seven Years War (1756-1763), according to James Fenimore Cooper’s Last of the Mohicans, the British commander, General Webb, said of the French:

Kindly inform Major Heyward that he has little to fear from this General Marquis de Montcalm . . . because the French haven’t the nature for war. Their Gallic laziness combines with their Latinate voluptuousness with the result that they would rather eat and make love with their faces than fight.

Even after France’s revolution (1789), relations between the nations did not improve. From 1793 through Napoleon’s defeat at Waterloo in 1815, Britain and France engaged in the Napoleonic Wars. As bitter a global conflict as ever fought, English opinion of the French was summed up by Vice Admiral Horatio Nelson:

There are three things, young gentlemen, which you are constantly to bear in mind. Firstly, you must always implicitly obey orders . . . Secondly, you must consider every man your enemy who speaks ill of your king; and thirdly, you must hate a Frenchman, as you do the devil.

Carrying their antipathy for the French into civilian life after the wars, English speakers were now using the word “French” to denote all things perceived to be lewd and obscene. By the first half of the 19th century, syphilis was known as the “French pox”, pornography was a “French novel” and condoms were called “French letters”.

Pardon (Excuse) My French through the Ages

Still bitter after the end of the Napoleonic wars, even by the 1830s it seems as if speaking any French in England was the equivalent of farting in polite company. An early example of how the expression was used to apologize for having the bad taste to speak in that despised tongue comes from Baron Karl von Miltie’s 1831 The Twelve Nights:

Bless me how fat you are grown . . . you will soon be as embonpoint (excuse my French) as your dear father.

The deprecatory use of the word “French” was adapted, and in addition to identifying something as pornographic or profane, it also became an apology for using obscene language. The earliest example of this usage I can find is in Henry Sedley’s 1865 work Marian Rooke; Or, The Quest for Fortune: A Tale of the Younger World: “Dreadful good brandy o’ yourn. Ha! ha! ha! My respecks. Excuse My French.”

Using the phrase to smooth the rough edges of inappropriate profanity became ever more popular and by 1940, the Society of Pure English specifically listed “forgive my strong language” as one meaning of the expression “Excuse my French!”

As an Artistic Device

Building on this latter use for the phrase, screenwriters, actors, comedians and recording artists, particularly in America, have used versions of the expression to great effect.

When discussing how badly he’s going to beat his handsome opponent, Tony Janiro, Jake La Motta claims: “I’m gonna open his hole like this. Please excuse my French. I’m gonna make him suffer. I’m gonna make his mother wish she never had him . . . ”

The phrase actually appears twice in the movie. In addition to Cameron’s insolent invective toward a school administrator, Ferris, ironically, uses it to describe his friend: “Pardon my French, but Cameron is so tight that if you stuck a lump of coal up his ass, in two weeks you’d have a diamond.”

This cult classic incorporates a running joke around the expression. Seismologist Rhoda LeBeck and regular bros Valentine McKee and Earl Bassett all take turns using it, such as when Earl yells: “You little asswipe! You don’t knock it off you’re gonna be shittin’ this basketball . . . pardon my French!”

In the episode “The Soul Mate,” while trying to illustrate to Elaine the extent to which a man would lie to win over a lady, George says, “I once told a woman that I coined the phrase, “Pardon my French.”

During an episode of the recurring and hilarious “Celebrity Jeopardy,” Norm MacDonald as Burt Reynolds tells Will Ferrell as Alex Trebek: “Hey, uh, I speak a little French. You’re an assbite, pardon my French.”

In explaining to investigative journalist Chris Chandler his involvement in the “Pay It Forward” scheme, Sidney Parker says, “The world is a shithole, pardon my French an’ shit.”

Saving the best for last- and if you thought the above were too vulgar, you might want to skip reading this one ;-)- here’s Jim Carrey as Steven Russell, desperately, obscenely and vociferously struggling to get his golf ball out of a sand trap (but remembering his manners in the end):

“Fuck me with a flaming fist! Eat my asshole! Oh, fuck! Shit. God awful whore! Cocksucker! Take this you little twat . . . .Pardon my French. My mother smoked during pregnancy.“